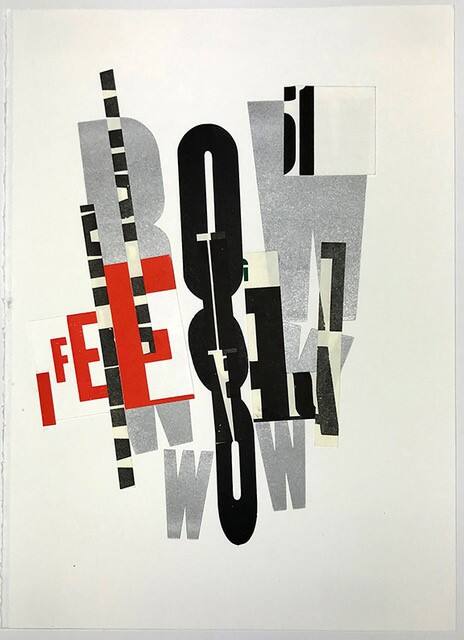 Laurie Szujewska is a printmaker, typographer and graphic designer who lives in Sonoma Mountain. His works have been exhibited in various venues across Europe and the United States, and are included in the artist’s book collections of many universities and libraries, as well as in private collections.

Currently, his prints are on display in the Wine Snob * tasting room at 969 Carquinez Ave. to Glen Ellen. The artwork comes from Szujewska’s Alphallage Collection, a series of collages created from reconfigured original prints and prints of his typography.

Opened by Lindsey Blanchard and Ryan Kuhlmann, residents of Glen Ellen, the new tasting room and gallery will host a celebration on Saturday, September 25 to open the salon with wine and art from 11 a.m. to 5 p.m.

As an artist, Szujewska uses typography not as a reproduction machine but as a marking tool: instead of multiplying an intentionally designed shape, she manipulates the shapes and runs a sheet of paper through the press multiple times. She applies color directly to the type or plate in the press bed using brayers and brushes, allowing her to print multiple colors at a time and edit or add to the palette. colors like a painter.

Its process is to play with the setup and see what happens, taking advantage of chance and surprise, and letting the results emerge from the printing process itself.

Szujewska made her impressions on a Vandercook typography, which she became familiar with while working in the printing trades and studying at the Center for Book Arts in New York. She was a founding member and graphic designer of the New York performance venue, Roulette, and a member of the experimental performance group, The Chairs. After earning her MFA at the Yale School of Art, she moved to California, where she became Art Director and Designer at Adobe Systems, where she created award-winning graphics and the Giddyup typeface. She taught in the design department at UC Davis and was a guest artist at Reed College.