Why a New Jersey tech company bought a bunch of newspapers in Greater Minnesota. And what he wants to do with it. 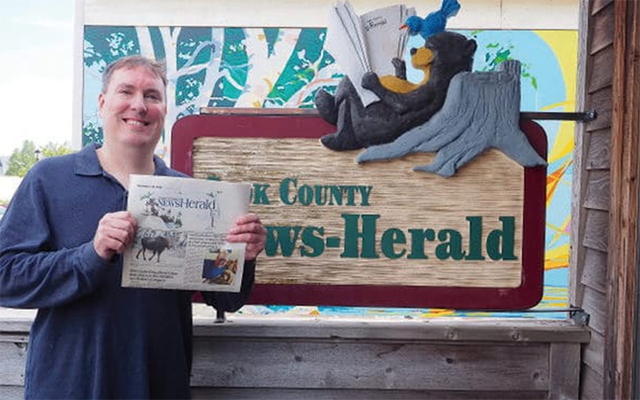 The news came out of nowhere. Brian Larsen, editor of the Cook County News-Herald in the Grand Marais, had no idea the weekly he worked for 13 years was up for sale until outgoing owners Hal and Deidre Kettunen le announce to him during a pizza lunch at the office in November 2020.

Moments later, still in shock, Larsen watched as the new owners walked into the break room and introduced themselves. Larsen had never heard of the company, a New Jersey-based information technology company called CherryRoad Technologies, its CEO, Jeremy Gulban, or any of its other executives. It was not surprising. CherryRoad had no media involvement prior to buying the News-Herald, although that was soon to change.

Before long, CherryRoad Media, the company’s new communications division, was on a newspaper-buying spree, primarily in the Midwest and South. He purchased seven Minnesota newspapers formerly owned by Gannett, Inc. and started one in International Falls. CherryRoad now owns 49 newspapers in 10 states, including the Lake County Press, which opened in Two Harbors last month.

It’s a strategy Gulban hopes to showcase CherryRoad Media’s technology offerings while bolstering local news products laid bare by the for-profit chain’s ownership. Gulban says CherryRoad plans to invest in these newspapers, not mine them for their assets. It’s a refreshing change from the shark tank world of corporate journalism.

“As I got involved with it, I really realized how big (for) a small community the paper really is,” Gulban said in a phone interview from CherryRoad’s Parsippany headquarters. , N.J. “When you go to these small rural communities, there’s really no other real source of information. People really rely on the local newspaper to provide that. It really is an institution in the community.

“What I’ve also learned is that it takes a tremendous amount of attention to detail to run these small newspapers, and I think big companies aren’t necessarily suited to that. We are, because we are a small organization. We are more agile. We are more able to react. The number of calls I get every day from the various small newspapers we have that need to be answered, it’s very difficult for a large organization to handle something like this.

One important caveat: Just because CherryRoad is a tech company doesn’t mean all functions are moving online. Gulban understands many readers like a newspaper in their hands, so CherryRoad will continue to publish print editions. It’s a relief for Larsen, 65, a printing guy at heart and one of the News-Herald’s two full-time employees, part editor/reporter/advertising director and from production.

“Hal and Deidre said they were a month away from closing the paper when Jeremy bought them out, so it was a godsend that Jeremy came in,” he said.

Prior to purchasing the News-Herald, Gulban had no ties to Minnesota or the newspaper industry. His father Michael founded CherryRoad in 1983; the name derives from the company’s original address. According to Dun & Bradstreet, the company generated nearly $98 million in revenue in 2020. Gulban joined the company after graduating from Drew University, a small private liberal arts college in Madison, NJ, where he majored in economics and minored in political science.

“I’ve always been very interested in politics and government,” Gulban said. “I guess I kind of realized through that process that I was still in the news, probably way more than I would have acknowledged. But no formal training in journalism or news. Just sort of resume as we go here.

When the pandemic hit, Gulban said CherryRoad created technology tools to help school districts and local governments meet learning and communication challenges. They offered them around, for free, but found no takers.

“Everyone’s response was, we’ve already covered everything. We use Google, we use Facebook, we use YouTube,” Gulban said.

“We started looking at other ways to make a difference and use alternative technology sources outside of big tech companies. We considered newspapers as a possibility because 2020 has been such a brutal year for newspapers, with the pandemic and the closure of a number of newspapers.

According to Poynter Institutemore than 100 local newsrooms have closed since the start of the pandemic, accelerating a trend that has seen about 1,800 newspapers closed since 2004. Most were weeklies in small towns like Warroad, which lost the Pioneer in 2019, and Two Harbors, where the Lake County News Chronicle closed in 2020.

Gulban looked for a small weekly to buy and found the News-Herald listed generically on a website. Steve Bragg, a business broker at Arrowhead, placed the ad, describing the paper in general terms to prevent employees from finding out it was for sale. Gulban contacted Bragg for more information, and the two hit it off.

“He’s such a nice guy, you couldn’t help but keep talking to him,” Gulban said. “If he hadn’t been as friendly as he was, I probably would have said it was a very bad idea. But he was a good guy, very engaging.

Bragg said there were other interested parties, but none moved as quickly as Gulban, who flew to Minnesota to meet with him before closing the deal.

“He was really cordial asking all the right questions throughout the process,” Bragg said. “He was really easy to deal with, like he did this over and over again. Everything went well, and if there was any problem, he was very accommodating. He was fun to deal with. I hope I can do business with him again on something.

Gulban was astonished to learn that in a county of 5,600, the News-Herald had about 2,200 subscribers and sold an additional 1,000 copies to vacationers during the summer. “That’s huge population coverage,” he said. “If every newspaper matched this level of interest, newspapers would do just fine.”

Soon after, when Gannett sought to divest itself of smaller Kansas and Missouri newspapers, CherryRoad stepped in. Then the seven Southwest Minnesota newspapers that Gannett acquired after merging with GateHouse Media in 2020 came on the market, and CherryRoad bought them as well.

Ten years ago, Stölen-Jacobson quit the Tri-County News and opened a shop, exhausted after GateHouse cut staff and cut her salary. But she missed out on journalism and signed up for Montevideo last April, in time to respond to complaints about a host of Gannett-imposed changes, including the newspaper’s design at USA Today.

“It was very upsetting for people, especially in Montevideo,” she said. “They didn’t like their newspaper to look like all the other newspapers on the newsstands. They didn’t like to see the staff leave en masse, which happened when Gannett took over.

Under CherryRoad things are looking up. The company is trying to hire a reporter in Granite Falls, and Gulban asked Stölen-Jacobson to think about how she wants the newspaper and website to look. Gluten hopes to roll out individual website redesigns for all CherryRoad properties in about a month, all with local input and no one-size-fits-all template like Gannett’s.

“CherryRoad did a really good job of making those decisions in our possession and giving us time to think about them as well,” Stölen-Jacobson said. “They prioritized investing in content, which is a new concept for anyone who’s worked at bigger media companies.”

Gulban believes there is a market for local news in these communities. He wants to give readers more, not less. “I think bringing the news down to the local level will help a lot,” Gulban said. “These newspapers have lost circulation in recent years as people have realized that I can get my news elsewhere, why am I subscribing to this? And bringing it back to stories that matter locally will get more subscribers. Same thing with advertising.

“We also want to bring more digital advertising and technical services around websites. I think things like that can provide more value to a company. If you are considering advertising in print, we can also do digital advertising, have your website hosted for you, and bundle some of those expenses into a better value package.

In the Grand Marais, CherryRoad quickly put money into the News-Herald. New desktop computers replaced those that Larsen said were so old that technicians called in to fix them laughed. CherryRoad also purchased a new camera for the newsroom and outfitted the office alcove, adding a picnic table and flowers.

Hansen interrupted his phone interview with MinnPost to take a call from a subscriber. This is what happens in an office with a team of two people. Upon his return, Larsen had good news: the subscriber requested to replenish for two years instead of one. You could almost hear his smile widen.

MinnPost’s in-depth, independent news is available to everyone for free – no paywall or subscription. Will you help us keep it that way by supporting our nonprofit newsroom with a tax-deductible donation today?