Westword Mo’Print Essentials for 2022: Week One

The region’s biennial printmaking month 2022, popularly known as Mo’Print, has been sprouting exhibitions large and small in the city since January. But the celebration becomes official in March, starting this weekend with a slew of First Friday openings and events, including these Westword Choice of Mo’print.

Here is the first installment of our Mo’Print Best Bets for 2022:

Mo’Print has a reputation for buying art at bargain prices, but the Black Ink fundraising event is the mother of it all. As well as serving as the official celebration of Printmaking Month, it’s a gateway both for art collecting and for those who want to see the rest of the Mo’Print imprint that is spreading throughout. the metropolitan area. Brew a beer and browse dozens of 8 x 6 inch black and white linocuts printed on 13 x 10 inch sheets. The price is $10 per print and, being the first Friday, the night is young for art explorers.

Science meets engraving in the work of artist Raymundo Muñoz.

A familiar face in the Birdseed Collective’s Alto gallery, Raymundo Muñoz is a scientifically trained printmaker, and here he leaves behind the idea of ​​a simple relief print on a flat surface. Instead, Muñoz adds dimensionality to his images by folding surfaces into sculptural shapes, compiling them into zines, and introducing views one might see through a microscope. It’s just that folding space is on display in his personal gallery.

Peter Miles Bergman: Pact
Dateline Gallery, 3004 Larimer Street
Until March 31
Opening: Friday March 4 from 6 p.m. to 10 p.m.
Artists’ Tales: Wednesday, March 30, 7 p.m.
Peter Miles Bergman’s IS Press introduces a whole new dimension of the print medium when it comes to publishing, on a constellation encompassing both the simplicity of a zine or a handmade flyer and the craftsmanship of a an elegant printed publication. Pact is the result of a story that stretches back decades, to a time when Bergman and Dylan Kuhn, a friend from his youth in Wyoming, were inspired to tackle the grueling 2,650-mile Pacific Crest Trail after college, when they were 23 years old. But two-thirds into the adventure, the couple left the trail in Oregon, their bodies exhausted and wasted. And this is where the idea of ​​a pact comes into play.

They agreed to finish what they started 23 years later, meeting in Oregon for the final lap of the Canadian border. From the start, one of their goals was to photograph their daily progress, and these images, taken by Kuhn, form the basis of Bergman’s memoir dossier: PaCT: a journey beyond the horizona limited edition book and the 36-page zine with saddle stitching A journey through the in-between. Both with letterpress-printed covers, as well as the ingenious photo-animated flip book, PaCT: a journey through time, which runs through daily footage of Bergman — in a performance art act — throwing off a graduation cap and changing into a suit. The opposite pages show where each image was taken, on a black and white map.

Each piece is sold separately or together as a set; Be among the first to book one or all three at Dateline’s First Friday Book Launch Expo.

See the works of one-design master Joe Higgins at the Art Students League of Denver. “Autumn of the foothills”, monotype.

The Art Students League of Denver, another of the area’s popular printmaking hives, hosts an exhibit covering the full range of printmaking techniques taught at the Center for Continuing Art Education, as produced by student members and instructors. Not only will you get a glimpse of what’s possible in ASLD’s well-equipped studios, but it might inspire you to sign up for a class. The one-day portfolio exhibition, on the other hand, offers the opportunity to buy works of art directly from the creators.

See cone cutter Frank Kwiatkowski at work during his opening reception at Pablo’s on Sixth Avenue.

It wouldn’t be Mo’Print without a show by Frank Kwiatkowski, a pedicab driver who in 1999 started cutting up traffic cones to print poster images of street people, autobiographical stories inspired by his battle with diabetes and pedicab adventures. Usually, you can only buy his work on his website – or during a pedicab ride through the streets of downtown. Kwiatkowski will be in the house at the opening, giving demonstrations.

Mo’Print Dual Exhibitions
People’s Building, 9995A East Colfax Avenue, Aurora
From Sunday March 6 to March 27
Opening: Sunday March 6 from 2 p.m. to 5 p.m..
Aurora’s People’s Building is hosting two citywide exhibits: one for artists participating in Mo’Print’s Open Portfolio Day on Saturday, March 12, and the other for artists opening the doors of studios for the Studio and Print Tour on March 26 and 27. Members of Red Delicious Press, a printmaking studio located in the downtown Aurora district, lend a hand in organizing the shows.

And here’s a bonus: the wonderful engraver and educator Javier Flores is putting on a personal exhibition, Vulgar Symbolsat the People’s Building after the departure of those above, from April 1 until April 17. Attend the Opening Reception on April 1 from 4:30 p.m. to 7:30 p.m. 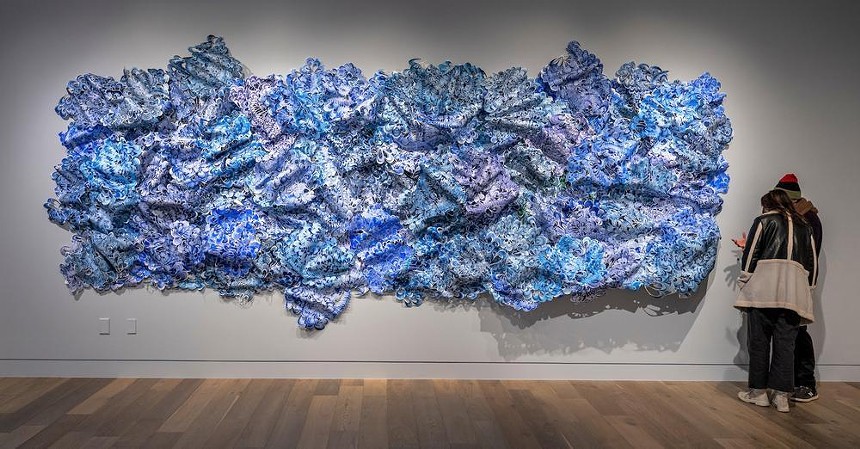 Hilary Lorenz covered her room with more than 16,000 printed paper moths, some self-created and others collected via social media from participants around the world. Butterflies do a double service by celebrating the power of pollination both in the plant world and in the world of art, where ideas are exchanged.

Taiko Chandler, well known for her sculptural Tyvek printed wall hangings and crisp abstract prints drawn in organic looping, colorful and vegetal shapes, takes a tour of her work in The indelible gardenand Tya Alisa Anthony presents Organic Tarota project that links the artist’s fascination with tarot with a reimagining of black history, offering a more human view of how his ancestors might have lived and loved.