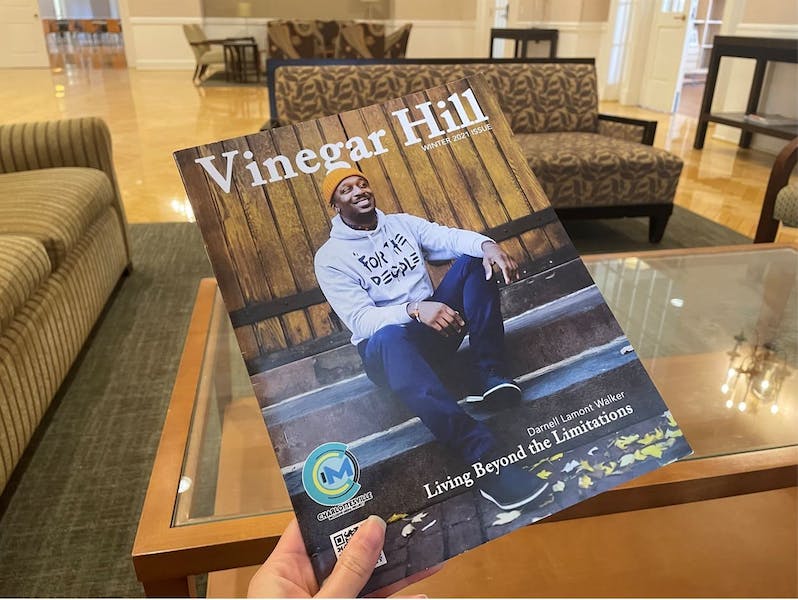 We’ve all heard the phrase “hidden gem” before, and now the University has its own between the shelves of the Ivy Stacks – Vinegar Hill Magazine. Founded in 2011, the publication is dedicated to amplifying black stories in Charlottesville, showcasing the voices of community members and promoting local small businesses. The publication is also available online from 2018 and will soon be available from the Clemons Library.

The Special Collections Library currently holds two issues of this publication from Summer and Fall 2017 – the result of an earlier motion to bring the magazine to Grounds by Architecture Research Librarian Rebecca Coleman. Going forward, the University will now hold an indefinite subscription to the publication and will also seek to collect all back issues. It wasn’t until this semester that Katrina Spencer, Librarian for African American and African Studies, first heard of the publication and began bringing this steady influx of copies to Grounds libraries.

According to Spencer, the University Library’s collections team holds regular meetings on diversity, equity and inclusion to discuss any gaps in the diversity of collections held by the University. The team had spoken specifically about local publications that could be brought to Grounds when Spencer offered Vinegar Hill Magazine as a potential collection.

“We had a session about different local groups within the Charlottesville community whose works we might be able to acquire and collect,” Spencer said. “We wanted to find out if there were any underrepresented groups whose work we could collect, and at that point…I knew about Vinegar Hill Magazine…so I suggested we collect it.”

After learning about the publication itself, Spencer reached out to Sarad Davenport, content manager and digital strategist for Vinegar Hill Magazine, to better understand its history and operations. Davenport has been heavily involved with the post since joining in 2012 and said the post was a community response to a clear lack of media representation for people of color.

“I personally wasn’t part of it when it started,” Davenport said. “The publisher – his name is Eddie Harris – and a group of people, grassroots people in the African American community who were unhappy with the local coverage of people of color issues, and especially those issues that portrayed … people of color as criminals [started it]. In the beginning…it was appealing to people because it was a response to exclusive media and it took a more inclusive approach.

As Davenport explained, the magazine title itself has a story behind it. Vinegar Hill was once a thriving black community between what we now know as Downtown Mall and the Corner. In the 1960s, a series of harmful redevelopments promoted by the City of Charlottesville displaced Black-owned families and businesses in this area, resulting in housing displacement and gentrification that still affects Black communities in Charlottesville to this day. .

Although its history has been sidelined for decades, Vinegar Hill still holds value to the Charlottesville-area black community. Davenport mentions how he hopes to reunite with this thriving community within the publication’s pages.

“What we’ve done with the Vinegar Hill story is try to reconstruct it,” Davenport said. “Maybe not in its original meaning, but [to] reconstruct it from a cultural and entrepreneurial perspective — [it’s] a decentralized version of itself where we can inspire people to remember a time when people were so invested in the community.

The latest edition of Vinegar Hill Magazine featured a discussion with Jocelyn Nicole Johnson, author of ‘My Monticello’, a conversation with Darnell Lamont Walker, a writer from Netflix’s new animated show ‘Karma’s World’ and a celebratory story about the first year in business for Me2U – a brick and mortar clothing store. Between those accounts, the publication promoted small, local businesses — many of which were black-owned.

According to Davenport, the magazine recently partnered with In my humble opinion on James Radio and Charlottesville Tomorrow as part of the Charlottesville Inclusive Media Project. As the publication continues to work through its go-live budget, Davenport hopes to have more writers and creators on board soon, noting that there are no restrictions on who can submit their work.

“Part of our partnership with Charlottesville Tomorrow is [that] we are really thinking about how we can support journalism and the profession and ensure that journalists and the profession [are] respected,” Davenport said. “We continue to work to improve the fielding… anyone can write for us, as long as it fits our archetype.”

Vinegar Hill has so much more to do to help reach other audiences in the Charlottesville community. Davenport wants to be able to provide resources to enable other local creators to be part of this magazine. There are aspirations to hopefully reach a national audience. Vinegar Hill aspires to continue changing the social narrative surrounding black communities.

“I want publication and I want us to be able to support content creators, artists [and] photographers in a way that allows them to live, work and play in Charlottesville,” said Davenport. “I also don’t see Vinegar Hill as something that’s going to be just local and regional…I think that can be more important if we continue to refine…who the audience is.”

The University Library System is currently working to add more of this publication and other publications like Vinegar Hill to its shelves. The University’s Video Collection Librarian, Leigh Rockey, explains the importance of including a wide range of representation in the University’s many libraries.

“One of the library’s biggest goals is to continually examine the strengths and weaknesses of the collections in terms of diversity, equity and inclusion,” Rockey said. “We are not just focusing on adding diversity as a project, but on equity of representation [in our] collections as lasting systemic change. We want to bring in students, faculty researchers – a broad representation of voices and communities – and we will engage with that for the foreseeable future, probably forever.”

Rockey said that while students will have to request the post on the University’s Virgo website for now since it’s being held in the Ivy Stacks, the next published post and most recent posts should be available soon at the shelves of current Clemons periodicals.

Spencer agreed with Rockey’s emphasis on the need for greater representation and equity in the Charlottesville and University community, adding that it should be one of the University’s missions to document a wide range of local stories, including those found in the pages of Vinegar Hill Magazine.

“The University of Virginia is considered the state’s flagship university,” Spencer said. “One of the missions of a university like this is to document local and regional life – to document the history but also the present and the future of life in Virginia. Charlottesville in particular…would not be the Charlottesville as we know it today without the black people It’s part of the fabric of this area [so] documenting black lives is necessary to really get the full picture.