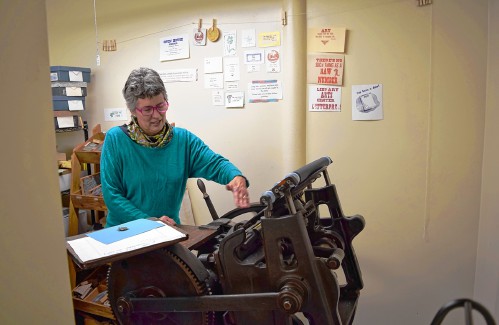 Before Kate Luppold became director of the Library Arts CenterMore than a decade ago, a typography sat in the basement of the nonprofit in Newport, NH.

Over the past few months, the press has been moved from its hiding place to a new typography studio, where BAC now offers an introductory typography course.

In addition to the basement press, which had been donated by Ted English and his family, BAC received a larger press and other printing equipment from Keith and Sylvia McElreavy, owners of the now closed Barrett Press in Newport, which used the press to print everything from wedding invitations to a high school newspaper before letterpress printing became obsolete.

The famous media theorist Marshall McLuhan postulated that old technologies, especially forms of media, do not die, but become art. Letterpress printing, such as the manual typewriter, vinyl records and film photography, is experiencing a resurgence in popularity.

For years, the Dartmouth Book Arts Studio has put a version of McLuhan’s theory into practice by offering printing and bookbinding courses to the university community. Bob Metzler of the Book Arts Studio helped former BAC board member Ann St. Martin Stout set up the typography studio in Newport, which now has nearly 100 illustration boards, 24 type drawers, and two sets of wooden characters.

Luppold said Wednesday that a woman who signed up for a typography class remembered using the biggest press to print the high school newspaper, which seems to come full circle.

Plans include adding classes and studio hours at the BAC to accommodate interest in typefaces. And if the presses lead to more book arts programs, great, Luppold said.

For more information, or to arrange a studio tour or take a class in typography (prior to using the presses), contact BAC at 603-863-3040.

“Considering Kunisada and his representations of Chushingura», an exhibition of prints by the wildly prolific and inventive Japanese engraver of the 19th century, is presented at the Matte Brown Fine Arts in Lyme until April 6. A talk and viewing party are scheduled from 2-5 p.m. on March 10.

Two Rivers Printmaking Studio organizes a series of workshops led by engravers from the Haute Vallée. The first, “Nontoxic Printmaking: Solarplates for Photographers,” taught by Linda Bryan, is scheduled for Saturday and Sunday. For more information and to see the full list of workshops, visit tworiversprintmaking.org.

Tunbridge Public Library. “Coming Into the Light”, paintings by Tunbridge artist Anna Ross, can be viewed through Monday.

BigTown GalleryRochester, Vt. “Late Works”, Varujan Boghosian’s recent “construction and collage”, and “A Muse: A visit to the studio of Varujan Boghosian”, a portfolio of photographs by Erick Hufschmid, will remain on view until March 16. .

Chandler Gallery, Randolph. “Paper Possibilities”, a collective exhibition of works made on and from paper by 10 artists, until March 2.

Chelsea Public Library. “Aspects of the Universe”, acrylic and watercolor paintings by Chelsea artist Marina Sprague, until next Thursday.

Jaffe Friede Gallery, Hopkins Center, Hannover. “Where We Come From” by Artist-in-Residence Emily Jacir. In the neighbor Strauss Gallery is “Book Arts in All Disciplines: Work Made in Dartmouth’s Book Arts Workshop”. Until March 3

Long River Gallery, Junction of the White River. ‘The Mind Is a City’, a multimedia work by Becky Coburn, of Amesbury, Mass., and ‘Photographic Vision’, by Matthew Sergeant.

Scavenger Gallery, Junction of the White River. “Bewildered”, recent work by Montreal artist Daryl Burtnett in a variety of media and jewelry by gallerist Stacy Hopkins.

Two Rivers Printmaking Studio, Junction of the White River. Work of the artists-members of the workshop. Until February.

Zollikofer Gallery, Junction of the White River. “Landscapes near and far”, paintings by the artist from Thetford, Jean Gerber. Until March 30.