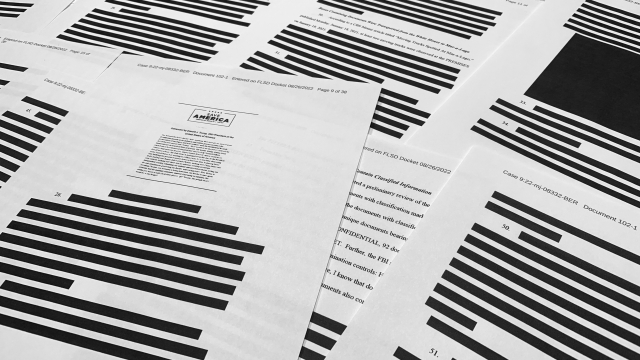 According to an FBI affidavit, no space at Trump’s Mar-a-Lago estate was authorized for the storage of classified material.

No space in Trump’s Mar-a-Lago estate was authorized for the storage of classified material, according to court documents, which outlined the FBI’s justification for searching the property this month, including “probable cause to believe that evidence of obstruction will be found.”

The 32-page affidavit – heavily redacted to protect the safety of witnesses and law enforcement officials and “the integrity of the ongoing investigation” – offers the most detailed description to date of the government records kept at Mar-a-Lago long after Trump left the White House. It also reveals the seriousness of the government’s concerns that the documents were there illegally.

The document clearly shows how the haphazard retention of top-secret government records and the apparent failure to protect them despite months of pleas by US officials has exposed Trump to new legal peril just as he lays the groundwork for another possible presidential election in 2024.

“The government is conducting a criminal investigation regarding the improper deletion and storage of classified information in unauthorized areas, and the illegal concealment or removal of government records,” an FBI agent wrote on the front page of the affidavit.

Previously released documents show that federal agents are investigating potential violations of several federal laws, including one that governs the collection, transmission or loss of defense information under the Espionage Act. The other statutes deal with the concealment, mutilation or suppression of documents and the destruction, alteration or falsification of documents in federal investigations.

Trump has long insisted, despite clear evidence to the contrary, that he is fully cooperating with government officials. And he rallied Republicans behind him by describing the search as a politically motivated witch hunt designed to damage his re-election prospects. He repeated that refrain on his social media site Friday, saying he and his reps have had a close working relationship with the FBI and “GIVES THEM A LOT.”

On Friday evening, his attorneys reiterated their request for an independent special master to be appointed to review the documents removed from the house, saying the redacted affidavit does not give Trump enough information about the reasons for the search or the materials that have been removed.

The affidavit does not provide new details about 11 sets of classified documents recovered during the Aug. 8 search at Mar-a-Lago, but rather relates to a separate batch of 15 boxes that the National Archives and Records Administration recovered from the house in January. The Archives sent the case to the Department of Justice, saying in its referral that a review showed “many” classified documents, the affidavit states.

The affidavit argued to a judge that a search of Mar-a-Lago was necessary because of the highly sensitive material found in those 15 boxes. Of 184 documents with classification marks, 25 were at the top secret level, the affidavit states. Some bore special markings suggesting they included information from highly sensitive human sources or the collection of electronic “signals” authorized by a special intelligence tribunal.

And some of these classified documents were mixed with other documents, including newspapers, magazines and miscellaneous printed matter, the affidavit says, citing a letter from the Archives.

Douglas London, a former senior CIA officer and author of “The Recruiter,” said it showed Trump’s disrespect for controls. “One of the rules of classified is not to mix classified and unclassified so that there are no mistakes or accidents,” he said.

The affidavit shows how officers were authorized to search much of Mar-a-Lago, including Trump’s official post-presidential “Office 45”, storage rooms and any other areas in which boxes or documents could be stored. They did not offer to search for areas of the property used or rented by Mar-a-Lago members, such as private guest suites.

The FBI submitted the affidavit, or sworn statement, to a judge so he could obtain the warrant to search Trump’s property. Affidavits usually contain vital information about an investigation, explaining why officers want to search a particular location and why they think they are likely to find evidence of a potential crime there.

The documents remain systematically sealed during the ongoing investigations. But in a recognition of the extraordinary public interest in the investigation, US Magistrate Judge Bruce Reinhart on Thursday ordered the department by Friday to release a redacted version of the affidavit.

In a separate, unsealed document on Friday, Justice Department officials said it was necessary to redact certain information to “protect the security and privacy of a significant number of civilian witnesses, in addition to personnel responsible for law enforcement, as well as to protect the integrity of the ongoing investigation”. investigation.”

The second half of the affidavit is almost entirely redacted, making it impossible to discern the scope of the investigation or where it might be headed. It doesn’t reveal who might be under investigation and doesn’t resolve key questions, such as why top-secret documents were brought to Mar-a-Lago after the president’s term ended, even if classified information requires special storage.

Trump’s Republican allies in Congress were largely silent Friday when the affidavit was released, another sign of the GOP’s reluctance to publicly part ways with the former president, whose hold on the party remains strong during the midterm election season. Both sides have demanded more information about the research, with lawmakers requesting information from the Justice Department and the FBI once Congress returns from summer recess.

Although Trump’s spokesperson called the investigation “all politics,” the affidavit makes it clear that the FBI raid was not the first time federal law enforcement has raised concerns about the records. . The Justice Department’s top counterintelligence official, for example, visited Mar-a-Lago last spring to assess how documents were stored.

The affidavit includes excerpts from a June 8 letter in which a Justice Department official reminded a Trump attorney that Mar-a-Lago does not include a secure location authorized to keep classified records. The official asked that the room in the estate where the documents had been stored be secured and that the boxes that were moved from the White House to Mar-a-Lago “be kept in this room in their current state until further notice. “.

The back-and-forth culminated in the August 8 search during which officers recovered 11 sets of classified documents.

The unsealed document on Friday also offers a preview of the arguments Trump’s legal team is expected to make. It includes a letter from Trump’s attorney, Mr. Evan Corcoran, in which he asserts that a president has “absolute authority” to declassify documents and that “presidential actions involving classified documents are not subject to penals sanctions”.

Mark Zaid, a longtime national security lawyer who has criticized Trump for his handling of classified information, said the letter was “demonstrably flawed” in claiming that Trump could declassify “anything and everything.”

“There are legal and technical defenses as to certain provisions of the Espionage Act if it would apply to the president,” Zaid said. “But some of these provisions make no distinction that would raise a defence.”

Additionally, the affidavit includes a footnote from the FBI agent who wrote it, observing that one of the laws that may have been violated does not even use the term “classified information”, but rather criminalizes the unlawful withholding of national defense information.

Additional reporting by the Associated Press.