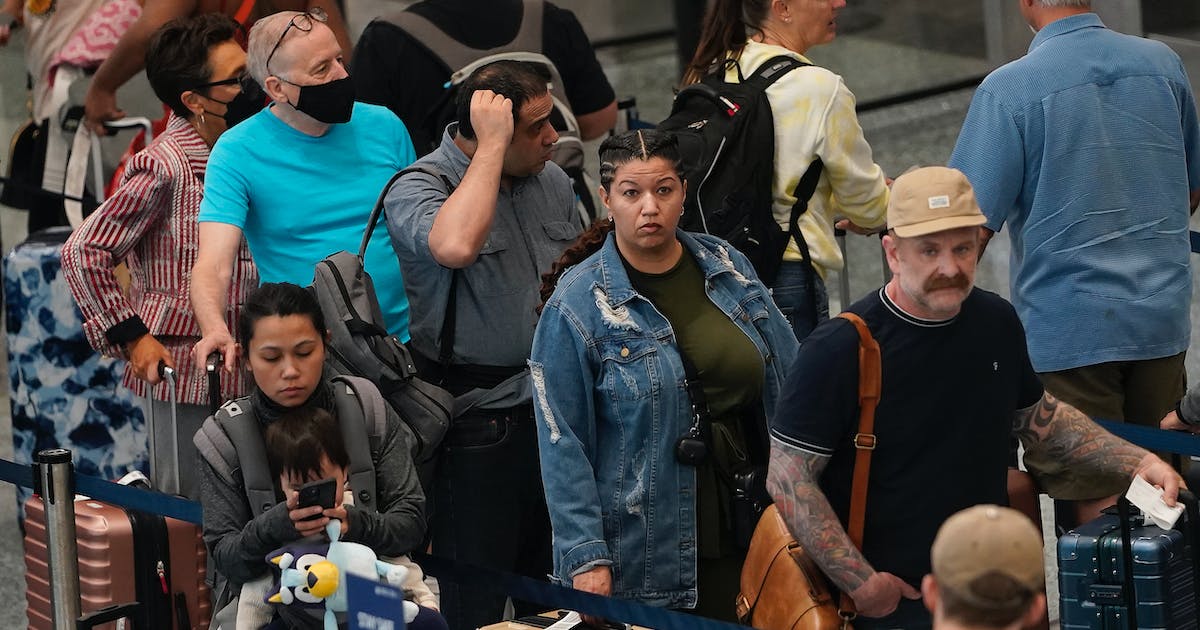 Thousands of pandemic-weary Minnesotans are ready to travel this Independence Day weekend, despite record gas prices, scheduled flight delays and cancellations, and possible damage to airports across the country. .

“There’s just a pent-up demand for travel, where people haven’t been able to travel for the past two years and they can finally go,” said Meredith Mitts, public affairs specialist for AAA Minnesota-Iowa.

Nearly 48 million Americans are expected to take to the skies and highways for July 4, a level close to 2019 before COVID-19 decimated all kinds of travel, according to AAA. But that wanderlust comes with record gas prices and sky-high plane ticket costs.

Kendal Geraets of Lake City, Fla., arrived Wednesday morning in Minneapolis-St. Paul International Airport and on time, no less. She had heard nightmarish stories of flight cancellations and delays over the past few weeks and was worried.

“It was seamless,” she said. “But I prayed very hard for it.”

Prayers aside, AAA says nationwide car travel will set a new record between June 30 and July 4 with some 42 million people hitting the road, despite average gasoline prices hovering around $4.60 in Minnesota, down from $2.69 a gallon last year.

The busiest days at MSP over the holiday long weekend were expected to be Thursday and Friday, according to Metropolitan Airports Commission (MAC) spokesman Jeff Lea.

“We don’t expect a large increase in traveler numbers for July 4, but rather an extended period of busier days,” he said.

Last weekend, Delta Air Lines, the dominant carrier at MSP, canceled more than 600 flights and delayed more than 2,000 across the country, according to the website Frugal traveler.

Delta took the extraordinary step this week to issue a system-wide waiver, allowing passengers to reschedule vacation trips from Friday to Monday at no cost. Delta passengers can now rebook with no fare difference or change fees, as long as travel begins no later than July 8 and the origin and destination remain the same.

Why? “We expect to carry customer volumes over the weekend that are unprecedented since before the pandemic,” the Atlanta-based carrier said in a notice Tuesday.

Delta CEO Ed Bastian expressed remorse Thursday in an email to customers. “If you have experienced any delays and cancellations recently, I apologize,” Bastian wrote.

Gunnar Olson of Thrifty Traveler said Delta’s move was unusual: “Usually you only see free change waivers during storms, like winter storms or thunderstorms. Obviously they’re preparing for a other type of storm.”

Regardless, MSP officials expected around 31,000 passengers to pass through security at the two terminals on Thursday and Friday each. That’s below the pandemic’s record daily peak of 39,000 passengers in March during the busy spring break season, as well as some days in June that hit more than 38,000 passengers, Lea said.

Daily volume at Transportation Security Administration (TSA) checkpoints is expected to stabilize at 22,000 to 24,000 passengers Saturday through the rest of the holiday weekend, Lea said. The projections do not include connecting passengers via MSP, which represent approximately 30% of all flights.

The TSA expects Friday to be the busiest day of the weekend at MSP.

“In general, we’re understaffed,” said Neal Gosman, spokesperson for the American Federation of Government Employees Local 899, which represents TSA agents at MSP. “It wouldn’t hurt if people got [to the airport] early. We don’t know how long the queues will last.”

Olson said if travelers opted for the Delta waiver, it would be best to book the first flight of the day. He warns that Delta’s baggage check lines are often a “pinch point” at MSP’s Terminal 1, with waits often lasting up to an hour. Better to deploy a carry-on, he said.

Sam Hoopingarner, of Austin, Texas, arrived at MSP on time on Wednesday – intending to return home on Saturday. “His this theft that worries me,” he said.

The Minnesota Department of Transportation has urged holiday weekend motorists to plan ahead, expect delays and obey the speed limit, especially when traversing the more than 200 zones of construction work across the state.

At the West Lakeland Rest Area off Interstate 94, just west of the St. Croix River, many motorists stopped to walk their dogs, use the facilities and pick up travel brochures.

“We’re driving because we were a little concerned about the state of the airlines,” said Perry Sylvester, a Michigan resident who was heading to North Dakota. He added that it seemed cheaper to go by car rather than by plane, despite the high gas prices.

Rick Pyles and Laura King drove up from The Villages in Florida to explore Minneapolis for a few months, visiting friends and family along the way. Pyles estimated they had spent over $360 on gas on the trip so far. The highest gasoline prices they found were in Illinois, where a gallon costs nearly $6, he said.

Still, Pyles said they had to drive “because we’ve been here two months. And we’ve already rented this place, so we had no choice.”