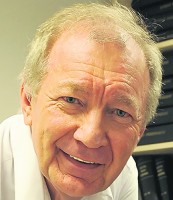 Three rival bidders will battle it out to take over a local newspaper group, their current owner has revealed.

Peter Masters has confirmed to HTFP that he has cut a shortlist after 11 different parties expressed a desire to take over the Cornwall-based ‘Voice’ series before Monday’s deadline.

Mr Masters, pictured, announced his intention to sell the titles last month with a plea for a publisher bigger than his company, Independent Media, to take them over

Speaking to HTFP, Mr Masters said there had been a “fantastic response” to his appeal.

He said: “I know very well who we are going to sleep with, but I am very confident that one of them is the right match.

“I am confident that a sale will take place on or around July 31.”

They are run by nine full-time and three part-time employees, all of whom work remotely.

Mr Masters says he has now shared a business plan with the three shortlisted bidders which proposes a potential expansion of up to 15 titles, and has drafted non-disclosure agreements before undertaking further due diligence on the interested parties.

It has also received separate expressions of interest for two other independent media titles which are currently on hiatus – the historic Sunday Independent, which was first published in 1808, and regional magazine Cornwall Today.

Mr. Masters added: “Everything is positive and we continue to do our part.

“I keep our employees informed as best I can of what is happening.

“We will continue to post in case we don’t sell, but hopefully we can make a sale as I think they will thrive in a bigger organization.”