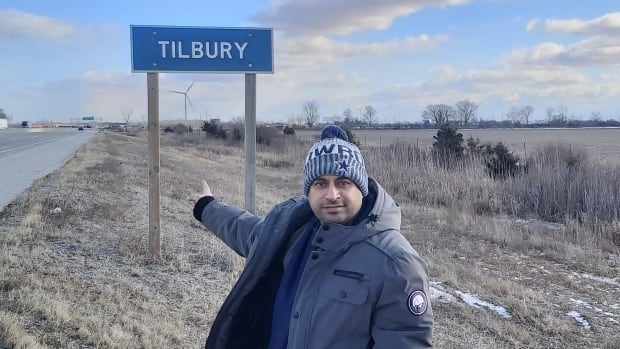 Mohsin Abbas was lounging over the holidays last month, watching television, when he learned that little Tilbury, Ontario had lost its local newspaper and the huge void it had left in the community.

The reporter heard about the shutdown while listening to a CBC radio special about what happens when the local news stops. Postmedia shut down the Tilbury Times and a handful of other community newspapers in Ontario and Manitoba in 2020, citing declining advertising revenue.

But the disappearance of the Times gave Abbas an idea.

Abbas traveled to the town of 4,800 people in southwestern Ontario, between London and Windsor. He knew he had to revive The Times, which ceased circulation after 136 years. Now, less than a month later, he’s the editor.

“I know the importance of local journalism,” he said. “It’s our social responsibility.”

This is nothing new for Abbas. He has already launched his own independent publications and worked in newsrooms large and small — in Ontario, Saskatchewan and British Columbia. Currently, he is a freelance contributor for BBC News reporting in Urdu and Punjabi, and runs another small outlet called the Milton Reporter.

Abbas first worked in Pakistan. He came to Canada as an asylum seeker in the early 2000s, when it was dangerous to be a journalist in his home country.

“Imagine a guy in a prison, sitting in this third world country and waiting to be killed in a confrontation with the police. And then he leaves this place, enters Canada and he is still alive and happy with a beautiful family 20 years later. It’s priceless,” he said.

“What I’m doing is nothing… I thank Canada for saving me.”

The Times’ reboot comes as a shock to locals, who have tried to find creative ways to stay connected since the paper’s shutdown, including local Facebook groups. Some even thought the newspaper’s revival was a joke.

Gerry Harvieux, the newspaper’s former editor, doubted he would ever return.

But Harvieux spoke to Abbas and he supports him.

“He’s very sincere. I think he definitely has a passion for the industry,” he said. “If he can get through the initial start-up phase, I think that will be really good for our community.”

Harvieux hopes to write occasionally for the new outlet and will share contacts with Abbas.

He knows there will be some local skepticism and that Abbas will have to prove himself. He points out how Abbas lives outside of Tilbury, 2.5 hours from Guelph. Abbas said he plans to be in town at least once a week.

“As long as he’s sincere and people can see he’s making a good effort and not just trying to get a quick buck, I think it will be well received.”

Listen to the Tilbury special:

News organizations are dying across Canada. More than 330 local outlets in hundreds of communities have closed since 2008, a death rapidly worsened by COVID-19. Every time a radio or television station, newspaper or online site closes, important untold stories are lost, erasing history, current events and local traditions in small towns across Canada. Join host Haydn Watters in Tilbury, Ontario, where the weekly has closed after 136 years. 51:26

The news appealed to Humphrey Rogers, 87, who has lived in Tilbury since 1946. Although he is hyper-involved in town life, he has no email or social media. So he has struggled to keep in touch since The Times closed.

“It really surprises me,” Rogers said of the revival. “Older guys like me…would think that’s a good thing.”

He took it upon himself to gather feedback for Abbas, speaking to friends on the phone and around town at the post office and at church.

“I don’t want a job outside of this, but I’m trying to see [from] people I know…if the paper comes back to Tilbury once a month, would you be interested?”

The new iteration will be slightly different.

The paper used to be a weekly, but Abbas will mainly publish online. The website is already up and the stories are pouring in. The plan is to release a print version once a month, starting in March, to meet the needs of people like Rogers.

He is looking for freelance writers and wants to rent a small house in Tilbury that journalists can use to write stories.

There’s even a new masthead motto – “for the times we live in”.

Revivals like this are “rare,” said April Lindgren, a Ryerson University journalism professor who tracks Canadian media openings and closings through her Local News Research Project.

“I’m a big fan of that. I hope the community recognizes the commitment and is ready to step up,” she said. “I’m under no illusions that it’s difficult.”

She has seen news outlets start up and fail due to lack of publicity. Right now, Abbas is using his own money to fund the newspaper. He is looking for advertisers in the city and wants the website to remain free for readers.

All of this has Gabby Glasier excited but nervous for her hometown. She helps manage the student newspaper at Western University in London, Ontario, where she is in her fourth year.

She wrote a Tilbury newspaper obituary for the Toronto Star last summer. Now she plans to contribute as a part-time freelancer. Glasier hopes his community will rally behind his return.

“Nobody saw it coming. Nobody expected it. But it’s still there and it’s going to be something good.”