The Recorder – ‘Pears, Monks & Dogs in Boats’ highlights the different directions of the local recorder’s work 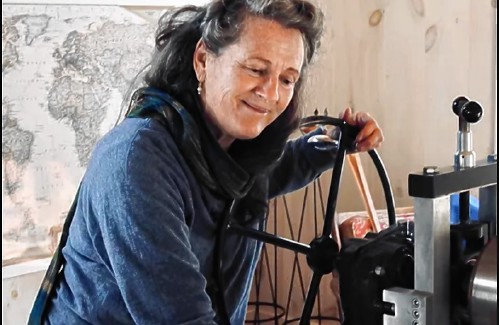 A return to college in her fifties sparked a lasting love for the art of printmaking in local visual artist Lilian R. Jackman, whose work is currently on display in the “Pears, Monks & Dogs in Boats” exhibition. At the Salmon Falls Gallery. at Shelburne Falls.

While he is perhaps best known as the owner of the Wilder Hill Gardens Nursery in Conway, Jackman is also a visual artist. You get this by visiting the gardens, which are filled with colors, textures and lines, made with plants, trees, stone walls, buildings and pathways. The cooler winter months with less activity in the gardens are his time to work in two-dimensional mediums, especially his chosen art form of letterpress and woodcut.

The prints in the exhibition at the Salmon Falls Gallery, 1 Ashfield Street, include three basic directions. The first consists of wood illustrations for his children’s book, “Violeta: One Dog’s Journey”. The second, typographical pieces made up of typographical elements called “dingbats”. The third, woodcuts inspired by her graduate studies at Yale Divinity School and people she met on several trips to Nicaragua.

Jackman returned to school in her fifties and attended Smith College from 2005 to 2009. It was there that she was introduced to printmaking and “the art of the book” under the guidance of Professor Barry Moser. . Jackman printed several limited edition covers and hand-bound books, drawing the text from his studies in Philosophy and Comparative Religion. Jackman said that when they study or discuss religion, people also bring up topics of philosophy and humanity.

“When we think of religion, people think of studying God, but to a certain extent, that studies human nature,” Jackman said. “It’s a search for meaning or for something beyond ourselves. ”

Jackman said she was fortunate enough not to go to school to develop a new career and could focus on her interest in comparative religion. She said she had to take electives and enrolled in printmaking with Moser in her very first semester.

“The typography medium himself, either you hate him or he captures you,” Jackman said. “There is nothing like typography. You place every letter, every space, punctuation, text. You literally manage every letter, pressure and spacing. … It’s an intimate work with the text.

By the time he graduated from Smith, Jackman had worked at the college press with Moser every semester. Jackman says she enjoyed working in “nice shape,” using Smith College’s Vandercook collection of presses. Vandercook & Sons was a proof press manufacturer, founded in 1909 by Robert Vandercook, and was widely used by newspapers and companies in the newspaper industry throughout the 20th century. Vandercook developed the first and most widely used proof presses that did not rely on gravity for the force of their printing.

Moser was kind enough to write a letter of recommendation for Lilian’s graduate studies at Yale University, in which he called her “good company and stubborn.” While at Yale, Jackman focused his studies on apocryphal texts, including Gnostic literature, a tradition of wisdom rooted in Judaism, early Christianity, and Greek philosophy. His studies left little time for printmaking, but provided him with a life of artistic inspiration.

After graduating from Yale in 2012, she said she was “called home,” where she continues to study religious texts and seeks ways to interpret and translate them through her art. She said the content of religious texts can be far-reaching, but sometimes the text can “seem so alive and so immediate.”

“It’s almost a parable of what exactly is going on in our world… because if we really read it, not much has changed,” Jackman said.

One of the pieces in the exhibition “Pears, Monks and Dogs in Boats”, which showcases the mix of his interests in printmaking and religious studies, is “Saint Pachomius and the Angel Eleleth at the Burial of the Nag Hammadi Library “.

“It’s black and white, and it’s an iconographic image in that everything is meaningful in it,” Jackman explained.

The image shows Saint Pachomius standing next to the angel Eleleth from the Gnostic Gospels, with the Monastery of Pachomius in the background to the left. The right side of the room features three ‘creepy’ monks digging up a large clay pot.

This is Jackman’s description of the discovery of the Gnostic gospels. Long buried and suppressed, the Gnostic Gospels contain the secret writings attributed to the disciples of Jesus. In 1945, 52 papyrus texts, including gospels and other secret documents, were found hidden in a terracotta jar buried in the Egyptian desert by two brothers.

When the jar was dug up, said Jackman, one brother feared to open it and free a jinn, spirit or demon, but the other brother wondered if it was filled with gold. The brothers opened it and discovered that it was filled with papyrus manuscripts. It wasn’t until they brought the manuscripts home, and their mother used some of them to start a fire, that it was determined that this was the Nag Hammadi library they had unearthed. .

“Saint Pachomius and the Angel Eleleth at the Nag Hammadi Library Burial,” said Jackman, is an example of the historical and philosophical intrigue she hopes to arouse in others through her works.

After returning from Yale, Jackman apprenticed with Carl Darrow, of Greenleaf Press. Darrow, official printer of Historic Deerfield, generously shared his respect for the printing press and its collection of vintage and metallic type presses. By exploring the typical cases, Jackman fell in love with “dingbats”; the finely detailed decorative borders and embellishments of a printed page, all cast in metal. His engraving extended from text to the creation of images; some examples include: “The Mandala Series”, “The Tree of Life” and “Ivy Escapes Into the Night”.

Jackman bought his own press last year and founded Wilder Hill Press on the grounds of Wilder Hill Gardens. Wilder Hill Press is a printing house with a Charles brand gravure press at the center of the printing house and gallery. The entrance to the gallery is framed by an 18-foot-long three-sided relief mosaic. Comprised of hundreds of hand-cut, glazed and fired porcelain pieces, the mosaic is a glorious entanglement of vivid plant forms, animals and planets illustrating the origin story of Genesis.

The walls of the space feature framed prints from new and old series, while the triptych cabinet rises to the open ceilings, filled with local treasures not found elsewhere.

She said some things are still in the works, but she’s gearing up for a smooth opening this spring, likely around Mother’s Day, when she opens the Wilder Hill Gardens Nursery for its annual opening sale.

Once up and running, Jackman said one-on-one engraving lessons would become available.

Excited by the artistic possibility of text and images together, Jackman spent winters exploring new techniques and styles in countries with traditions of relief engraving. While in Granada, Nicaragua, she studied at La Sirena Taller and learned to carve linoleum and wood, which gave birth to the series Los Trabajadoros de Granada (The Workers of Granada).

While studying with Moser at Smith College, one of his oft-repeated sayings was, “There are only two suitable colors for letterpress printing, black and white … and in some cases red.” One of his Nicaraguan teachers said of relief engraving: “If the image doesn’t work in black and white, then it doesn’t. Inevitably, however, Jackman’s gardener and artist turned to the introduction of color into his prints.

During a trip to Nicaragua in 2013, Jackman met Alicia Zamora, who used her colorful prints to protest oppression and injustice. Alicia, whom Jackman affectionately calls “mi Profesora Iconoclasta”, has a small gallery / workshop in the bakery that she runs with her husband. Fueled by good Nicaraguan coffee and pies from the bakery, Zamora expanded Jackman’s engraving skills to include monotype, layering, and bright colors. Using a variety of techniques and multiple plaques, Jackman explores color in his prints, always defined by the solid frame of a “key block,” the original black and white image.

Winter 2019 found Jackman in Oaxaca, Mexico, working on illustrations for his upcoming book, “Violeta: One Dog’s Journey”. In this bustling city with an incredible history and a press on almost every street corner, Jackman observed “los perros Libres”, the street dogs of Oaxaca, and discovered the Xolos, the mystical dogs of Mexico. Both have become pivotal parts of Violeta’s origin story. The story is inspired by the life of Jackman’s real dog, Viola, from the Dominican Republic.

Under the guidance of Federico Valdez of Cooperativa Graphica in Oaxaca, Lilian adopted the folk style of woodcut and high relief printing that has proven to be perfect for telling the story of the arduous migration of a Mexican street dog to America in the story of Violeta she worked.

The prints seen in this 2021 exhibition are the result of this collaboration.

More information on Jackman’s works can be found at wilderhillpress.com.

The Salmon Falls Gallery at 1 Ashfield Street in Shelburne Falls has “Brick and Mortar Gallery hours of operation” for “Pears, Monks and Dogs in a Boat” from 11 am to 5 pm on Fridays, Saturdays , Sundays and Mondays until April 25. The exhibit can also be viewed virtually in the Salmon Falls Gallery online store at any time. More information can be found at salmonfallsgallery.com.