The Fiji Times » The History of the Government Printing Office 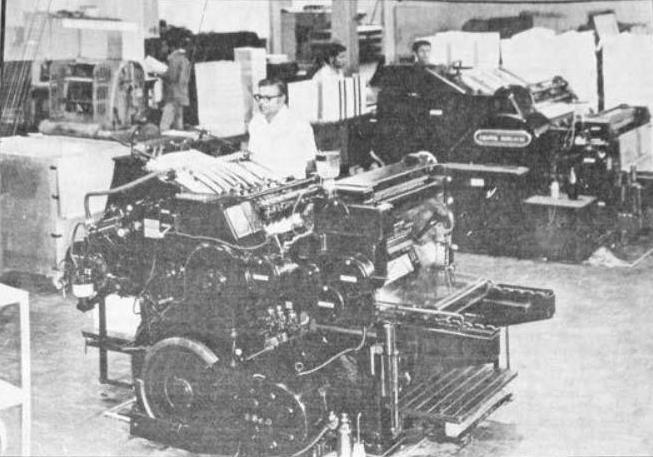 The establishment of a government in Fiji in the second half of the 19th century, at the beginning of colonization, justified the enactment of laws to guide public life and the management of the machinery of government.

Inevitably, this necessitated the establishment of some sort of printing press to publish the laws that were passed and record appointments and decisions.

Under the government of Ratu Seru Cakobau which lasted from 1871 to 1874, a Fijian Government Gazette was first introduced in 1871 and D’Arcy Murray was appointed as the official printer for the administration of Levuka. Then, in October 1878, William Cook was appointed Government Printer to Her Majesty’s Government.

The Letterpress section with a working Heidelberg Flatbed machine. Photo: FT FILE The capital of Fiji officially moved to Suva in 1882.

According to the Fiji Times of July 9, 1978, the first government Department of Printing and Stationery was established in Suva in 1883.

It was on a site where the Defense Club now stands at the intersection of Gordon and Hercules streets.

Mr. Edward March was appointed Government Printer in September of the same year (1883), a post he held until the end of 1912.

Mr. Sebastian Bach succeeded Mr. March in 1913. A strict disciplinarian with a strong personality, his staff remembered him as a tall man with “a beard of fire” and a “temper to match”.

It was during Mr Bach’s tenure as CEO that the Government Printing Office was moved from its original premises in Suva along Gordon Street.

When Mr. Bach retired at the end of 1927, the printing department in Suva had been operating for 44 years with only two people as printers.

In 1915 the premises of the printing press were moved to the corner of Carnarvon and Kimberly streets, at the south-west end of the old government building and to the current site of the National Archives of Fiji.

In 1956, the Government Printing Office staff numbered 69. At the time, the department handled over 3000 printing orders a year, ranging from a ‘modest handful of labels to publications involving several hundred weights or even tons of paper”.

About one million forms, receipts and other items were printed monthly and about 70,000 covered books, 20,000 pads and over 100,000 gazettes, pamphlets, reports and booklets were cleared by the department during the year, consuming more than a ton of paper every week. .

In addition to the press, all the legislation of the territories of the High Commission for the Western Pacific, which included the British Solomon Islands, the Protectorate and Colony of the Gilbert and Ellice Islands – and supplies, the bulk of their other requirements of printing were done in Suva.

Work has also been undertaken for the ‘Condominium of New Hebrides’ (Vanuatu) and the Kingdom of Tonga.

Even the tiny island of Pitcairn had its modest printing orders fulfilled by the humble department of Suva.

The Fijian military forces and most of the colony’s statutory bodies also relied on the government press.

Apart from the various printing works, the department has also been used to produce a number of regular publications including the Royal Fiji Gazette (published weekly) as well as legal supplements, bills and ordinances, the Gazette from the High Commission for the Western Pacific, the Agricultural Journal, the Education External Gazette, the Fijian School Journal, Fiji Information and Na Mata – the 16-page monthly vernacular Fijian newspaper.

Each month, a statistical summary of the colony’s trade was published on behalf of the Customs Service.

Departmental annual reports and any other special reports were issued as Council papers as they were received during the year, and full records of Legislative Council meetings were printed in copies of Hansard. These are the main regular articles published.

In 1956, the Legislative Council elections and the census had resulted in a great deal of additional work. The new telephone directory and a 52-page consolidation of Fiji Information were also printed in 1956.

Two substantial publications, both illustrated, have been produced on behalf of the Department of Agriculture – ‘The Grasses of Fiji’ and ‘Soil Erosion and its Control’. In 1956 two books Force Standing Order for Police and Fijian Grammar by Mrs GBMilner – were ready for the press.

Although the department was essentially a service department – where goods were supplied free of charge to most government departments – income from other official bodies, as well as the sale of publications in Fiji and abroad, brought in over 10 000 livres a year to the revenue of the colony.

. Publishing activities increased during 1955 and 1956 and covered a wide range of topics.

Books produced at the printing press were sold by booksellers throughout the colony, and a growing foreign clientele was served by mail order.

The bestseller of those years, as far as purchases abroad were concerned, was Mr. RADerrick’s “The Fiji Islands”, a geographical textbook which had enjoyed steady sales since its first printing in 1950.

Copies of the book have been purchased by libraries and universities around the world and by book agents in many foreign and English-speaking countries. Banknotes, postage stamps and bond certificates were among the documents ever printed by the government printer.

However, there was an exception. During the war years, when the colony’s silver coins and pennies were either donated by Allied troops or used in some other more profitable way, local paper money was printed in denominations of 1ds, 1s and 2s, to deal with the emergency.

“At one time during the war, with a severe shortage of metal, the government printer printed a quantity of one shilling notes and two denominations of a shilling and Fiji penny notes were printed in Australia” , says the Reserve Bank of Fiji website.

“In 1942, when some normal banknotes became scarce, the Reserve Bank of New Zealand agreed that the New Zealand £1 and £5 banknotes, printed by the Commonwealth Bank of Australia, be overprinted for local use by the government printer.

On the office side, a small clerical staff handled routine bookkeeping duties, sales to the public, and supplying all stationery to government offices. The typesetting section took care of the meticulous typesetting, proofreading and preparing the type for printing.

Local staff worked under the supervision of their respective foremen. Despite the modern machinery of the 1950s, much of the success of printing efforts depended on the human factor.

The construction of the new building was first launched by R.LGribble in 1968, then government printer, but it was not until 1974 that Mr. Sanerive received “the green light to build”.

The $900,000 facility, which took more than three years to build, also included a printing school run by the National Training Council to “keep up with the technical explosion” that was then hitting the printing industry. the printing press.

The school trained printers to do commercial and government work.

“The new services the press will provide will include book printing for the Department of Education and color and map printing.

In January 2019, Government Printing Services was privatized when Fijian Holdings Limited took full ownership of the business. The government says this was in line with the governments objective of encouraging private sector participation in the cession space.