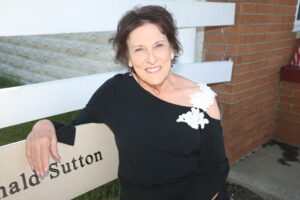 By David Fleet
Editor
Ortonville — After nearly 1,400 editions, a local newspaper icon whose diligence, foresight and friendliness has driven a weekly publication for 27 years to the pinnacle of success will retire on July 1.
Advertising manager Jackie Nowicki, who along with then-editor Jim Sherman of Oxford-based Sherman Publications launched The Citizen newspaper with a plan in the summer of 1994.
“When we started nearly 27 years ago, our goal was to be ‘the community newspaper’ for the Ortonville and Goodrich area,” Nowicki said. “Business owners were asking for a product that would be read cover to cover with local faces, milestones and community news including churches, schools and service organizations, all events and happenings locals who make the newspaper the ideal platform for their ads to read.
On August 25, 1995, the first edition of The Citizen arrived in mailboxes.
“We had to assure our readers and advertisers that each week the local connection to the community was strong,” she said. “Everyone has a story to tell and our goal has been to reflect that on our pages.”
Sherman said the community continues to benefit from Newicki’s vision for The Citizen.
“Ortonville and Goodrich owe Jackie for bringing The Citizen Newspaper to town,” Sherman said. “Jackie and I walked into every business in town and asked for their advertising budget.”
He figured the company needed $250,000 to start the newspaper in 1995, he said.
“Jackie made it possible,” Sherman recalls. “The next thing I knew was that Jackie sold the Bueche family. A grocery ad in a newspaper is a big deal because the supermarkets abandoned the premises when they got too big to be local.
“Jackie knows what local support for news is and has been selling that value every day for 28 years. Because of the success Jackie brought to The Citizen, she helped hire several great editors and writers, but none were better than the current team of David Fleet, Shelby Stewart-Soldan and Patrick McAbee. Year after year, The Citizen is one of the Michigan Press Association’s top three newspapers. Everyone should thank Jackie Nowicki.
Over the years the area has grown and businesses continue to thrive thanks to Nowicki’s work.
On April 1, 2022, The Citizen along with the other Sherman Newspaper Group publications were purchased by the View Newspaper Group.
Rick Burrough, is the president and owner of View Newspaper Group.
“To say she will be missed in our business is an understatement,” Burrough said. “She has set the bar very high for The Citizen, and we will strive to follow her example. We wish Jackie the best in a well deserved retirement.
Wes Smith, View Newspaper Group, publisher worked with Nowicki for several years to print The Citizen.
“Jackie has been an exemplary leader for The Citizen and the community of Ortonville for nearly three decades,” Smith said. “Equally importantly, she has been an advisor, mentor and friend to The Citizen team and to many of her clients and colleagues over the years. I am proud to be one of those colleagues with whom I had the pleasure of working and learning from Jackie.
In retirement, Nowicki plans to have no deadlines and spend time with his family.
“We accomplished what we set out to do,” she said. “Along the way, we have made many relationships. Thank you all for buying local and supporting The Citizen. I love this community and I will miss the relationships with advertisers, they are friends and not just clients. »
Come and wish him a happy retirement before June 30, 12 South Street, Ortonville.