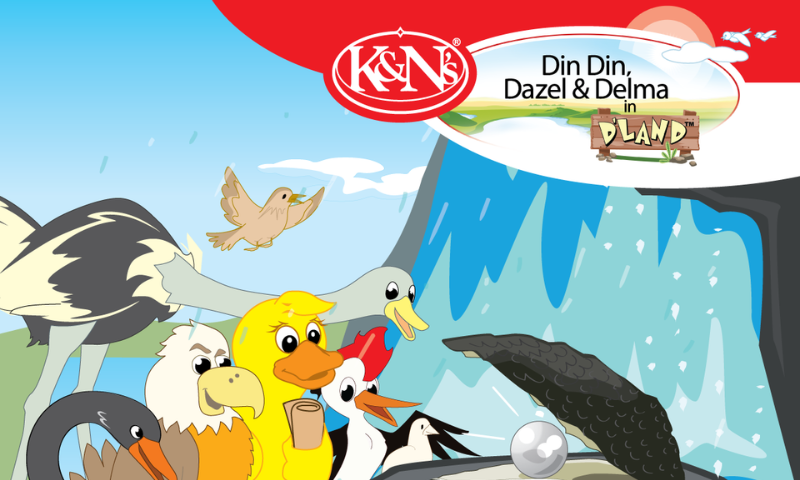 Let’s find out what Dazel is up to this week.

Dazel the duck was awake before the sun even rose. It would soon be dawn on the second day of their summer trip and Dazel was very upset.

It all started so well. She had been so excited to take this camping trip to the beach with her classmates and she had been even more thrilled to be chosen as the group leader. But once they reached the beach where they were supposed to camp, everything started to go wrong.

Her group had fallen second in the first day’s two trials and Candy the Canary’s team had won. Dazel also had in his team Eva the sour-tempered eagle who was very difficult to deal with.

Today was the second and last day of their camping trip.

Dazel looked at the two groups – the birds were still sleeping. Dazel knew they would be up by the first rays of the sun.

“I need to wake up my team members before Candy’s group, so we’ll be fresh to take on today’s first task,” Dazel said.

She gently nudged Swain and Oti. They woke up immediately and started waking Rita the robin, Teak the woodpecker, Davy the dove and Pie the pigeon. When Dazel tried to wake Eva, the eagle let out a wild cry.

“What is it now,” growled the eagle. “It’s not even morning yet!” “It’s nearly dawn,” Dazel whispered. “Refresh so we can have breakfast and be ready for our first task.”

After a series of sniffles, Eva woke up but her loud moans also woke up Candy’s team.

Dazel’s efforts to give his team a head start were in vain as now both teams were in place.

At sunrise, Wiz Rooster announced that each team’s task for the day was a scavenger hunt. Each team received a card. The team that followed the map and arrived at the treasure first would win.

Dazel and his team huddled around the map.

“The treasure area is marked with an ‘X’,” Dazel said. “The ‘X’ seems to be very far from the beach near a set of hills,” she discussed with her group.

“Come on, we’ve seen the map. Now let’s start finding the treasure,” barked Eva the eagle in her irritated voice.

“No Eva. The first thing to do is fly over this area and find the hills that are marked on the map,” Dazel said firmly.

Dazel’s group flew over the beach. They could see a border of hills on the north side of the beach. Dazel motioned for his team to fly over there. When they landed at the foot of the hills, Eva complained, “There are so many hills. It will take us centuries to find the treasure.

“Please calm down, Eva,” Dazel said. “I know those hills.” “Really?” Swain exclaimed. “Yes, Swain! I’ve been here before. You all know I love exploring D’Land and this is a part of D’Land I’ve been to before. The area marked with an ‘X’ is near the hills, but also near a waterfall. . This is the waterfall where I picnicked with my best friends Din Din and Delma,” Dazel replied. “Come on, follow me.”

“It’s here!” Oti shouted, craning his long neck toward a shelf behind the waterfall. “There’s an ‘X’ drawn here.”

All of the birds on Dazel’s team flew and hovered near the waterfall, getting drenched in the spray from the falling water.

A pearl lay in an oyster on the shelf where the “X” was written. Eva the eagle tried to catch the pearl in her curved beak.

“Be careful,” warned Teak the woodpecker, “Make sure you don’t scratch it!”

“Let Dazel hold it,” Swain said. “Her beak is smoother and she is the team leader. It is his expertise in the field that brought us here.

Reluctantly, Eva let Dazel hold the shining bead and the team flew to the campsite.

Wiz Rooster was waiting. “Dazel’s team found the treasure I see. Congratulations! I didn’t expect a team to find the pearl so quickly,” the rooster said.

“It was Dazel’s familiarity with the area that helped us locate the treasure so quickly,” Swain said loyally. Dazel blushed with pride. “No, no,” Dazel added, “It was teamwork!” His teammates cheered.

“The main task of the day was won by Dazel and his team,” said Wiz Rooster. “Now for the final task – each team must prepare a meal with as many ingredients as you found yesterday. You will be judged on the uniqueness and taste of your meal. The goal is to work in harmony,” explained WizRooster.

Each team quickly prepared a bonfire. Dazel planned to make plum jam on banana leaves with a salad of sunflower seeds and coconut water fortified with lemon and lime.

“Does everyone agree with this menu?” Dazel asked looking at his team members with anticipation. She desperately wanted to be a good leader that everyone respected.

“Simple is good,” said Rita the Robin. “We will work hard to make these simple dishes tasty and presentable. If we try anything too fancy, it might not work well.”

The rest of the team members nodded in agreement and they set about preparing the meal in the allotted time. Eva grumbled as she worked but the other birds ignored her and got busy helping each other with their task.

Soon the meal was being prepared by both teams and served to Wiz Rooster who was to judge them.

Candy’s team had prepared a tower of fruit as a salad, a stew of dates and coconut water.

“Their food looks much better,” Eva hissed to her teammates.

Teak the woodpecker glared at Eva angrily but before a fight broke out, Dazel said hurriedly, “Look, Wiz Rooster is tasting the dishes.”

Both teams watched in silence as Wiz Rooster examined the dishes and tasted them. Finally, he looked up and said, “Both teams did a great job. But there has to be a winner and I believe Dazel and his team have cooked up a tastier dish.

Dazel and her teammates were jumping for joy.

In the evening, when it was time to finish their camps and return home, Wiz Rooster summoned the two teams.

As the two groups congratulated each other, Eva the eagle approached Dazel.

“You turned out to be a good leader after all,” Eva added reluctantly.

As Eva flew off, Swain approached Dazel and said, “Oh my God! Dazel, you’ve earned sour-tempered Eva’s approval! This is your real victory!” And the two birds were laughing together.