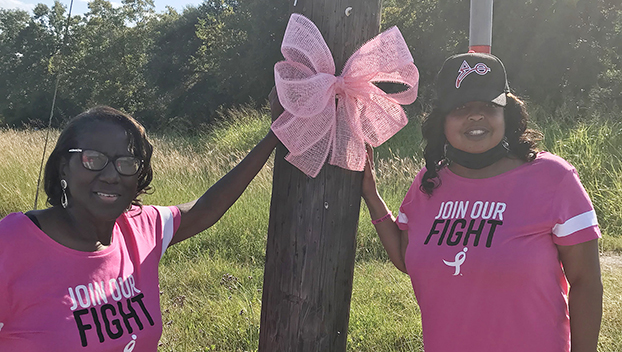 Take a ride in Orange along Park Street, starting at 10th Street and continuing to Simmons Drive, or go from 10th Street to Cordrey Avenue.

One thing that will surely catch your eye are the many pink arches attached to the power poles.

This is part of the Pink Street Project, led by the Physical and Mental Health Committee of the Orange Texas Alumnae Chapter of Delta Sigma Theta Sorority Inc.

She has been with the sorority for about 25 years and is drawn to giving back because the organization is made up of college-educated women who are committed to public service with a focus on the African-American community. .

The Orange native said her four-person committee met and decided to focus on this particular program because it is so important.

“There is a large percentage of African Americans who have breast cancer, and many of these women have difficulty accessing the health care they need,” Goodwin said. “We wanted to raise awareness about the disease and talk about getting tested for breast cancer.”

The issue is particularly personal for Goodwin, as his mother battles breast cancer.

“It’s near and dear to my heart,” she said. “Women just need to be tested every year. During the pandemic, many people have chosen not to visit their doctor’s offices, but it is important that we move forward and get tested every year. This can be done easily through a series of tests, which is why we decided to focus on that.

After skin cancer, breast cancer is the second most commonly diagnosed cancer in American women, affecting one in eight women who live to age 80, according to Cancer Treatment Centers of America.

An estimated 287,850 new cases of breast cancer will be diagnosed in American women in 2022, according to the American Cancer Society. Breast cancer accounts for 15% of all new cancer diagnoses and 7% of all cancer deaths each year.

“We did (the Pink Street project) for the first time last year and got such positive vibes from the community,” Goodwin said. “There were many, many responses for seeing those pink ribbons along Park Street. Even as we put up the ribbons this year, people were waiting and letting us know they liked what they saw.

The committee’s goals are to remind neighbors of the importance of breast health while emphasizing that men can have them too.

Goodwin has partnered with Julie Rogers’ Gift of Life program to raise awareness of breast cancer in Orange and surrounding communities.

In addition to the brochures, Gift of Life provided pink wristbands which were provided to churches.

Stephen Hemelt is the publisher of Orange Newsmedia, which produces Orange Leader and orangeleader.com. He can be reached at [email protected].