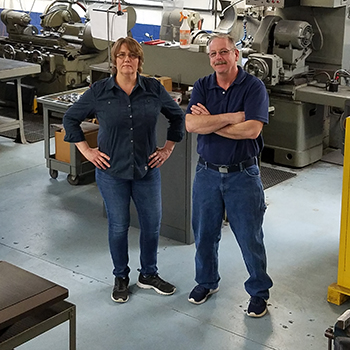 Master toolmaker Cathy Sitek was set to retire from her job as a machinist in 2015 due to pain in her body from standing all day in front of a machine for years. Then she had an idea that has the potential to help millions of peopleF workers.

“I was getting sick with MSDs (musculoskeletal disorders) caused by incorrect posture, when you lock your hips and knees,” says Sitek. “I tried standing with my shins against a shower stool, and that’s when I had my ‘aha’ moment.”

According to the Centers for Disease Control and Prevention, MSDs are injuries or disorders oF muscles, nerves, tendons, joints, cartilage and vertebral discs. When it comes to work-related MSDs, the work environment and the performance of multiple tasks are factors that contribute significantly to the condition.

After her experience with the shower stool, Sitek and her husband, Jerry, designed a sturdier version oF the product and named it StandRite-Pro. They filed for a provisional patent in November 2015, followed by a utility patent application in 2016. The pair completed validation and prototyping in 2018 and were awarded a utility patent the following year.

The result is a metal base with a padded foot mat and a straight cushion that people can lean their shins against while working.

“We’re creating an engaged forward position, the way athletes use it,” says Jerry Sitek. “We bend the knees to unlock the hips, reducing the force that builds up in the lower back.”

Seven variations oF the product, which is built in Holland with components from Minnesota and Texas, sells for between $295 and $495. With approximately 90 million Americans working all day, the market for the StandRite-Pro could be huge.

There are currently approximately 140 StandRite-Pros in use, and approximately halF were provided by Siteks for testing purposes. The other halfF have been purchased.

Linamar Gear, a global automotive supplier in Guelph, Ontario, Canada, is one company that has completed a trial and plans to provide the StandRite-Pro to all oF its permanent workforce. Eden Valley Poultry in Nova Scotia tested the product for a year, gained Canadian government approval and now equips its team with StandRite-Pros.

Eden Valley Safety and Wellness Officer Ryan Moffatt reports that an oF its employees using StandRite-Pro are reduced to one Tylenol a day. This was welcome but unsurprising news for Sitek. “It actually heals your body by strengthening your muscles,” she says. “Now I am healthier than I have ever been.”

With overuse injuries costing employers $13.4 billion every year, according to Liberty Mutual, purchasing a low-tech device like the StandRite-Pro could be a worthwhile investment for businesses oF all sizes.