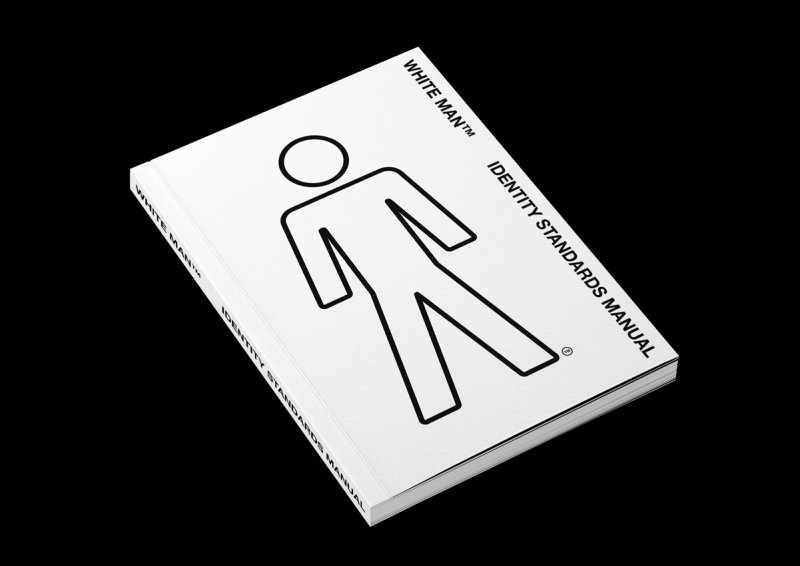 As design geeks, we all love a style guide, as evidenced by the success of publishing company Kickstarted’s Handbook of Standards. So award-winning Leeds design studio Split took that popularity and gave it a satirical twist.

Assuming that the form of corporate brand guidelines, the manual of White Man ™ identity standards is published this month, offering a satirical exploration of the relationship between identity and white and male power. Written and designed by Split founder Oli Bentley, it follows his award-winning These Northern Types, a typographic exploration of Nordic identity.

By combining the worst excesses of corporate BS with beautiful utility graphics, the manual of White Man ™ identity standards explores how deep the links and identity can be deep.

Interestingly, Oli sees the book as a satire not just of white male dominance in society, but even of the idea of ​​style that guides them.

“We all love a good set of brand guidelines,” says Oli Bentley. “But a corporate brand manual is often designed to do two things: first make sure compliance, then, thanks to this homogeneity, make sure that the identity and heritage of a brand are exploited to gain – or maintain – as much market share as possible.”

With this notion in mind, the book “seemed a good starting point to explore the depths of connections between identity and power for a media design / warning audience – and to explore my own identity and my privilege” , he continues. “The format presents whiteness and masculinity to actively consider as identities, and not as the invisible” defect “against which so many people are currently opposite.

“I also hope it will recur to the overly practical little myths used as stand-ins for the nuanced nature of true identity; that we could all live a little more honestly and also outside of such 2D, black and white constraints . “

The book was described by designer Mat Lazenby of the York Lazenby Brown agency as: “An incredibly well articulated point, made in a smart and tragically funny way. The more the truth is discovered.”

The book will be launched during a free event in Leeds later this month, but is already available in the online store of Split, as well as other products such as the giant typographic prints of Anthony Burrill, Oli Bentley and Thomas Mayo, and a limited series of T-shirts. , tote bags and badges featuring the fictitious TheNorth™ brand.