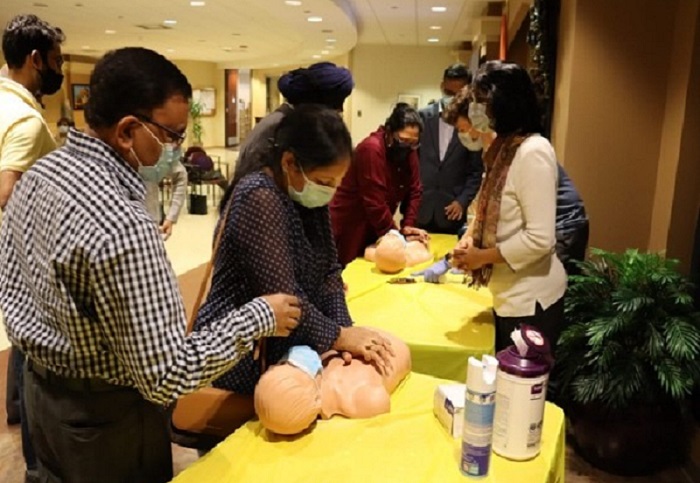 While heart disease is the number one global public health problem, South Asians are four times more likely to develop heart disease than their Western counterparts, according to an Indo-American heart specialist.

Heart attacks strike South Asian men and women at a younger age, and they are more likely to have a heart attack before age 50, says Dr. Vemuri S Murthy, Chairman of the Chicago Board of Directors Medical Society.

As a result, morbidity and mortality are higher among them compared to any other ethnic group, and they tend to develop heart disease ten years earlier than other groups, he said in a presentation. at the Indian Consulate in Chicago on December 15.

The presentation on “Global Heart Disease, Heart Attacks and Sudden Cardiac Arrests,” with a special focus on Indians and the Indian Diaspora in the United States, was part of the Heart Health Awareness Program at the Consulate.

He spoke about the programs needed to improve survival and outcomes during heart emergencies via. community awareness, prevention, early detection and timely intervention.

Inaugurating the program, Consul General Amit Kumar spoke about the importance of Indo-American health partnerships in reducing morbidity and mortality from heart disease and the major role of the Indian diaspora in strengthening these affiliations through projects. innovations developed jointly.

As an example, he cited the recently successfully implemented Heart Rescue India (HRI) project with an Indo-American collaboration, involving the University of Illinois College of Medicine and UI Health, Chicago, and Ramaiah Medical College in Bengaluru with a grant from Medtronic. .

Danny K. Davis, a member of the United States House from Illinois praised the important role of American Indian physicians in contributing to the general health and well-being of American communities.

In a virtual message, Indian US Congressman Raja Krishnamoorthi congratulated the Indian Consulate and Dr Murthy for organizing the program and their efforts to improve outcomes after cardiac arrests among communities.

Amit Kumar, Davis, Dr Bharat Barai and Dr Murthy published the CPR information brochure for community witnesses in three languages ​​- English, Gujarati and Spanish for the Indian and American communities. Brochures in other Indian languages ​​will be available soon.