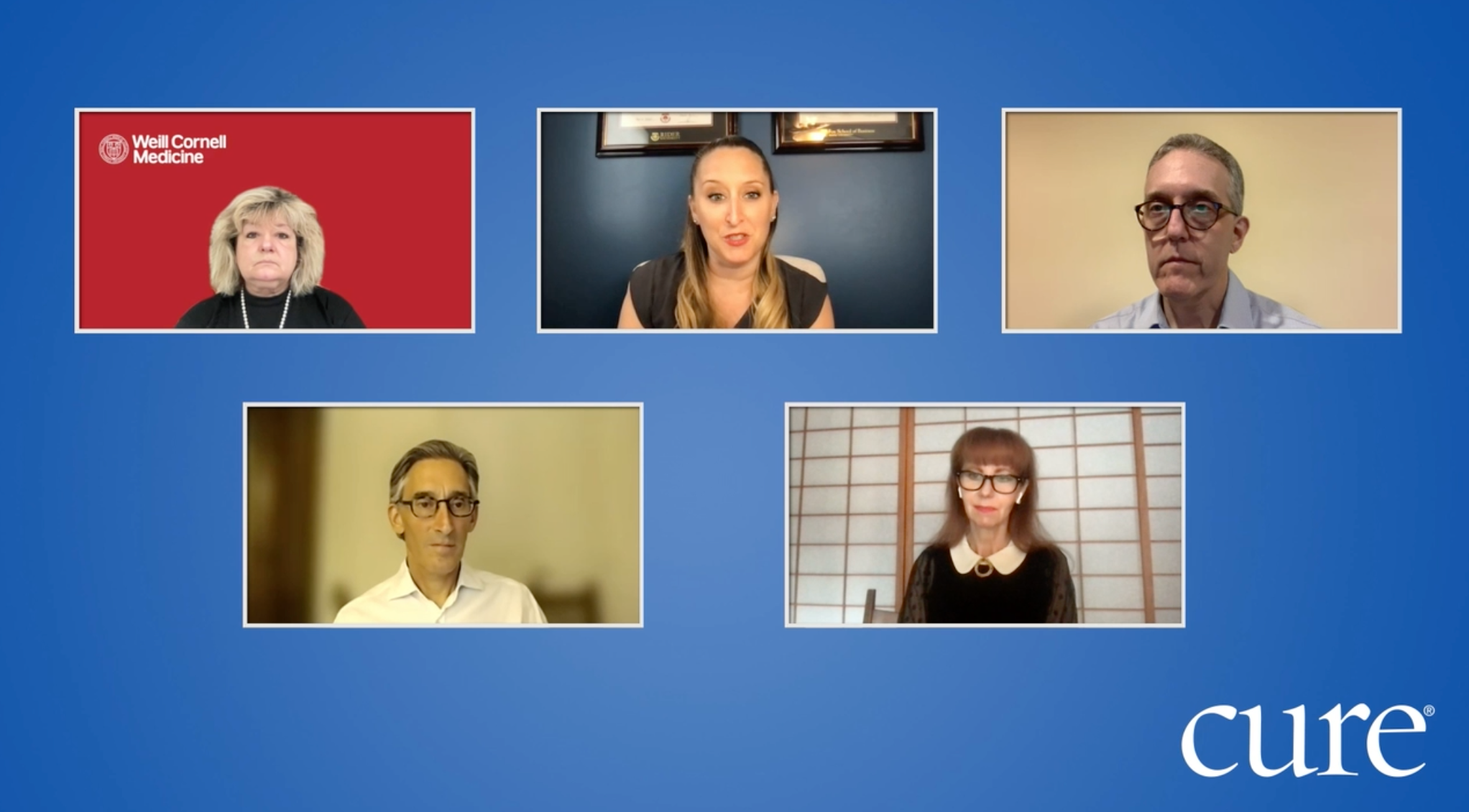 Kahl: So Julie, I really wanted to start with you. Could you tell us a bit about your journey with skin cancer and your family history?

Bath : Yes, I am in a way the poster child for risk. Not only because of the red hair, fair skin, freckles, but also my sun exposure back when we didn’t have all the knowledge and products that we have now. So I’m also the star child of early detection, because when I was 25, that was a long time ago, I had a little sore on my thigh that just wasn’t healing, and it was getting crusty and sometimes bled. And so I kind of pushed hard with my brother-in-law, who was an otolaryngologist and said, ‘I think that’s something, it could just be skin cancer.’ And he’s like, “Oh, you’re too young.” But he did a biopsy for me. And it was basal cell carcinoma, and it was the first in a long line.

So I, I was vigilant and I ended up quitting, you know, thinking maybe if I got a little tougher, I’d tan and be sexy and beautiful, like Farrah Fawcett or whatever. And I stopped doing that, but a lot of damage was done. And so I believe my current count is 11 basal cell carcinomas and two squamous cell carcinomas, which are not nothing, they’re a little scarier, and there are several on my scalp. Several things that were aggressive and reoccurred. So I had a lot of Mohs surgeries, but luckily they were all taken where I didn’t, you know, nothing had reached the level of a lot of what we talked about earlier.

Kahl: Great. Thanks for sharing this. And Dr. Cohen, we had a question about what is good fiber versus bad fiber? Or do all the fibers look like fiber bars? Are they all good?

Cohen: Well, you just added a fiber bar option. So the best fiber actually comes from whole foods. So, you know, things like cereal, a great fiber is rolled oats or what you get from barley and millet, those whole grains. There is also plenty of fiber in protein lagoons, soybeans and lentils and other types of legumes. Good fiber comes from plant-based foods. And you can actually, you know, it’s very easy to find on the Internet, you know, the fiber content of different foods, Jerusalem artichokes, which are kind of rare but now more popular, an incredible source of fiber. And the kind of tracking is important because the healthy bacteria that we know are linked to better health and especially the response to immunotherapy grow and multiply with those healthy fibers. And the reverse is also true, however, that a diet high in sugar, a diet high in processed foods, a diet high in red meat, will actually help unhealthy bacteria thrive in the body. And again, the key is back to diversity. And it focuses primarily on plant-based foods.

Kahl: Great, thank you. And Dr. Wolchok, we had a question. Would a person who had a very aggressive T cell cancer still have a good reaction to immunotherapy?

Wolchok: This is a very important question. I think it depends a bit on the previous therapy the person received and whether they suffered an immune deficiency as a result of their previous treatment. But we have certainly seen people who have been treated for blood cancers who may still have excellent responses to immunotherapy for skin cancer.

Kahl: Great. Thanks, and Dr. Pavlick. So you talked a lot about all the good things and why we should be looking at clinical trials. But we often hear patients talk about misperceptions about a trial, like if I’m getting a placebo, that means I’m not getting a treatment. So can you dispel some of those myths we often hear about participating in a clinical trial?

Pavlick: Sure. I think when it comes to placebo-based trials, people need to understand that these placebo-based trials are done when the standard of care is to do nothing and just watch the patients. So if we do a trial, for example, with immunotherapy versus observation, those trials are done in early-stage melanomas where we wouldn’t routinely give patients treatment. And so that’s the accepted standard. If you should have advanced disease or metastatic disease, we are not treating these patients in placebo controlled trials, we can offer them a phase 3 study status, which means we offer them a randomized trial, so I don’t choose and the patient doesn’t choose the treatment they receive. But they will either get research therapy or they will get what is considered the current standard of care. So they will receive a kind of active therapy. So it’s always a good question to ask when you go into a trial and say, you know, is there a placebo arm and 99% of the time the answer is no. But again, for early-stage trials, as we move immunotherapy further and further into earlier stages, there may be a placebo because that’s what’s considered a standard.

Wolchok: Kristie, if I could just expand on Dr. Pavlick’s excellent answer. I think the use of immunotherapy in the early stages of disease is a very current topic of discussion among many of us because, of course, we all strongly believe that if there is a treatment that can help to long-term survival of, you know, melanoma at an even earlier stage than we should think, but, you know, an open question is still whether the side effects of this treatment are outweighed by a significant benefit in terms of overall survival. And that’s why I think observation alone is always, you know, a fair comparison. And even now that people have the ability to benefit from immunotherapy and early-stage disease, it’s still not clear whether these drugs we have available work better in early-stage disease versus advanced disease. I think what a lot of us are hoping for is that we have better tools to predict recurrence so that we’re not treating people who have already been cured by surgery, with drugs that have the possibility of causing real damage.

Kahl: Absolutely. And Dr. Wolchok, or maybe even Dr. Pavlick, is there any word on the drug dostarlimab in relation to melanoma, specifically stage 4 disease?

Wolchok: Dostarlimab is part of this class of anti-PD-1 drugs. It’s not clear to me if it’s different from (Keytruda [pembrolizumab]) or (Opdivo [ipilimumab]) which are both approved to treat melanoma or (Libtayo [cemiplimab]), which is approved to treat squamous cell cancer. I think it got a lot of appropriate media attention because of a small study in people with rectal cancer, resulting from an inherited deficiency in the ability to correct random genetic damage, where all the patients, who were 12, had complete responses, which is wonderful, but it is not clear that this result would have been any different with another member of the same drug class, to which people with cancer of advanced skin already have access.

Kahl: OK! Great. And we just have time for one more question. Julie, I was wondering if you could share with us the resources available at the Skin Cancer Foundation so that our patients may be able to look after today’s summit?

Bath : You bet. Yes, we call ourselves a small but mighty foundation. We are less than 20 people, but we serve millions of people on our website, skincancer.org and through our public education materials, brochures, magazines, blog, events and, you know, campaigns. . So everything is available there. And I just want to say that we also give research grants, and it’s an honor to be on this panel with Dr. Wolchok, who we gave a grant to in 2011. For him to investigate. Ipilimumab with I think it was a BRAF inhibitor. And he was such a pioneer in this field and made such a difference. And so every year we also award research grants. And we focus on all skin cancers. So yes, it’s a great honor to be with our excellent presenters and topics today, it’s my job to absorb information like this and then translate it as a longtime former journalist . That’s, that’s what I do.

This transcript has been edited for clarity.

For more information on cancer updates, research and education, be sure to subscribe to CURE® newsletters here.