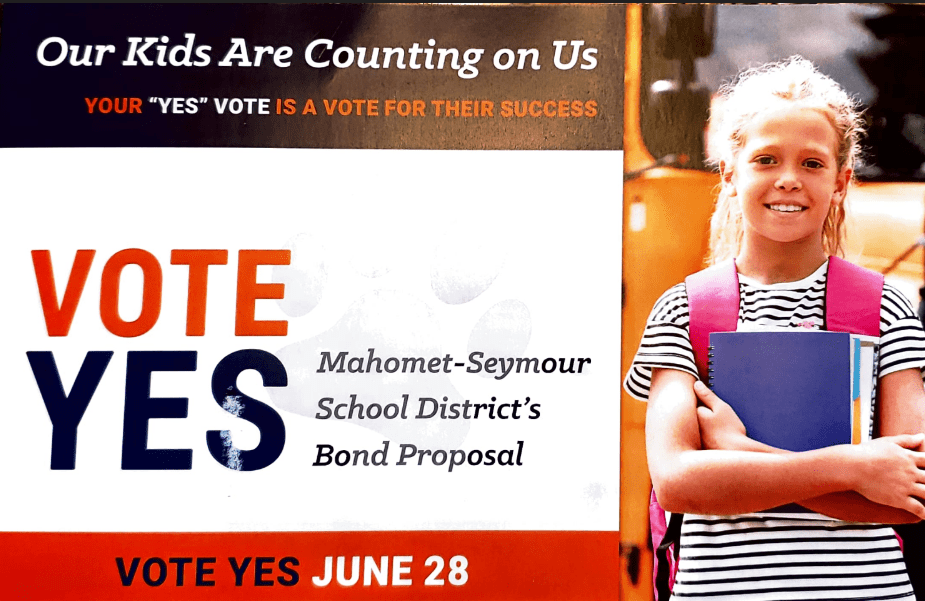 Second Quarter Political Action Committee (PAC) Reports from the Illinois State Board of Elections show the donations and spending behind the work Citizens for Bulldog Blueprint did in support of the 2022 Mahomet-Seymour School District Referendum.

The committee reported spending $1,320.00 on signage with Awesome Campaigns, Inc., $2,985.30 on brochures with Creative Entourage, and $3,000.00 on computer software with DecisionBricks, Inc.

Citizens for Bulldog Blueprint sent out five letters to voters and hung door hangers for residents who weren’t home when they went door to door. They also had a website, yesforbulldogs.com. It’s unclear if they ran any ads at that time.

Mahomet-Seymour School Board Chairman Max McComb, who was not part of the PAC according to the records, spent less than $200 to raise positions associated with the referendum from the Max McComb account, MS Board of Education, according to the Facebook Ads Library.

Mahomet Daily will continue to follow third quarter reports from the Citizens for Bulldog Blueprint PAC to provide this information to readers. The declaration of shipping costs, for example, has not been taken into account in this report.

Broeren Russo Builders has built both phases of Middletown Prairie Elementary and renovated the Mahomet-Seymour Library and Auditorium over the past decade. Davis Electric and Davis-Houk Mechanical have worked with the school district since 2019, at a minimum per board packages. During this period, Davis Electric received $78,191 for services and Davis-Houk received $1,211,350.38, primarily for district-wide HVAC and plumbing work.

Harold O’Shea Builders, Inc. has worked with Mahomet-Seymour’s architect of record, BLDD Architects, on several projects including the John Hill Magnet School and Maroa-Forsyth renovations and additions, among others.

Creative Entourage was also hired by the Mahomet-Seymour School District to work on the Bulldog Blueprint, which resulted in the $97.9 million issue. The referendum failed with a vote of 3,511 to 1,714. BLDD was paid $20,000 for this work and would have received an additional $40,000 had the referendum passed.

The Mahomet-Seymour School Board will again address the Bulldog Blueprint discussion at tonight’s board meeting.