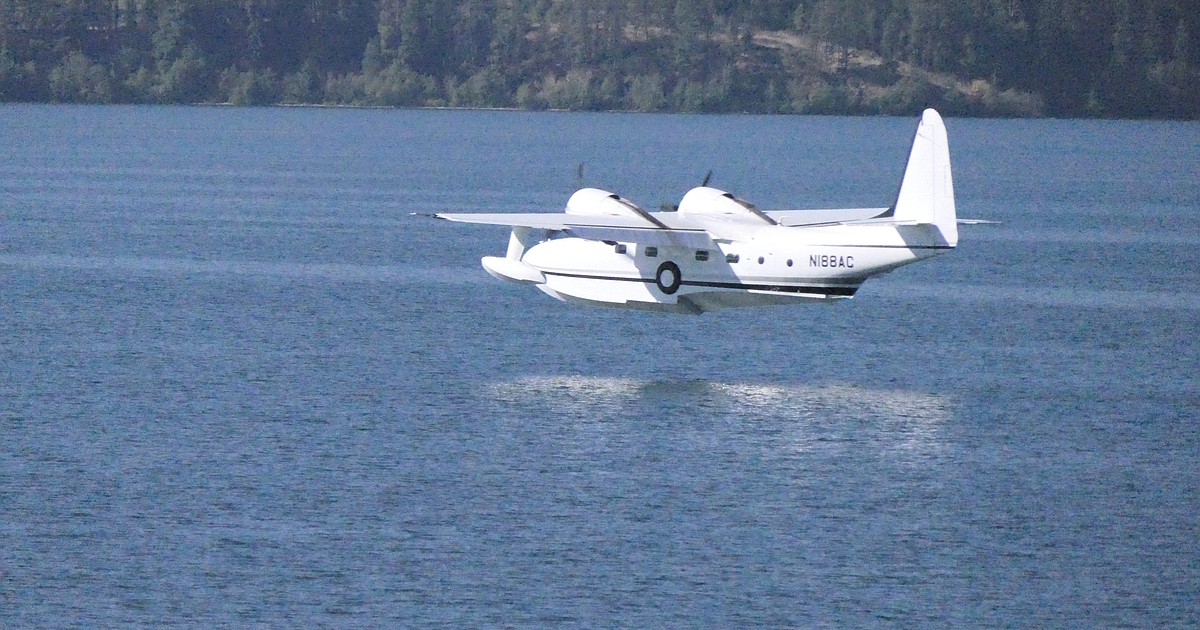 First, the distant roar of engines. Next, a dot in the sky above the picturesque Mary Ronan Lake which rapidly grew larger as it appeared over the manicured lawns and shoreline of The Lodge and Resort named after the sparkling jewel of a lake below.

A quick circle and the plane was heading for a meeting with the lake.

It was expected, indeed eagerly awaited, by the crowd of nearly 100 seaplane enthusiasts and curious Lodge guests, as well as surprised but delighted campers on the forest-covered road that leads to the majestic Lodge and its vast range boat ramps and mooring facilities. .

In contact with the belly of the plane, in this case, a vintage 1951 Grumman Mallard grew, as did the spitting spray cock tail of the landing of the bright white amphibious plane that ushered in this which was described in publicity brochures as The Seaplane Invasion of Lake Mary.

After making a successful landing on the surface of the lake, the elegantly preserved Mallard, a twin-engine aircraft that can carry up to 10 passengers in its cabin, circled and slowly skimmed the water and headed for the beaches and docks of the Lodge.

“It’s a great day for that,” said self-proclaimed “campground host” Dean McGinnis. “It’s good to see so many people coming to this event.”

More than a dozen seaplanes of various sizes and brands were on display Saturday morning, much to the delight of the group of spectators. Small planes were able to moor at the deck of the Lodge, while larger planes like the Mallard and the ‘Navy’ sporting the Grumman Widgeon anchored several meters from shore as crews and passengers were ferried at the wharf complex by one of the greats of the Lodge. inflatable boats.

Loel Fenwick, who was co-pilot of the Mallard seaplane, said flying the big plane and landing it on water is made easier by the plane itself.

“It’s an easy plane to fly,” said Fenwick, who is from South Africa and took his first ride in a “flying boat” decades ago. “This plane is one of the classics that deserves to be cherished and preserved.”

Fenwicks’ grandson was the Mallard’s co-pilot and relied on his grandfather’s experience and knowledge when asked about the aircraft.

Fenwick said the Mallard was built to airline standards when it was put into service by several airlines.

“It’s the most luxurious seaplane ever built,” he said proudly of the plane, which was first flown in 1946 and used primarily by civilian airlines. It was manufactured from 1946 to 1951. Only 59 were built before the aircraft evolved into the Grumman HU-16 Albatross.

Another Grumman aircraft, this one a beautifully restored and maintained Grumman G-44 Widgeon, was also among the amphibious aircraft that stopped in front of the Lodge. The Widgeon, which was originally designed for civilian use, first flew in 1940. The aircraft was used by the US Navy, US Army Air Forces, US Coast Guard and Royal Navy during World War II. A total of 317 craft were built and used primarily for patrol and utility missions by the Navy and Coast Guard.

After the war, Grumman redesigned the aircraft to make it more suitable for civilian use. Hull modifications to improve handling on the water and additional seats were added by Grumman, who built 76 of the new version of the aircraft. The Albatross version also had a brush with “renown” when it was “de plane, de plane” used in the TV program Fantasy Island.

Ron Reeves and his wife Julia were camping just down the road at Lake Mary Ronan State Park Campground when they heard and saw the first plane overhead. They had heard about the campsite from a seaplane, so the couple from San Diego rushed to the Lodge to check it out.

“It was a cool thing to do in the middle of our vacation,” Reeves said. “We were already having an amazing time at the campsite, it just upped the ‘cool’ level for the whole trip.”

As part of the fly-in, the Lodge and Resort featured live music and several dining options throughout the day, much to the delight of spectators and pilots alike.

“We have been here before and have always appreciated the quality of our treatment during our time here,” Fenwick said. “It’s a very special place to land among the places that can accommodate amphibious aircraft.”

Following the event, most of the planes took off for Polson on Flathead Lake, heading for a refueling station that could accommodate the various models on display at the “Invasion”.