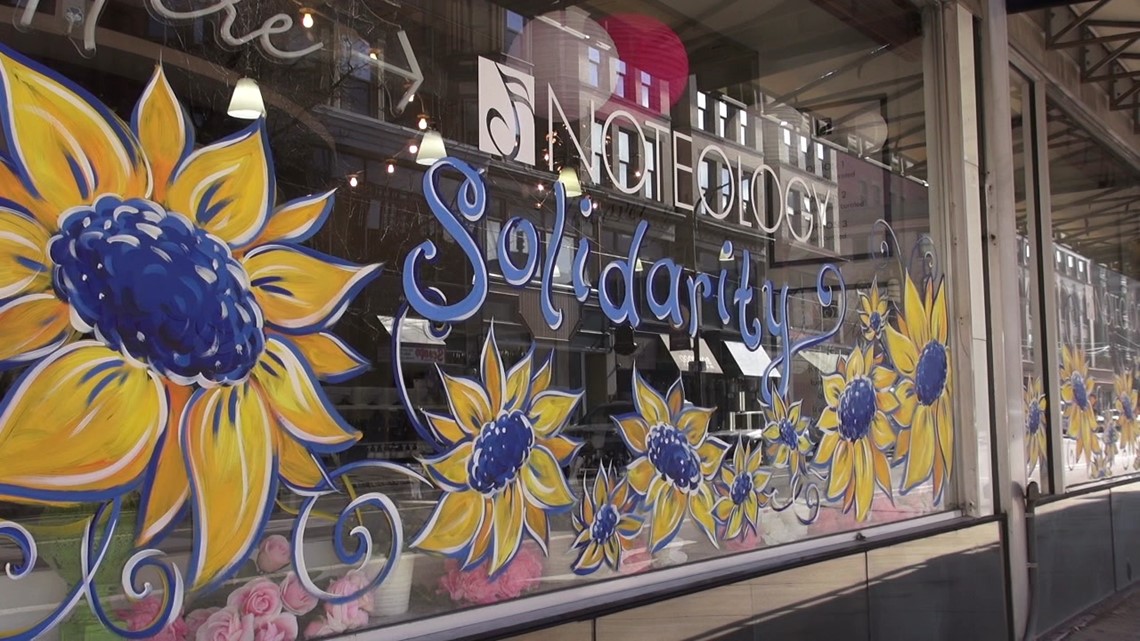 An effort in Electric City to support the Ukrainian people has taken off. Storefronts and buildings across the city are decked out in blue and yellow.

SCRANTON, Pa. — The Diocese of Scranton is just one of many places that now fly the Ukrainian flag. A special mass was held at St. Peter’s Cathedral on Friday afternoon to allow parishioners to pray for peace in Ukraine as the war with Russia continues.

This is a citywide effort that was born out of a desire to do something to help.

Nada and Company on Capouse Avenue was one of the first to make a storefront statement when a shipment of blue and yellow dresses arrived nearly a month ago. Since then, there has been a snowball effect.

“It says a lot about how important this community is. Unfortunately, it brought us together, and I think we’re still so divided, and I think we just realize our hearts are breaking,” Nada Gilmartin said.

The effort to show support for Ukraine was led by the non-profit organization Scranton Tomorrow. You can see the colors of the country in almost every street in the city center. Businesses show their support and creativity at the same time.

Christine Medley owns The Workshop on Adams Avenue. It gives typographical impressions of the Ukrainian flag.

“At this point, I’m just giving them away for free. If you want to show your support, here they are. I feel a little better that I do something, even if you feel helpless and you can’t do much- Scranton thing,” Medley said.

The city also joined in the effort by hanging the Ukrainian flag at Scranton City Hall.

One of the most vibrant displays is at the corner of Wyoming Avenue and Biden Street at Noteology. The owners have upped the ante by selling a candle that raises funds for humanitarian efforts in Ukraine.

“I have this one left, and that’s it, and we’re sold out until next week. We’ll have more. We’re pre-selling at the moment, but there’s a huge amount of people actually offering them. “It’s a good thing. It’s good to support the charity and the people, but it’s also good to support a small business,” said Mark Bonfiglio.

Store owners we spoke to say they’ll keep the displays on for as long as they need them – hopefully not too long.

See more videos about our region’s connection to the crisis in Ukraine.