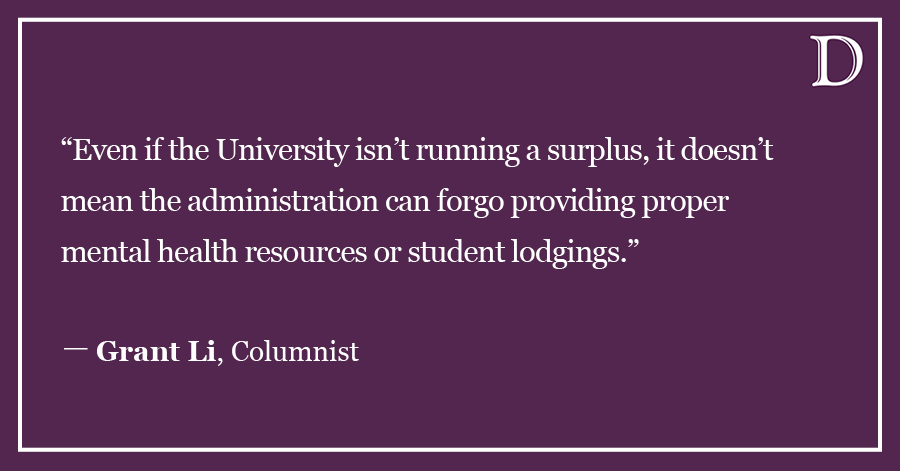 During Wildcat Welcome 2019, Northwestern University Libraries had a small table outside Deering Library to hand out pins featuring Deering as Hogwarts. I loved these pins and was so excited to be able to use the library every day. Someone in my peer group said their goal was to work in the library, and I shared similar sentiments.

Now we both work at Deering, but my experience was a bit of a reality check. A historic building will always have its problems, but Deering is in a pitiful state. In particular, the widely advertised Eloise W. Martin Reading Room has torn carpet and broken chairs. The other day I was handing out extension cords because some of the ones placed on the floor to provide power outlets for the students weren’t working. Worse still, since the winter, the roof has been leaking, threatening the books and forcing us to isolate a part of the library usually occupied by students reclining in armchairs. You don’t have to glance at it to see that our libraries really need help.

Recently, the University announced that it has hired Xuemao Wang as the next Dean of Libraries and Librarian of Charles Deering McCormick University. He was previously in charge of the libraries at the University of Cincinnati. I hope the change in management will be a sign of a better future for our libraries.

Still, I harbor doubts about what Wang will actually be able to do, because most of the power to determine budgets and distribute resources seems to rest with the administration. Whether Wang can convince NU to allocate more resources to our libraries remains to be seen, but if the administration’s priorities so far are any indication, I’m not optimistic.

The University seems capable of mobilizing countless sums of money towards new sports facilities, while our libraries, counseling and psychology departments and even some Residential homes fall by the wayside. That’s not to say that sports facilities don’t deserve the funding they receive, but it often seems that the administration’s attention is drawn to sports facilities at the expense of things that other students really need. Ideally, the rest of the campus would receive at least the same attention.

When Thomas Jefferson designed the University of Virginia, one of his innovations was to place the library at the center of the university. It was unique at the time because usually the chapel was in the center. The library at the heart of the campus symbolized that the university should be a place of learning. Of the many obviously questionable and detestable legacies of the UVA’s founding, this is one we can appreciate.

On the contrary, classrooms, libraries, CAPS and residence halls should never run out of resources. Even if the University does not run a surplus, that does not mean the administration can forgo providing appropriate mental health resources or student housing.

There’s a whole slew of buildings and projects right now that seem to be on hold for various financial reasons, like 1835 Hinman and the Norris University Center (where the administration was unable to find a nominating donor). There are other buildings that also need attention. Locy Hall is probably a building code violation, and if not, the building code needs to be changed.

And of course, our libraries. We place them all over our brochures and advertisements and arrange tours for potential students across Deering. When it comes to committing money for its upkeep, there is clearly a lack of support. It just doesn’t make sense that a library in an educational institution could fall into such disrepair and not even make it on the list for renovations.

We should revere every library as if it were a chapel. Isn’t it a school? It’s not a hedge fund or a sports franchise with a university as a front, is it? Repairs and renovations to our libraries or funding for mental health should not be held hostage by the absence of a named donor.

It’s a shame that things like residence halls and CAPS aren’t exactly the glitzy buildings billionaire donors claim their name for, but we’re not asking for much. It’s 2022 and we’re laying faulty extension cords on the floor of the art library because there’s no way to get electricity to the tables any other way.

The University has a new president coming soon. I don’t expect much difference because the type of people who make it to that level in the world of higher education are all of a similar cut or have the same vested interests. But I wouldn’t mind being pleasantly surprised.