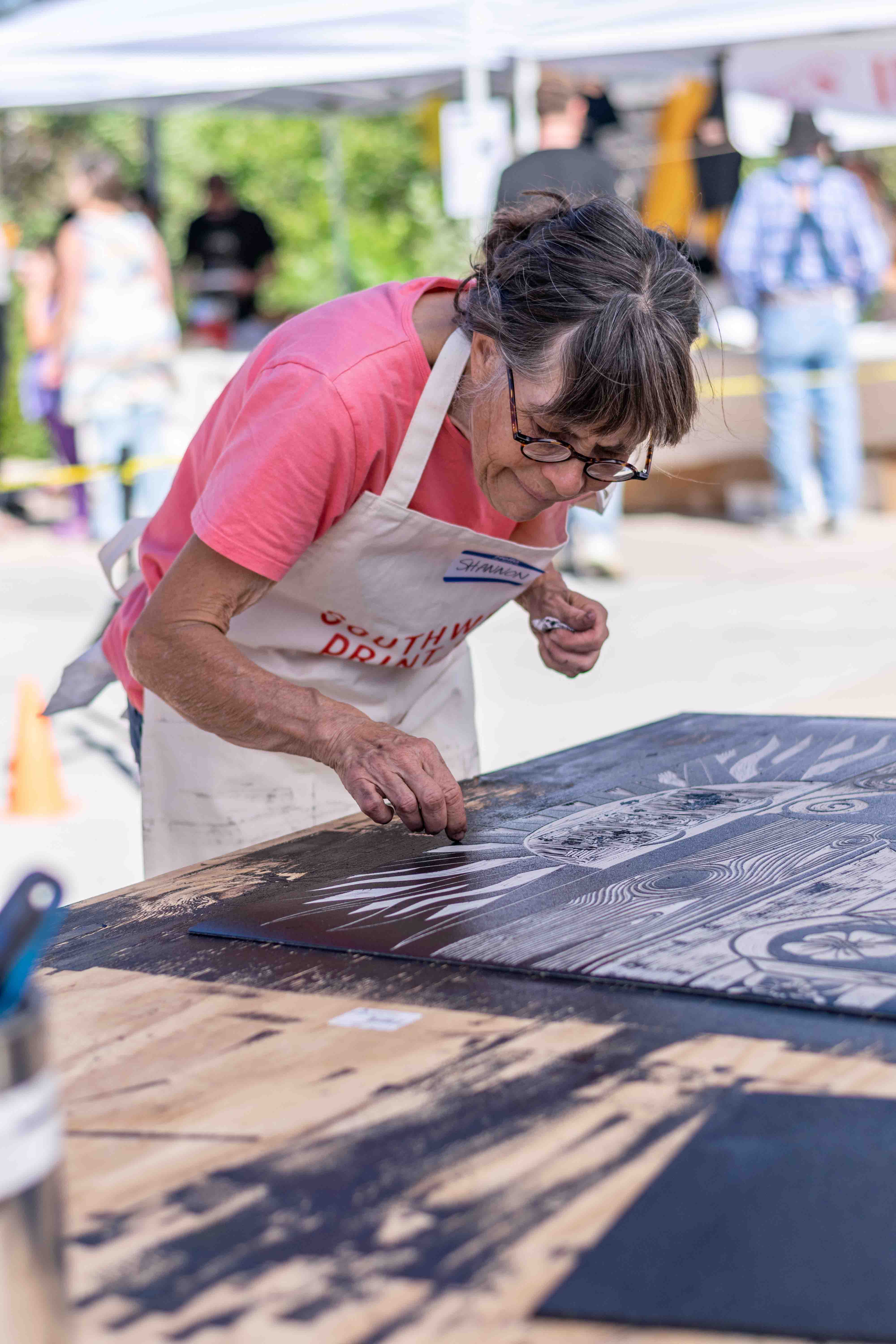 After a hiatus last year due to COVID-19, the Southwest Print Fiesta returned to the streets of Silver City last weekend, gathering a large crowd at the Saturday Print Market and bringing together artists and enthusiasts. printing from across the country for workshops, demonstrations and discussions.
Several of the weekend’s events took place online through Zoom, connecting local attendees with international attendees and artists.
“This is the first year that Jamie Karolich and I have run it,” said Kyle Durrie, event planner and owner of Power and Light Press. “It was a [Mimbres Region Arts Council] event in the past for which we have always helped, but we did not organize everything. It was our first year in charge.
While the Southwest Print Fiesta has always been held downtown, this year the fiesta partnered up with the Makers Market, using the Main Street Plaza space just off Big Ditch Park with permits from the City of Makers Market, she said.
“We basically rent space from them,” said Durrie. “They’re sort of shrinking to give us space. They have been great to work with them. They were very helpful.
While the fiesta was canceled last year, Durrie still orchestrated the second print exchange since the start of the fiesta. For this year’s exchange, over 40 artists participated, each printing 45 8-inch by 8-inch prints. Participating artists received a full portfolio of prints from other artists. During the weekend fiesta, the entire collection was also presented to Power and Light Press.
“Artists from everywhere [submitted prints] – a lot of them from the southwest, but also from California, New York and Illinois, ”said Durrie.
Several unique printing techniques were on display on Saturday at the printers’ market. Crowd favorite steam roller printing created 4ft by 4ft prints of five different artists. On the other end of the size spectrum, Manuel Guerra, an artist from El Paso, used a tortilla press for a printing demonstration on Saturday.
“It definitely pushes the creative limits of the medium,” Durrie said of the Southwest’s quintessential use of a tortilla press.
Artists Chip Thomas and Thea Gahr also did a live screen printing project on Saturday, while another artist used a risograph – essentially a modern digital handout – for their demonstration.
“We definitely have at least 10 returning artists who have done the festival in the past,” said Durrie. “There are also a bunch of new people, which is really exciting.”
The artists traveled from within the state, as well as Arizona, Texas, Colorado and California, she said.
Another project featured this weekend was put together by Karolich and Colorado artist Rosie Carter.
The two artists, who previously did an artist residency together, created the Knowledge Print Project, a community-driven print project that originated at the Mancos Common Press in Mancos, Colorado, Karolich said.
“This was a call and response project that we designed to interact with the community and incorporate typography,” she said. “The underlying idea is that we are launching a call for [Silver City] asking them to complete these three prompts: “I believe”, “I know” and “I understand”.
With the responses submitted, Karolich and Carter chose a number to print on vintage letterpress printing presses, offering the free prints to the community as “pieces of knowledge”.
“Anyone who brings in a little bit of knowledge is anonymous,” Carter said.
The pair have placed a retired newspaper vending machine outside the KURU radio studio on Bullard Street to distribute the free self-service prints. The box also featured a letterbox for those who wanted to contribute to printable responses.
As the Silver City edition of the project peaked over the weekend, the two artists plan to continue the project while visiting other communities in the future. Their next stop? North Carolina next spring.
“It’s about bringing together and sharing community knowledge through letterpress printing,” Carter said.
Because it was still not clear if big in-person events would be possible as Durrie and Karolich prepared for this year’s party, the duo decided to use Zoom for discussions and studio tours to ensure that the event can take place this year despite everything.
“What’s pretty cool about it is that it has, for the first year, opened the festival to people from all over the place,” said Durrie. “We are also very happy to be able to do things in person for our local community and the region. “