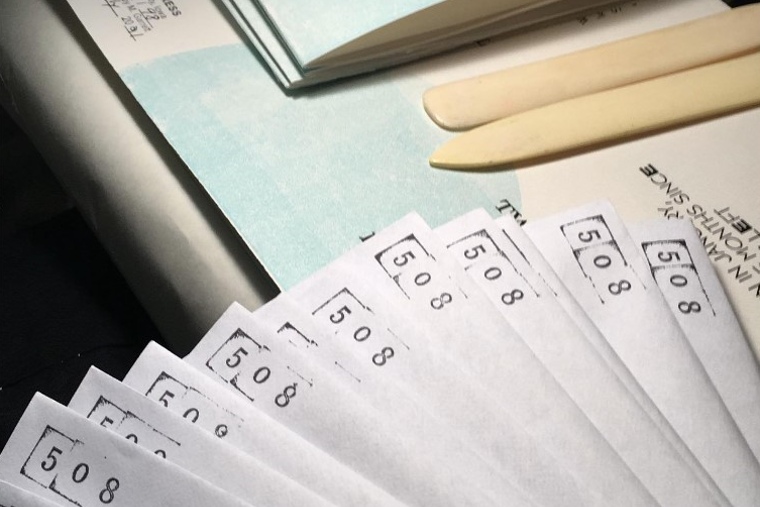 Mackie Garrett, founder of Iowa City’s 508 Press, started taking typography classes after being invited to an event at Public Space One by a colleague.

“I was at a point with some job changes where I felt a bit of a drift in Iowa City and started going to poetry readings,” Garrett said. He had a long-standing interest in typography and took his first class hoping to slow down and learn about a new creative medium. “I found it to be an accessible art form as someone who was not trained as an artist.”

Public Space One’s Iowa City Press Cooperative environment, where he took his first three typography courses, led him to take further courses with Paper and Book Intensive and eventually share his new passion with others via 508 Press.

508 Press is an independent Iowa City press that specializes in small print runs of often event-specific poetry. Garrett has created a reading series where he prints selections of poems and shared stories for the evening’s attendees. Each print is unique and works like a keepsake.

“I want a little roughness. I love print jobs that look handmade and may have imperfections,” Garrett said. He began his series of readings with the broadsides in mind, saying he felt lucky that other poets were also “ready to seize these opportunities to take poetry out of its traditional spaces”. The reading series usually also includes visual and musical arts.

“The overall goal is to bring together art forms that are different – ​​or considered different or separate,” he said. The long-term goal is to return to the recording studio (508 Press house band Antifahorn recorded with poets at Flat Black Studio) and pay artists for their contributions to events.

Everything about Garrett’s work at 508 is personal and based on the community in which he lives. His press is named after his grandmother’s address, where, he says, “I dreamed of one day putting books out into the world.” Although he sells 508 press publications at book and art fairs and on social networks, what is most important to him is that the work is in the hands of someone who appreciate. At many events, prints are free or available on a sliding scale, and he likes to send work in the mail.

“There’s something about making a limited-edition print of a single poem, something special for archival quality,” Garrett said of preparing for a reading. “I write and want to publish and print poetry that is accessible to people who might not be interested in it or might have had a bad experience with it in the past.”

Garrett said he was taught to either self-publish or be widely published. “I wanted to put that aside and embrace both camps,” he said, “and hopefully somehow 508 can bring the two together. These two different camps influence each other each other. I think you can have both.

This article originally appeared in the November 2022 issues of Little Village.