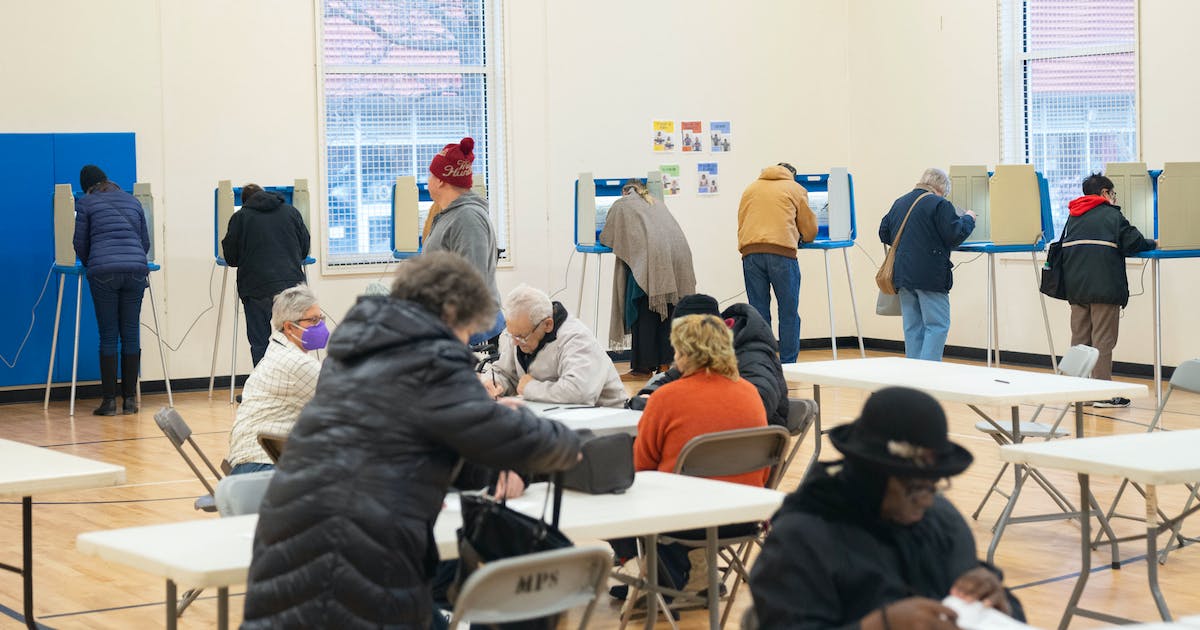 I’m a lifelong Democrat, so don’t let the title of this letter to the editor fool you. But I just don’t understand why Democrats haven’t figured out how to send messages that will get them elected. In poll after poll, the two biggest issues driving voters in November were inflation and crime. The Republicans embraced that, and that’s all they put out there. They didn’t even need to say how they were going to settle these two burning issues. They just said: Elect us and we will reduce inflation and stop crime, as if the Democrats support inflation and crime. Democrats, on the other hand, continued to discuss only the need for abortion rights, safeguarding democracy, and supporting LGBTQ+ communities. These are critically important issues, but they won’t get Democrats elected.

Listen people! If you want to support these fundamentals of liberal politics, then start messaging like the Republicans so we can get elected.

When you’re tired of the same old two-party system filled with crooks, lunatics, budding YouTube stars, and budding insurgents constantly arguing and belittling each other like 5-year-olds, please consider a future with an option viable third party that could actually compete in 2024. Enough of the “I’ll choose the less dangerous of the two” vote. Unless you’re in the top 1% and you’re willing to write a candidate a check, you’re pretty much irrelevant to both parties. I’m willing to guess that 70% of voters wouldn’t support either party’s extreme positions, but surprisingly, there doesn’t seem to be anyone interested in forming a third-party option. We need a more competitive option than the Green, Socialist, Marijuana and Constitution parties which would do little more than waste ink on a ballot.

Last Thursday’s featured letter to the editor about Kim Crockett’s campaign hit home (“How does she ‘restore trust’?”).

In 2016, Republicans elected a president who would cry “unfair” if he lost at a monopoly game. Because many believed everything this president said, they backed his foul play when he lost in 2020. If he runs again in 2024 and loses, we will hear the same.

Come on, Republicans, field a viable candidate who believes in our system. Suggest one that I might even vote for. The former president’s ego could never tolerate a loss. I can’t stand another four years of whining!

Many thanks to the City of Minneapolis Early Voting Officers for their efficiency, clarity of procedure, and most importantly, their presence and professionalism. I had the privilege of voting last week at a time that suited me thanks to all of their efforts. We, the residents of Minneapolis, have the chance to vote with confidence in a process that is convenient for voters. Thank you for a Minneapolis service well done.

The lawsuit brought by the Minnesota Attorney General’s office against Shipt (owned by Target Corp.) should be applauded as a major contribution to the protection of workers, taxpayers and businesses (“Ellison sues Shipt on workers’ rights”, October 28).

When companies wrongly “classify” workers as independent contractors rather than employees, they are not only shifting their costs to others, but depriving them of basic rights and fairness.

Workers bear the greatest impact of “misclassification” when companies “rely on workers to absorb most operating costs” — a crushing burden on them and their families. We have seen this, for example, among container drivers working in American ports, who are struggling with health insurance, social security contributions and all the expenses of their vehicles (insurance, maintenance and repairs, fuel, etc.). To cover these costs, drivers have to work long hours to earn a living.

Additionally, when employees are labeled as independent contractors by their employer, they are denied the ability to unionize. Under federal labor law, only employees have the right to organize and form a union to bargain collectively with their boss – and be protected from unfair labor practices by the employer. In the case of Shipt workers who want to adjust their pay structure, benefits and working conditions — as employees have recently attempted at companies like Amazon and Starbucks — they cannot. Companies like Shipt can then keep their workers voiceless and powerless to negotiate change.

But taxpayers are also forced to absorb the costs of “misclassifying” employees as independent contractors. States like Minnesota are losing millions of dollars in revenue in the form of workers’ compensation and other payroll taxes as well as unemployment insurance. Why shouldn’t Shipt pay its own operating costs?

Finally, companies that treat their workers as employees are at a competitive disadvantage. If an employer responsible for the high road pays its employees’ salary and benefit costs and its share of state taxes while another company is allowed to skate for free, how fair is that?

The author is the retired director of the International Brotherhood of Teamsters organization.

As a mom, being a customer at Shipt allows me to say “yes” to the important things in life. It’s because I can be my own boss – choosing when, where and how often I work – while shopping and delivering for customers. So I was disappointed to read that Ellison is attacking my ability to earn extra income on a flexible schedule with Shipt.

I usually deliver orders a few hours a day, four to five times a week so I can work without sacrificing time with my kids. The salary I receive has allowed my family to be financially stronger and has given me the opportunity to build up a savings account. And contrary to the Attorney General’s claims, I can customize my shopping experience by choosing the order sizes, locations, and times that work for me.

The freedom of being an independent contractor allows me to work more when I need to and less when I don’t. This freedom also allows other Shipt buyers to choose completely different times if they wish. It’s important for elected officials to listen to their constituents, and the vast majority of us want to remain independent contractors. This decision does not help independent entrepreneurs like me; it hurts us and the flexibility we rely on.

I was encouraged by Gayle Golden’s article in the Monday newspaper (“Minnesota Daily rumors of death exaggerated”, Opinion Exchange). My wife, Jean, Minnesota Daily’s award-winning overnight editor, would have been thrilled too. No one could foresee the changes to come when we first met in the basement of Murphy Hall, often after class with Mitch Charnley.

Jean’s college, which learned from the many professors and instructors at the School of Journalism and Mass Communication, led her to a distinguished career as editor, then deputy director of research and publications. at the Minnesota Historical Society.

Yes, we started with paper and typewriters, #2 pencils and rotary phones. We learned together to be comfortable with the dark and often cold streets of downtown Minneapolis where the Daily was eventually edited and printed each evening. Later, we recognized and quickly adapted to the explosive new challenges and advantages of the digital age.

If Jean were still with us, I know she would smile and applaud the perseverance of our university newspaper, its staff and advisors, and help lead our march into the future.