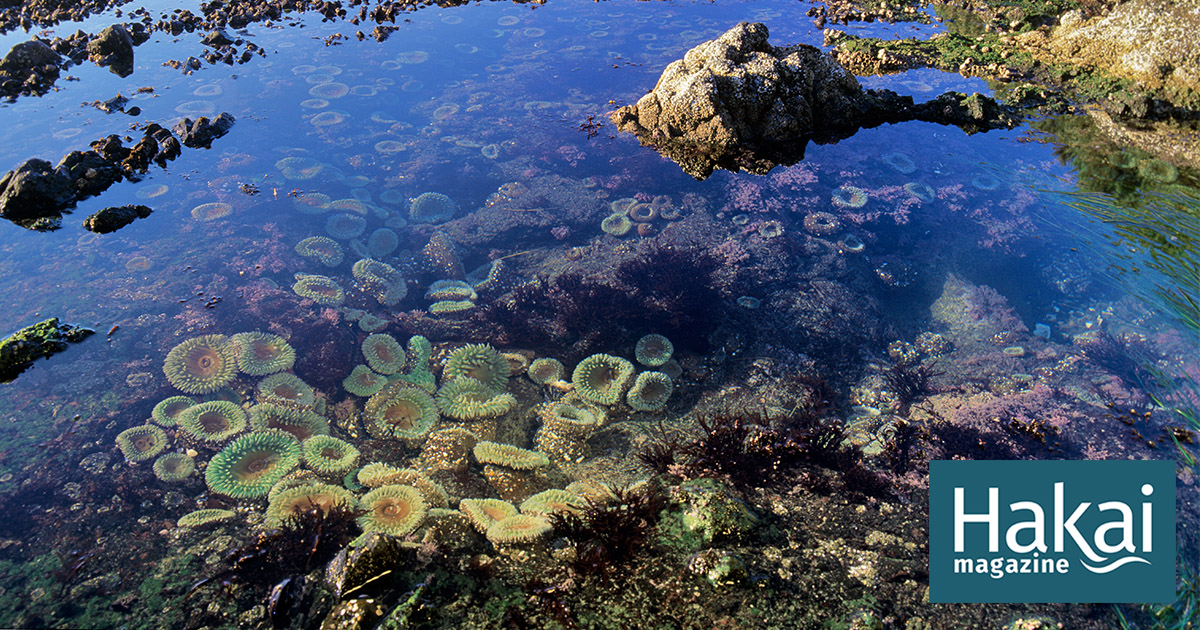 Bruce Menge has spent his career trying to detect ecological disasters. In the 1970s, as a marine biologist at the University of Massachusetts, he studied the thriving populations of blue mussels along the rocky coast of New England. In 2014, he revisited these same sites and found, to his dismay, that warming oceans had crushed the ecosystem. More than half of the mussels were gone, largely replaced by algae. Now he’s on the west coast at Oregon State University, looking like Oregon’s rocky intertidal zone nears disaster.

The Oregon coast is dotted with colonies of blue-black mussels interspersed with gray gooseneck barnacles. Perched above the mussel beds are tidal pools filled with red and green seaweed, ghostly white and pink anemones, and vibrant purple and orange starfish. Strips of lime green surf grass ripple in the shallow water. To a swimmer, the intertidal zone can seem vibrant, healthy, and unchanging from year to year. But this apparent stability belies the growing chaos of an ecosystem that appears to be heading towards collapse.

“We thought the system was in pretty good shape,” Menge says. “Actually, we’re not so sure that’s the case anymore.”

Since 2012, Menge and his colleagues have selectively disturbed six sites on the Oregon Coast. Each July, at each site, researchers carefully cleaned all marine life from a small patch of rock the size of a square of sidewalk, then monitored the recovery of the ecosystem as mussels, barnacles and algae recolonized the rock.

Researchers have deliberately manipulated small patches of Oregon’s intertidal ecosystem since 2012. Their experiments revealed the subtle signs of an environment on the verge of collapse, both in the experimental plots and, importantly, in the control sites. Photo courtesy of Bruce Menge

The work revolves around a key concept: a healthy ecosystem recovers quickly from a disturbance such as a heat wave or an epidemic. An ecosystem that is slow to recover could be close to a tipping point beyond which it collapses irreversibly. Disconcertingly, the research team found that each year, at each site, it took longer for the community of mussels, barnacles, algae, grasses and other inhabitants to return to its original state. prior. By the end of the study period in 2019, disturbed sites needed about 17% longer, or nearly nine additional weeks, to regain the abundance and species diversity they had in 2012. And the slowdown was subtle; Menge couldn’t remember noticing anything wrong on the pitch – it only showed up in the data.

Critically, Menge and his colleagues found that it was not just the communities they were scratching that were at risk. Year after year, the organisms in the undisturbed control sites also changed, with increasingly large fluctuations in what lived there. At one site in 2016, for example, gooseneck barnacles invaded the control area, covering up to 80% of the site after bad sea star disease wiped out one of their most large predators. Gooseneck barnacle populations declined in subsequent years, but numbers remained higher than before the takeover. The team has also seen kelp bleaching events and mussel kills each year at several sites.

Together, slower recovery times and reduced ecosystem stability suggest that as climate change leads to more frequent disturbances of intertidal ecosystems, local species may struggle to recover in longer recovery windows. shorter. In their place, other species, better adapted to the management of thermal stress or acidity, can settle there. As key species such as mussels, starfish or kelp disappear and the balance between disturbance and recovery time shifts, the ecosystem may shift irreversibly. This is the tipping point.

Slower recovery times in particular show that the lush intertidal is becoming less resilient and more susceptible to future disturbances, says Sarah Gravem, a marine ecologist at Oregon State University and a collaborator on the project. This decreasing resilience “makes the system more vulnerable,” she says, as evidenced by the increased variability of species found in communities. Together, the two could prepare the ecosystem for future disaster.

“We can’t really predict when that will happen,” Menge says, but increased instability as they observed in control patches “may suggest it could be imminent.”

Menge and his team had no reason to predict this outcome when they began the study more than a decade ago. “The West Coast system seemed pretty resilient for a long time, and we had no reason to think that would change,” he says via email.

“There’s no way to really mitigate that,” he adds – to attempt to do so would be a Sisyphean task. “It’s not a happy outcome.”

Although it is possible that the ecosystem will stabilize again if it is not faced with another significant disturbance, the eight-year study offers a subtle understanding of how an ecosystem is destabilized by climate change. . The experiments are expected to continue until 2030.

“The news is not good,” says Vasilis Dakos, an ecologist at the University of Montpellier in France who was not involved in the study. “A tipping point can take a long time to unfold, but the fact is, once it starts happening, you can’t stop it.”

For scientists who have dedicated their lives to studying ecosystems in the face of climate change, discovering this kind of unseen outcome can be deeply personal.

“It’s awful,” Menge said. “I mean, I love this ecosystem. I’ve worked in the intertidal zone for most of my career, and I always have a really good feeling when I go out in the field. I’m home from kinda corny way. And I certainly hope that, in fact, things change.