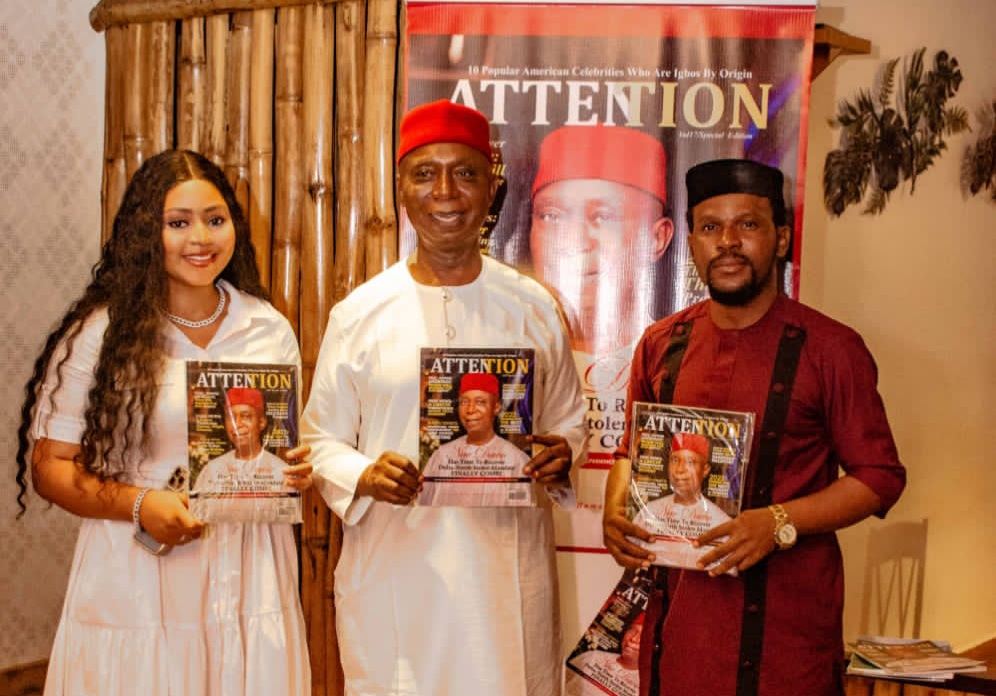 Billionaire businessman and senatorial candidate of the People’s Democratic Party (PDP) in the North Delta, Prince Ned Nwoko, officially received the copy of the latest edition of ATTENTION magazine, one of the most popular monthly magazines in the Nigeria.

He received the latest edition of the magazine which is the 17th edition at his private residence after a dinner with the team.

The editor, Alex Nwankwo, had recently led a team consisting of the editorial board during the presentation at Prince Nwoko’s residence in Abuja.

Receiving the crew in the company of his wife, Regina Daniel, Prince Nwoko applauded them for the richness of the content, the beautiful aesthetics as well as the texture of the paper used in the publication.

The 17th edition reports on Prince Ned Nwoko’s activities, programs and public engagements over the past six months. This has x-rayed his higher chances of becoming the next Delta North Senator with the tremendous goodwill he wields as well as his growing popularity and acceptance among his people.

He explained why he is ahead of others in the Senate race ahead of the 2023 general election.

The former member of the House of Representatives said that the magazine’s title alone, as the name suggests, grabs attention, coupled with its beautiful design and color combination.

Prince Nwoko whose photo was used as the cover of the latest edition of the magazine said, “The magazine is indeed very unique. When I saw the name, I saw a big difference.

“The content, the presentation, the color, everything is very unique. It’s something I recommend to everyone. The fact that I haven’t even been informed that something of this magnitude is being done for me means a lot to me.

He expressed his gratitude to the team for the upset which he said impressed him.

Also in his commentary, his wife, Regina Daniel, praised the exposure the magazine attracted when it was first released.

The magazine’s editor, Mr. Alex Nwankwo, said that the editorial board of ATTENTION Magazine is poised to promote the excellence that Prince Ned Nwoko represents.

He assured that the magazine was ready to continue to be exceptional in promoting good journalism, balanced and accurate reporting.