Newspapers vs Social Media, the Bulletin and Letters to the Editor 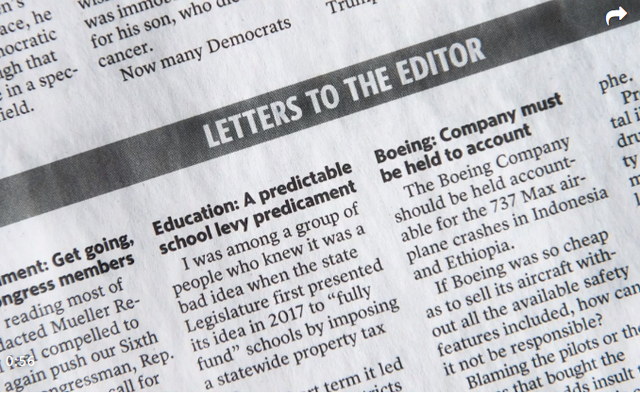 They exercise a freedom of expression centered on current affairs.

They are a business.

From an editor’s perspective, the ideal scenario is first and foremost exercising freedom of speech related to news reporting and being a business right behind it.

From a publisher’s perspective, the two are nearly identical, but the need to be financially able to print clearly takes top priority.

Unlike government, newspapers are a business.

And unlike the government, you have the ability to have a newspaper in your life.

Newspapers are not the government.

They do not have the power to suppress freedom of expression.

Newspapers are not the Internet.

It is not a free-for-all.

Rest assured that the government – the elected one and the one running the bureaucracy – is far from 100% happy with the newspapers.

The City of Manteca is no different or any other local/regional/state agency for that matter.

The goal when it comes to news columns is to inform readers of what the government is doing, warts and all. This often requires adding context. This may involve past actions, laws that local government must follow, and how a particular event or position is interconnected with other concerns.

There is no written government law that requires such an approach from newspapers.

Failing to regulate the press beyond the established parameters of libel and that was by design.

The founders of this country saw the power of print that can be delivered in various formats as a means of controlling the government created to implement the model of the Great American Experiment.

However, it is not the same for social media.

Social media – or more precisely what it is at its heart – is not a modern invention.

It’s the garden fence. This is the pub where like-minded people gather.

The mission of newspapers in addition to informing readers of what is happening in their community and providing context is to bring divergent viewpoints together in one place.

Understanding how others think and see the world is essential for a community to progress towards a common good where those with differing backgrounds and opinions can still work together as a civilized society.

This brings us to letters to the editor.

For the most part, these are opinions on current issues.

As such, they are not facts.

Nor are they the opinion of the newspaper or the publisher.

But given the platform, it’s not the same as social media, a loud debate in a pub or a conversation over a garden fence.

Letters are also not messages in themselves.

Those who write them do not publish them.

Instead, they are submissive.

As such, they are subject to editing instead of being moderated.

There is a huge difference.

Moderators come in after the fact and can choose to delete something.

Editors make this decision before a letter is published.

The standards are much higher in court for what a newspaper publishes than what Facebook allows to be published.

That said, not all newspapers are alike, although that may not be the case for companies that can apply cookie-cutter approaches.

Newspapers deal with issues such as length, whether what is said is obscene, patently offensive, and whether it is relevant, among other issues.

There is no one-size-fits-all approach to letters or between journals.

With regard to what the Bulletin publishes in the form of letters, it is a liberal policy.

It is not “liberal” from a contemporary political point of view. It is “liberal” in terms of the process determining what ends up in print.

The Bulletin – judging by what you can pick up at a newsstand within a radius of at least 100 miles, if not more – is allowed in length.

It is also liberal in the frequency of letters.

Frank Aquila and Larry Baca — the two most prolific letter writers at the Bulletin over the past 20 years — can attest to that.

Nearly 1,000 letters were probably printed until recently, when their frequency was limited to once a week.

Less than a dozen letters between them did not make the pages of the Bulletin. And often, segments of the letters have been edited for taste, clarity and brevity.

And while Baca and Aquila have their supporters, they also have their detractors.

Several of their critics have demanded that one or another be banned from the pages of this newspaper because of their opinions.

At the same time, there have been those who argue that the Bulletin – or more accurately the publisher – shares Aquila’s and Baca’s views.

Given that such claims have been made by those who want Baca’s letters gone and those who want Aquila banned from the pages, it is clear that neither in the general context of the letters are seen the Bulletin or the support of the editor.

Once again, all is not well. That said, beyond aiming for a level of propriety, opinions are far from being censored.

It is clear that the Bulletin’s letter policy is liberal in this respect and that criticisms of what is written in this column, though it may seem a bit personal to some readers, appear frequently in letters to the Bulletin.

*Letters are opinions at heart.

*The opinions expressed in the letters are not those expressed by the Bulletin or the publisher.

*Letters to the editor are not the same as social media posts.

*The Bulletin distributes letters to allow an exchange of divergent points of view necessary for the evolution of a community.

Newspapers are not social media.

As such, a reader should expect more.

This column is the opinion of the editor, Dennis Wyatt, and does not necessarily represent the opinions of the Bulletin or 209 Multimedia. He can be reached at [email protected]