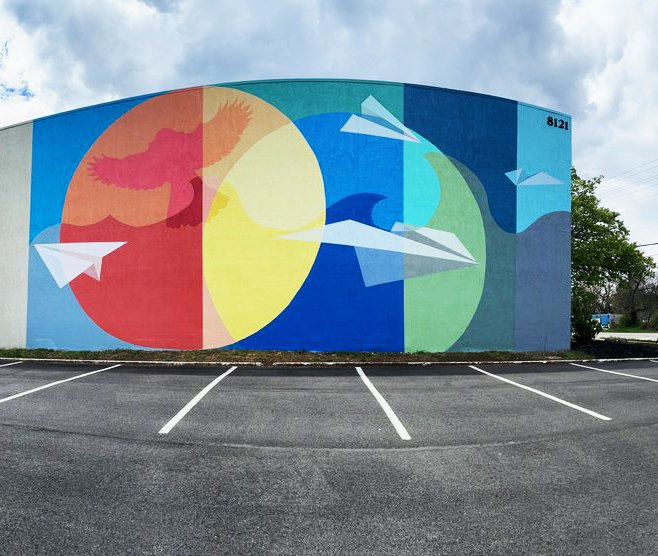 We’re used to seeing fun, creative, and colorful murals popping up on building exteriors around Old Town, Del Ray, Arlington, and the District. Now the Richmond Freeway Corridor in southeast Fairfax has its own mural at 8121 Richmond Freeway, just south of the Buckman Road intersection.

The public art project is the result of a collaboration between Fairfax Southeast Development Corporation (SFDC), the DC-based nonprofit Community Arts for All Inc. (CAFÉ) and other partners.

CAFE’s mission is to make cities safer and more beautiful through community arts activities. The mural was designed with the idea that color, light and constructivist style will better prevent vandalism and crime in the neighborhood.

According to CAFE’s Facebook page, the mural is meant to reflect the history of the area while setting the tone for the corridor’s present and future. “We used images of the rising sun, waves, planes and birds. The site of the mural is on Richmond Hwy along US Route 1 which serves the entire East Coast. It is the first place to see the rising sun in the United States. The waves represent the Little Hunting River, the Potomac River and the Atlantic Ocean. The airplane motif is a tribute to the original building owner who distributed airplane parts. And the cardinal bird is the state bird of Virginia.

The mural was painted by CAFE volunteers over a three-week period and was completed on April 10. The new mural is technically not the first public artwork located in Southeast Fairfax. In 2017, art students at Bryant Alternative School (2709 Popkins Ln.) completed a wall mosaic on the school wall.