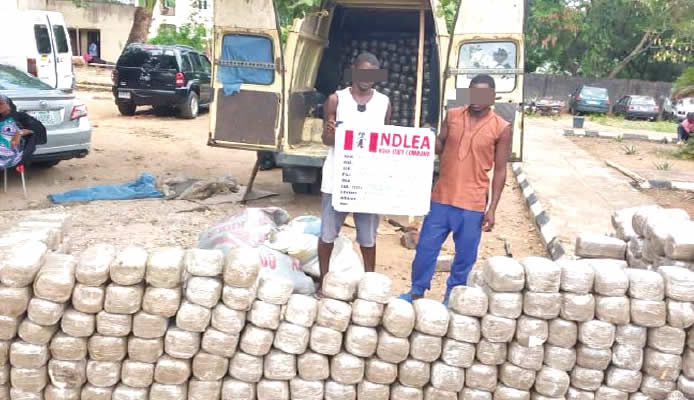 National Drug Enforcement Agency agents foiled attempts by Brazil-based drug cartels to smuggle large consignments of cocaine into Nigeria through three major international airports in Port Harcourt, Abuja and Lagos, which which led to the arrest of seven traffickers.

This was revealed by NDLEA spokesperson Femi Babafemi in a statement on Sunday.

Babafemi said three of the suspects were arrested while screening passengers on board a Qatar Airlines flight from Doha to Port Harcourt in Rivers State.

According to him, the three suspects left Sao Paulo, Brazil, on the same flight from Qatar en route from Doha to Abuja and Port Harcourt with a total of 24.96 kilograms of cocaine.

The agency said the first suspect, Udogwu Johnson, 51, was arrested with 5.48kg of cocaine concealed in plastic lotion bottles sealed with candle wax.

The suspect is said to have claimed that he agreed to traffic in the drugs for the amount of 1 million naira.

Ezekwueme Valentine, 32, was also arrested with 10.82 kg of cocaine packed in 84 sachets concealed in seven quilts, while the third trafficker, Chiezie Arinze, 35, was arrested with 8.66 kg of cocaine hidden in 115 breakable bottles of 30 ml in gold and silver color. factory packed with lotion on top.

Babafemi said the fourth suspect, Uchechukwu Onwugbufor, 42, was arrested in the airport parking lot while waiting to receive one of the traffickers, Udogwu James, and his cargo.

Babafemi said, “He claimed he was contacted by someone in Brazil to receive Udogwu and drive him to Lagos for the amount of N100,000. Uchechukwu Onwugbufor was at the airport with his neighbour, Nwogu Ezimadu, who is also under investigation to determine whether he is an accomplice to the crime or not.

“Father-of-one says he is an Ezeagu auto parts dealer in Ezeagu LGA, Enugu State. He said he lived in Cameroon for six years before starting in the drug business to raise money to expand his business, he added that he was introduced to the man who gave him the drugs in Addis Ababa by another person serving a prison sentence for an offense drug-related at Doula Newbell prison.

“In Lagos, another Brazil-based passenger, Uba Samuel, was arrested at Murtala Muhammed International Airport by NDLEA officers on Friday, April 15 upon his arrival on an Ethiopian Airline flight from Sao Paulo. via Addis Ababa to Lagos with sachets of cocaine. weighing 633 grams hidden in his shoes and his tube of toothpaste.

The suspect, who claimed to be a shoemaker and barber, is from Umunneochi, Abia State.

While accepting ownership of the drugs, he said he used his knowledge of shoemaking to conceal the drugs in his pair of sandals.

Uba, a regular traveller, reportedly confessed to buying the drugs to resell at a market in Abia.