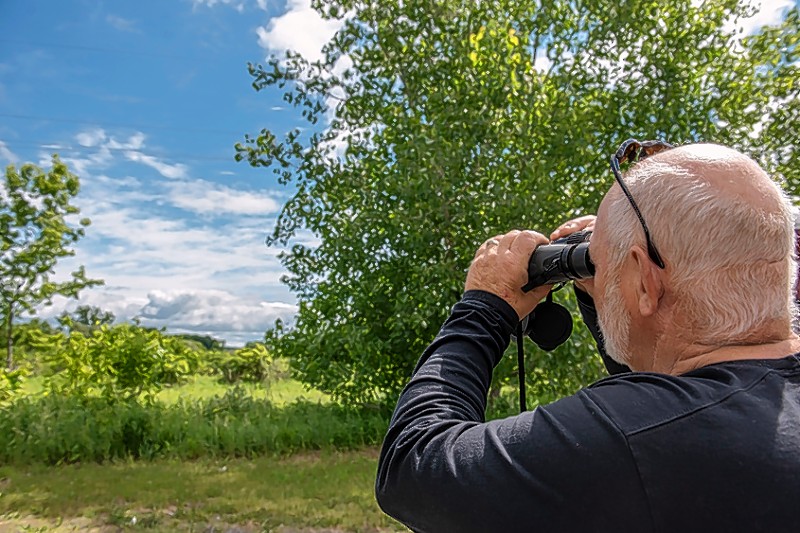 Bill Combs Jr. sees bald eagles where others only see trees, sky, or patches of cloud.

He’s driving on New York State Route 7 in the Schoharie County hamlet of Central Bridge when an eagle catches his eye – something most motorists wouldn’t notice, or even know to research. He parks his truck on the side of the road, jumps up and carefully looks up.

“I think it’s one over our heads,” he said, watching the bird hover among the clouds, noticeable but barely visible. “Yeah.” It stops, tracking the rapidly moving dot. “He’s getting closer to us. It rises in the blue now.

Combs has a knack for finding bald eagles, and he’s also a fountain of knowledge, with a storytelling knack for telling facts and anecdotes about the majestic and once rare birds. He points to a small group of red-headed vultures circling some distance from the eagle and recounts the drama unfolding in the sky.

The bird, he says, is immature – about two years old and lacking the distinctive white head of an adult.

Known as The Eagle Man, he is the founder of the Schoharie County Eagle Trail, a self-guided birding route that puts visitors in a good position to see bald eagles in the wild.

Officially announced in fall 2020, the Schoharie County Eagle Trail includes 18 viewing sites and hotspots. A lookout spot is within sight of an eagle’s nest, while a hotspot is a place where eagles are known to hunt and fish. These centers of eagle activity are spread throughout the county, taking eagle seekers to Gilboa, Middleburgh, Cobleskill and other localities.

Combs maintains the trail and also gives presentations at events, sharing his ideas about bald eagles in an effort to educate and raise awareness.

He posts regularly on social media, providing Eagle Trail followers on Facebook and Instagram with a constant stream of awe-inspiring videos and photographs. A monthly newsletter, Tales from the Trail, is a lively read, a folkloric and enthusiastic window into Schoharie County’s bald eagle population.

Years of bird watching and photography have made Combs intimately familiar with the bald eagles whose whereabouts he chronicles. He knows where they live, their habits and routines, their meeting places.

“A lot of it is patience and research,” said Combs, a 64-year-old, outdoor enthusiast and talkative, whose speech is peppered with laughter.

“Bill is just a one-of-a-kind type of human,” said Sam Forehand, a strategic collaborations and communications associate for Schoharie Economic Enterprise Corp., a leading Eagle Trail proponent. “I didn’t know I wanted to know so much about eagles [until I met him]. He brings such a level of interest and passion to the trail, to the birds, to his photographs – it’s truly inspiring.

Once on the verge of extinction, bald eagles have made an impressive comeback.

In 1976, there was only one pair of bald eagles nesting in New York.

A restoration program, initiated that year by the state Department of Environmental Conservation, aimed to replenish the state’s bald eagle population.

Baby eagles from other parts of the country were brought to New York and released into the Montezuma National Wildlife Refuge in central New York, on artificial nesting platforms where human keepers fed and watched them until that they are able to fly.

These eaglets learned to hunt and feed on their own, and in 1980 the first two eagles imported to Montezuma were found nesting in upstate New York near Watertown.

In 2007, the bald eagle was removed from the federal endangered species list, although it is still protected by the Migratory Bird Treaty Act and the Bald and Golden Eagle Protection Act. Harassing, disturbing or injuring a bald eagle is punishable by up to $20,000 and/or one year in jail.

In 2021, there were at least 397 active bald eagle nests in New York City, according to the DEC. In Schoharie County alone, there are at least 16 active nests, which Combs monitors, collecting data that he reports to the agency.

Schoharie County’s population of bald eagles has flourished, and so has the excitement around their presence.

“A lot of people I talk to, locals here, grew up in a time when they were patriotic,” Combs said. “They served their country – the army guys, the veterans. And they’ve never seen an eagle here. They were raised in this county and have never seen one.

In recent years that has changed, in part because Combs is such an effective ambassador for the birds.

Schoharie County, with its vast tracts of farmland, is a perfect habitat for sharp-eyed eagles, which like to build nests near open fields and water.

“You have a lot of hay fields,” Combs said. “They are regularly clipped…and an eagle can see animals passing through them. Between Cobleskill Creek and Schoharie Creek there are fish. The animals come to drink in the creeks. There is a rich diversity of animals for eagles to eat.

Combs moved to Cobleskill from Florida about 16 years ago.

In the Sunshine State, he ran country-western nightclubs — a job that introduced him to stars like Reba McEntire, Brooks & Dunn and Tim McGraw.

His hobby was wildlife photography and he took thousands of photos a year.

At Everglades National Park, “I would take my camera in the kayak with me and kayak as far as I could, or hike, because that way I get pictures that no one else could see. ‘other gets,’ he recalls.

These days, photos of Combs are occasionally shared by the state Department of Environmental Conservation, and in 2020, a stunning photo of a red-winged blackbird hitchhiking on the back of a bald eagle Whitehead at Cobleskill Reservoir was featured on Fox News.

Schoharie County Eagle Trail viewing sites and hotspots keep bird watchers at bay, protecting both birds and humans from a wildlife encounter gone awry. New nests are not highlighted to help eagles acclimatize to the area and have a successful first year of hatching.

Of course, there is no guarantee that visitors will see a bald eagle.

“We’re trying to provide the best opportunity to see an eagle in the wild in its natural habitat,” said Combs, who organizes special eagle-watching events for Friends of the Trail who donate at least $10.

Combs and others point out that hiking the Schoharie County Eagle Trail isn’t just about seeing eagles – it’s about getting out into the country, seeing some of upstate New York’s most beautiful scenery, and discover other attractions, such as restaurants, farms and breweries.

“We hope that by highlighting these vantage points, we can do something positive for the community by bringing people here to see the beauty we see every day,” said Steve Harris, Chairman of Sterling. Insurance at Cobleskill, an Eagle Trail sponsor.

Sterling Insurance, at 182 Barnerville Road in Cobleskill, is the first stop on the Schoharie County Eagle Trail.

There is a viewing platform, where brochures with bald eagle facts, etiquette and spotting tips – “don’t approach eagles within a quarter of a mile” – and a map are available.

On a recent weekday morning, Combs pointed his camera, which is equipped with a powerful telephoto lens, at a nest about a quarter mile away, but the eagles were not visible — they were lying down, Combs said, for get shade.

“I try very hard not to disturb [the eagles]Combs said. “I have the equipment – I don’t need to come near.”

Combs had better luck at Schoharie Valley Farms on Highway 30, where he focused his camera on a tree-covered ridge above Schoharie Creek and immediately spotted a baby eagle in a nest.

“Do you see the baby?” he said. “See the little V, the tree right in front of us? There is a dark bump – it’s right there. This young bird was about eight weeks old, won’t start flying for about seven weeks, and depends on its parents to provide it with what it needs. “He’s waiting,” Combs said. “He has no food.”

The Eagles mate for life, and Combs thinks there’s a lot to appreciate in such a committed partnership.

“They’re like us,” Combs said. “They are devoted to each other. They share all the tasks. They nest together. They sit together on the eggs. Their only job is to make sure their youngsters succeed.

“The more I watched them, the more fascinated I became with their life together.”

More from The Daily Gazette: