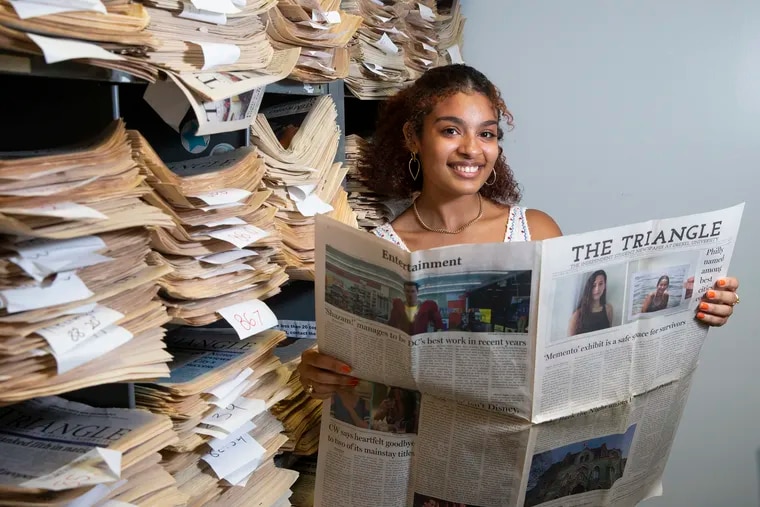 Of all the college programs in her native Philadelphia, Kiara Santos chose Drexel University to launch her journalism career, as she prepares to achieve her goal of becoming a top editor in the news industry. .

Now a communications student, she aspired to be a leader at The triangleDrexel’s independent student newspaper and joined the team of reporters in the fall 2018 semester of his freshman year.

Months later, COVID-19 interrupted activities on campus and impacted the lives of students like Santos working for the newspaper. The last weekly edition on which she worked for the online newspaper appeared in the summer of 2020. The Triangle and its team then fell silent.

After a nearly two-year hiatus, Santos and five students reunited in March to revive the newspaper.

With a leadership vacuum after several students graduated and financial difficulties stemming from bankruptcy in 2018 who forced the printed editions to cease, Santos and the others Triangle volunteers got off to a rocky start.

Santos applied to be the new arts and entertainment editor. But, she received a different offer: that of the triangle then editor asked him to take over publication. Today, the 22-year-old senior is the first black editor of The triangle. The staff has just published an online edition and is working to offer at least one print edition in the fall depending on finances.

Born and raised in Kensington, Santos attended Russell H. Conwell Middle Magnet School and Little Flower Catholic Secondary School for Girls. An Afro-Latin woman of Caribbean descent, she was raised by her mother, a Dominican from Manhasset on Long Island, NY, who constantly urged her to “tone down” her Dominican because she was born in the United States. Santos said she could never fulfill her mother’s request.

While at Drexel, Santos didn’t have a summer break. She works part-time shifts in addition to her co-op program and role at The triangle. In her quest to become a professional journalist, Santos realizes that she must move toward success, while developing her leadership skills. Currently, she is a Special Project Associate for Mighty Writers, Communications Associate for the Lenfest Institute for Journalism.

Eight weeks in the role at The triangle, Santos has her hands full: She reconnected with Drexel alumni who held positions at the newspaper to get their advice. It recruits a diverse group of journalists and editors to work across the newspaper’s four beats and business areas. She leads on-campus marketing efforts regarding the return of The triangle and coordinates content production. All this while organizing the new office space, a large media room in the basement of the Creese Student Center that needs repairs and cleaning.

Despite the challenges, a team of about 20 students are working on their personal computers to bring The Triangle to life. Students donate their time and personal equipment to run the 96-year-old independent newspaper which is neither funded nor operated by Drexel. More recently, the university organized an advisory council to support The triangle, chaired by communication professor Ron Bishop. On Friday, June 10, the team released that of the triangle first issue online since 2020.

The Inquirer spoke with Santos about her vision for the student newspaper, her goals, and what it means to be the first black editor.

To be completely honest, it’s a crazy manifestation of my dreams. Even though I was kind of thrown into this position, I always wanted to run a student newspaper. Not just for resume writing, but because it’s something I knew I would be good at.

I joined The triangle, because I wanted to be a strong writer and learn the ins and outs of running a student newspaper. I remember stepping out on my first assignment, a Me Too protest in Penn, with my audio recorder in hand. And I just fell in love with the whole thing…but, at the time, I thought there was no way I could climb the ladder with all the white boys in power.

So, I said to myself then: ‘When you are a senior, Kiara, you will be an editor.’ And look at me now! It’s just amazing. The triangle is my home.

It was very tiring. Having to send out agendas, schedule meetings, contact former staff, blast people on social media about the return of the newspaper, and recruit new staff has been exhausting, especially since I started this role without transition and without knowing what I was doing. It has been difficult to bring people together to rebuild this return. Some did not want to spend 3-4 hours of their week in a cold and dusty basement, but we managed to overcome the differences and the difficulties. Now we’re a bunch of geeks, passionate about a newspaper, volunteering and treating it like we work for The New York Times.

They say a Drexel grad always gets their dream job, but I know I have to take a different path to see myself succeeding, winning a Pulitzer. Because of these and other circumstances, I had to learn how to hold a job, how to talk to a boss.

A few days ago, I didn’t know how I was going to do my shopping. Still, it’s about focusing on me and my skills. The more integral my character, the better my chances of reaching those levels of success. In the end, when it comes to the good versus the great, it’s passion and concern for the mission that makes the difference.

This networking is just as important as networking. The strength of that of the triangle The alumni network is amazing and supportive. This leadership training must become widely available to all students. We grow up adults with a lot of drama happening after all. And that it’s really valuable to learn how to take feedback. My friends from college told me how to do my job better and it was all for the best of me and the project because it helped me see and do things differently.

I definitely want to print again. We have funds left just to print another issue. I don’t know yet what the framing would be, if it would be a special edition or not. But, I can’t wait to produce it for September-October. I want to build a legacy The triangleby rebuilding a structure for the newspaper, which has all the resources it needs and which ensures its proper functioning.

I want it to have a strong newsroom, with an editor to help with the transition when students graduate or leave a position. I want to guarantee that it has a strong DEI effort. (…) When I quit after graduation, I want it to be a diverse and financially strong student newspaper. One that’s as good as other area papers like Penn and Rutgers.