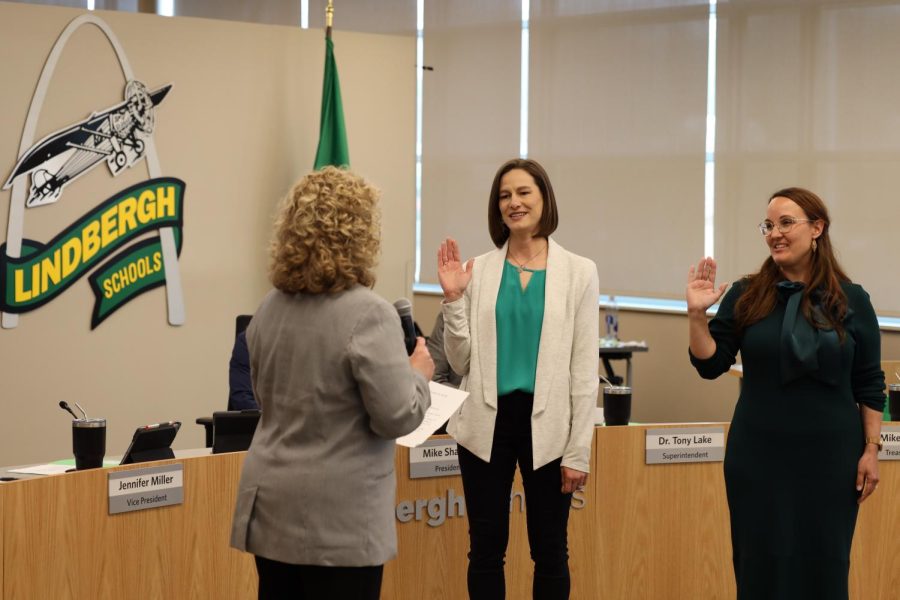 Christy Watz is sworn in to Jennifer Miller and Julia Voss at the Lindbergh Board of Education.

The Lindbergh Board of Education swore in new member Julia Voss, returning member Jennifer Miller and elected its officers at a meeting on April 12.

Voss and incumbent Miller won the two vacant board seats over David Randelman and Carrie Clay on April 5. This is Miller’s third term on the Lindergh School Board after he was first elected in 2016.

Former Treasurer Mike Tsichlis did not run for re-election and is instead running as State Representative for the 96th District. He will face Brad Christ in the August primary.

“Six years come and go, it seems. I raised a son in this district and he was able to accomplish things that he might not have been able to do without the support he got in this district,” Tsichlis said.

Tsichlis said it’s important for the board to continue working toward an environment where members remain respectful and attempt to reach consensus when needed.

Miller, who has served as vice president for the past three years, was nominated and unanimously elected chairman of the board. Former secretary Christy Watz was elected vice-president. Megan Vedder was elected secretary and Matt Alonzo treasurer.