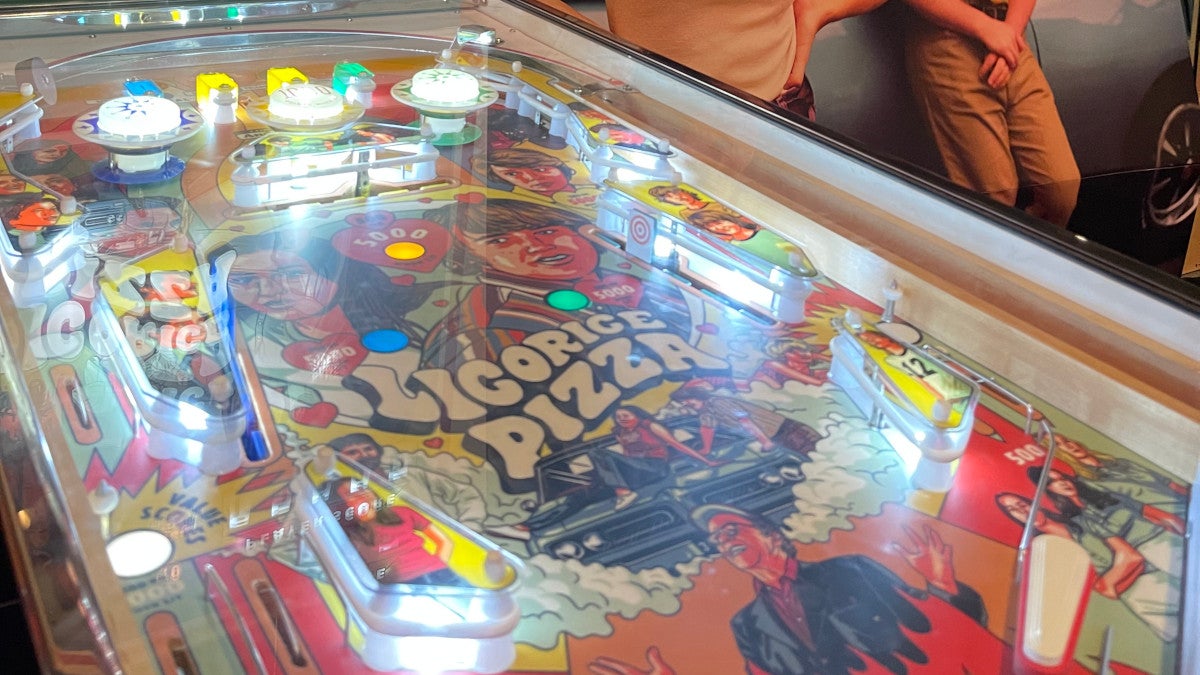 Here’s a full look at the ‘Licorice Pizza’ celebrations taking place at Alamo Drafthouse cinemas across the country:

Alamo Drafthouse is one of the very few theaters across the country to screen “Licorice Pizza” on beautiful 70mm celluloid, Paul Thomas Anderson’s favorite format. Austin’s flagship theater in South Lamar has just completed the installation of a 70mm projector and will join the company’s locations in San Francisco and Brooklyn to deliver “Licorice Pizza” in a special widescreen format.

They said it couldn’t be done… but with a title like “Licorice Pizza” you must have a special menu, right? Led by returning veterans Trish Eichelberger and Brad Sorenson, Alamo Drafthouse’s culinary team has developed a special licorice pizza menu that will be available nationwide during screenings starting December 24.

Each screening of “Licorice Pizza” will begin with a personalized, commercial-free pre-show, an exclusive benefit of Alamo Drafthouse. Guests will enjoy unique memories of The Valley, entertaining clips from relevant films and shows, and personalized editorial content such as their in-depth dive into the historical inspirations and collaborators that drove Paul Thomas Anderson to create “Licorice Pizza”.

Starting in January, select Alamo Drafthouse locations coast to coast will feature a limited series of repertoire programming called The “Licorice Pizza” Mixtape. Each track was chosen to capture the vibe, sights and sounds of “Licorice Pizza,” including – naturally, Anderson’s previous period pieces set in the Valley, “Boogie Nights” and “Inherent Vice. “- as well as” Fast Times at Ridgemont High “and” American Graffiti, “which were each cited as influences on the film. You can enjoy the valley vibe at the theater or via Alamo On Demand, the streaming service the cinema.

“The initial tracklist was from an exchange between programmer Jake Isgar and myself reacting to the trailer. We sent this list to PTA and he added a few that made a lot more sense when we saw the movie, “says John Smith, senior film programmer for Alamo Drafthouse.” If you find yourself leaving the theater and want to see the movie that Sean Penn’s character was making, well, lucky day, we are projecting BREEZY in January. “

Alamo Drafthouse Launches Vintage Manual Heidelberg Typography From The Press Room To Create Limited Edition Typographic Prints designed as replicas of the entertainment page of the Valley Hours, featuring both vintage ads from the San Fernando Valley as well as ads inspired by the movie. Limited edition prints will only be available during film screenings at Alamo Drafthouse venues on opening weekend, while supplies last.

The Alamo Drafthouse Lower Manhattan lobby will host the Fat Bernie Waterbed Photoshoot, inviting moviegoers to experience liquid luxury on an exact replica of the film’s “Fat Bernie Waterbed”. Guests even have a chance to win tickets to HAIM’s May 17th concert at Madison Square Garden by sharing their waterbed photos on Instagram with #LicoricePizza and tagging @Drafthouse.

In addition, the halls of Alamo Drafthouse Brooklyn and Austin’s Alamo Drafthouse South Lamar are home to two official and super-rare “Licorice Pizza” pinball machines, both set to “free play”. Players can take a photo of their best score and post on Instagram, tagging @Drafthouse and using the hashtag #LicoricePizza. The highest score posted on Instagram will win a set of vintage “Licorice Pizza” era movie posters and a pair of tickets to the HAIM: The One More Haim Tour.

“Licorice Pizza” is currently playing in select theaters and is expanding nationwide on Christmas Day.