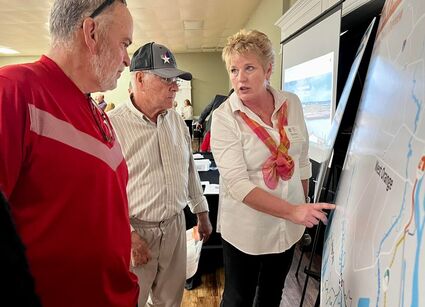 Construction of the flood protection system for Orange County will create 5,000 to 10,000 jobs, with the project expected to include moving more than five million cubic feet of earth, enough to fill the Astrodome three times.

The money is now in place and construction should start in 2024. The whole project should be finished in four years.

In 2018, Congress approved federal funds for the Orange County system, which will cost approximately $2.39 billion. On Friday, the Gulf Coast Protection District, a specially formed state district, signed an agreement to pay the 35% game for the federal 65%. Precinct 3 County Commissioner Kirk Roccaforte is a member of the Orange County Board of Directors.

The Protection District is using Texas money that voters in a 2019 state constitutional amendment election agreed to withdraw from state ‘rainy day’ savings to help with protection against floods. The protection district will then oversee the operations of the flood protection system, which will include seven or eight pumping stations, as well as numerous gates.

Representatives of the US Army Corps of Engineers gave the information on April 28 at a public meeting in Orange to show the draft and operational plans. The body and local officials held three of the briefings, and County Judge John Gothia estimated that a total of about 200 citizens attended.

The jobs created will include drivers and crews for the hundreds of dump trucks that will be needed. The Corps of Engineers hopes to purchase land in the county. Roads damaged by construction will be repaired upon completion.

Construction is expected to begin in 2024 and be completed in 2028. Current plans call for approximately 15 miles of earthen levee, mostly in swampy areas, plus an additional 10 feet of concrete levee. The dyke area will be in Orange along the Sabine River. The levees will begin in the Bessie Heights area outside of Bridge City on the west side of the county and follow the south side of the county.

The south side includes the large complex of petrochemical plants along FM 1006, the road locally known as “Chemical Road”. Gothia said the system will help protect the hundreds of factory jobs and the families those jobs support.

The Orange County Drainage District worked with the Corps of Engineers on the project. At the Orange briefing, drainage district manager Don Carona said most of the earthen levees were in marshy areas and not on private property.

Current plans call for the area of ​​the town of Orange along the Sabine River with a concrete dyke to be constructed in the river adjacent to the banks. Spaces with gates will be created for shipyards along the river.

The concrete seawall will be 11 to 15 feet high around downtown Orange, depending on the sea level of the land at the time of its construction. Carona said the design of the wall is like a “thread in a needle” around the river.

Corps officials said the wall could include a walkway or area so people can still see the Sabine. Some areas of the country have had sections of light walls that provide a view.

The body is adjusting its plans to keep the Orange Boat Ramp area off Simmons Drive open for recreation. Currently the boat launch area will be on the river side of the sea wall with a gate that can be closed and topped off the wall when needed.

The flood protection system will run north along the Sabine River area and terminate at Interstate 10. Orange City Councilwoman Terrie Salter was at the information meeting to help allow the restaurant and at the Blue Bird Fish Camp store to continue their operations.

Several valves are included in the project with the main ones at Cow Bayou and Adams Bayou. Other gates will be across roads and railroads.

A call for local subcontractors has already been launched with scheduled information meetings.

The concept for the flood protection system began after Hurricane Ike in September 2008 sent storm surge into the Gulf of Mexico. The wave inundated the southern part of Orange County.

Then County Economic Development Director Bobby Fillyaw, in conjunction with the Orange County Court of Commissioners, secured grants for a study of the countywide flood protection system. The study by engineers Carroll and Blackman de Beaumont was presented in September 2012. These plans were submitted to the US Army Corps of Engineers in Galveston in 2013.

The corps of engineers used information from Carroll and Blackman to make preliminary designs for an Orange County protection system and the plans were presented to the public at the OC Expo Center in April 2016.

The body completed its feasibility study of the project in 2018, and Congress approved funding in February 2018. The Texas Legislature staged the state’s constitutional election to help pay for the flood protection system with l November 2019 election. In February 2020, the U.S. Army Corps of Engineers announced that Stantec and Jacobs would design the Orange County Protective System.