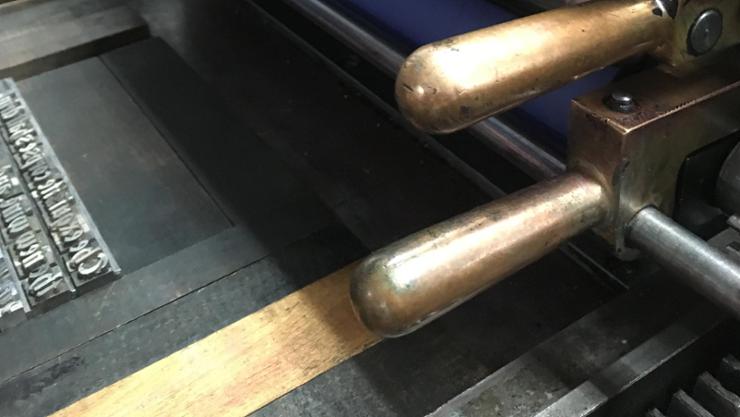 Hamilton’s Letterpress Studio produces more than brochures, posters and books. The studio hopes to reach beyond its cement lining in Dunham’s basement and campus classrooms.

The studio grew out of a student’s interest in 1967. However, by the time visiting assistant professor of literature Andrew Rippeon arrived, the mid-century press had been damaged from years of storage in the basement of Root Hall.

Over the past three years, Rippeon has collected material to restore damaged typography. Since then he has restored the original typography and added two more typography machines.

The Letterpress Studio is witness to both physical and intellectual expansion.

One of the courses Rippeon is teaching this semester is Unpacking My Library. Rippeon describes this course as “a critical and creative exploration of the book” as it involves frequent visits to the special collections of the Daniel Burke Library, Wellin, Scene Shop and Letterpress Studio.

“My research focuses on the small contemporary press of the 20th century or on avant-garde poets. Because the commercial market for experimental poetry is very small, these avant-garde poets have also been editors and producers of text,” he explained. “In that sense, it’s quite instructive, I think, to involve the students in the process that the writers they might be studying had also been involved.”

The professor by day, typographer by night attributes this to the College’s natural approach to “experimental learning,” a product of its commitment to an open curriculum.

Although letterpress printing is essentially an artistic process, it is possible to develop a relationship with math and science-oriented students who might find its rational requirement intriguing.

“For students in the class who may not be Literature majors, it’s a way to engage that manual, material, process-oriented, problem-solving side of the brain that may be more familiar to a scientist or an economist,” Rippeon said. . “I hope,” he adds, “that this problem-solving approach later trickles down to their literary analysis or writing practice.”

For the future, Rippeon would like to organize summer research and independent studies in space. He also hopes to offer one-semester credit courses and collaborate with Christian Goodwillie, Director and Curator of Special Collections and Archives and Lecturer in History on the design and construction of a working replica of a 19and century wooden “common press” for historical demonstrations and workshops.

There are plenty of opportunities for the Letterpress Studio, which is already home to the Letterpress Club and prints the honor code with freshmen on the Exploration Adventure (XA) trip.

The best outcome is to engage with students who have never worked in the studio before, and there are plenty of them.