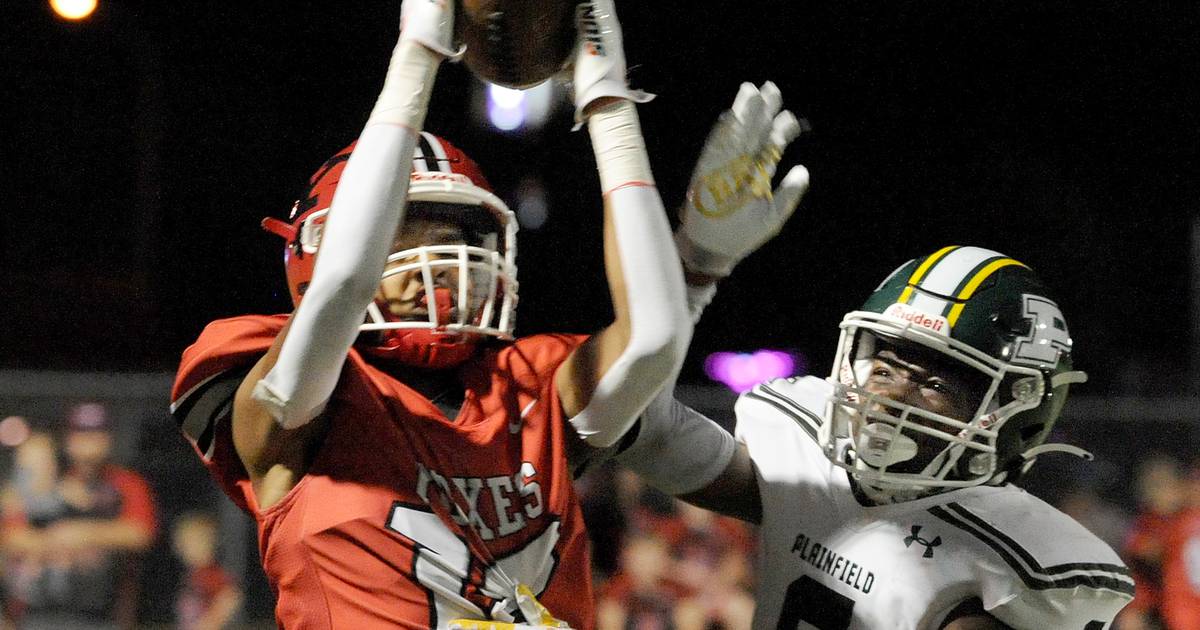 Isaiah Brown has a trait that seems like a job requirement for someone who catches a dizzying pop with 11 angry opponents charging at you.

It’s an attitude that Yorkville coach Dan McGuire has noticed and loves about Brown, his second punt returner and receiver. McGuire was quick to point out Brown’s contributions in the return game following the Foxes’ 40-20 win over Plainfield East last week.

“He’s just a fearless kid,” McGuire said. “We’ve had kids who have been able to return punts in the past, it’s kind of like ‘hey you’re a running back, go catch some punts’. It’s one of the first time since I’ve been coaching here that we’ve almost had a real punt returner.

He’s an easily overlooked player, but no less valuable to a team trying to maintain a positive position on the pitch. Brown in four games had seven punt returns for 79 yards, averaging 11.3 yards. Brown’s comebacks and Yorkville’s incredible defense helped give the Foxes prime position on the field on several occasions.

“He’s got sure hands and he’s confident,” McGuire said. “His returning ability helped keep the pitch balanced. Often, as a team, you’re just happy to get the ball back. When he can send it back 10-15 yards and not let it bounce 15 yards, that’s a pretty big change in position on the pitch. We’ve been talking about it for 2-3 years, but having a child like Isaiah who isn’t afraid of anything helps. It’s not easy to stay out there with 11 guys attacking you looking at the sky.

Brown’s value to the Foxes, however, went beyond his returning skills. Brown has a team record 11 catches for 121 yards and has demonstrated good body and hand control on deep balls. Brown is one of the few young Yorkville players given the chance to contribute. Junior Dominick Coronado has seven catches and two touchdowns, junior Josh Gettemy has seven catches and went for over 100 yards last week with injured Gio Zeman and second Dyllan Malone has five catches.

Yorkville, like a number of teams, opted to rotate quarterbacks instead of settling for a starter and rolling with him.

But the Foxes do it a little differently.

Instead of putting out junior Michael Dopart and senior Kyle Stevens series by series, it’s not unusual for both quarterbacks to come in and out in one practice. This is also by design.

“The way we approach it is purely through staff groupings,” McGuire said. “A lot of people do the playoff thing. I don’t want the kids to think I’m taking them out because they did something wrong, and I don’t want them looking over their shoulder. I want children to play with confidence.

He will get his biggest test on Friday against fellow undefeated Plainfield North, who has given up just 35 points in four games.

“At the start of the year, I felt like we had two strong quarterbacks, but I also didn’t want to create a situation of animosity towards each other,” McGuire said. “We go with the training that gives us the best chance to get. a first down. Hopefully being consistent with our children builds trust and selflessness.

Wolves this season are averaging 200.5 rushing yards per game. Senior quarterback Tre Jones, while throwing for a modest 304 yards and three touchdowns so far, has completed 60.8% of his passes for a quarterback rating of 122.4 (over 100 is considered as great).

Even more impressively, Oswego East has been able to maintain a level of consistency with their top two running backs, Oshobi Odior and Tyler Bibbs, over the past two weeks. Oswego East coach Tyson LeBlanc expects at least one player to return this week.

“We did a really good job of running the ball,” LeBlanc said. “When you get to that time of year, you have to be able to run the ball. We basically do that with our third and fourth running backs. It’s a credit to our offensive line. It’s still a relatively young.

LeBlanc said his two returning starters, 6-foot-3, 280-pound Orlando Kye Woodhouse and 6-foot-4, 280-pound Tim Savchuk, have been playing well. Returning starting center Marco Bellanca has yet to play this season due to injury, but William Chen, who is 5-foot-8 and 185 pounds, has held his own despite being nearly 100 pounds lighter than Bellanca. Aiden Moriarty, at 6-foot-4, 225 pounds, also helped block at fullback H.

“What Will lacks in size he makes up for by being a tough kid. He’s a wrestler,” LeBlanc said. “He has good feet, runs well. Marco trained. I don’t know if he’ll be back this week or next week but it’s a situation that Will played well, to supplant him in the center, I don’t know.

LeBlanc feels good about his team, as it becomes healthy before divisional play. But he’s wary of a 1-3 West Aurora team in reunion week.

“They are a dangerous team,” he said. “I warned our guys not to neglect them. You get nervous about these weeks. Guys look at the records, look ahead.

Oswego takes care of business before the “grind”

Oswego, after an 0-2 start, did the right thing in the Prairie Southwest Conference crossover games. After a Week 3 win over Romeoville, the Panthers broke their record even with a 56-7 win over Joliet Central last Thursday. Oswego has also been able to rest some kids over the past two weeks, with the majority of his starters only playing the first half of the two weeks.

“Starting 0-2 is all you can do, take it a week at a time. Looking at these crossovers, you’re hoping to get two wins and then set yourself up for the grind,” the coach said. ‘Oswego, Brian Cooney “I think the overall execution was good, the responsibility of the assignments and some of the complex and complicated things that we try to convey to the children.”

The first player in the SPC West division is Minooka, who himself rebounded from a Week 1 loss to Bolingbrook with three straight wins over opponents SPC East.

“It’s Minooka. Historically they’re big, they never skip leg day, they never have,” Cooney said. “They still have a kid who can stretch the pitch vertically. They do a good job of going side to side and can come up with power training to build muscle. Defensively a slightly different scheme but just like us, not a lot of smoke and mirrors. We will have to play well on both sides of the ball to come out on top. I think the guys are up for the challenge.

It’s no secret that Waleed Johnson is the centerpiece of Plano’s offense. The speedy junior has already racked up 680 yards and eight touchdowns in four games. If teams didn’t know Johnson before this season, they know now.

But if Plano is to have sustained success offensively, however, it will take more than the spectacle of Waleed Johnson. Defenses like La Salle-Peru’s last Friday will dedicate additional resources to keep Johnson out of open space.

Junior Armando Martinez, who took over for injured senior Samuel Sifuentes at quarterback, completed 7 of 15 passes for 68 yards and a touchdown to Nick Serio last Friday. Five of those bullets went to Thomas Harding, who eventually left the game with an injury. Plano in the fourth quarter fielded Johnson on the outside and he caught a 17-yard pass. The Reapers could rule out Johnson more often when Carnell Walls returns from a shoulder injury this week or next.

“We talked about how we can use Waleed out of the backfield,” Ponx said. “Losing Carnell hurt because he was our second-best full-back and then we distributed Waleed like we did against Manteno.”

Ponx said the Reapers will have to hit big plays and score this Friday at Richmond-Burton, forcing the Rockets to throw some. The Rockets threw the ball 16 times in a 33-26 win over Normal West last Saturday, but they had attempted just 14 passes in their first three games.

Richmond-Burton, ranked No. 4 in Class 4A, has won 36 of its last 37 games, but Plano can draw some confidence from facing the Rockets in a 21-14 loss last season.

“We have to be able to throw the ball and get big plays,” Ponx said. “If we can’t hit big plays and score and force them to throw a little, it’s going to be a long night.”