How fake IDs are created for movie and TV characters 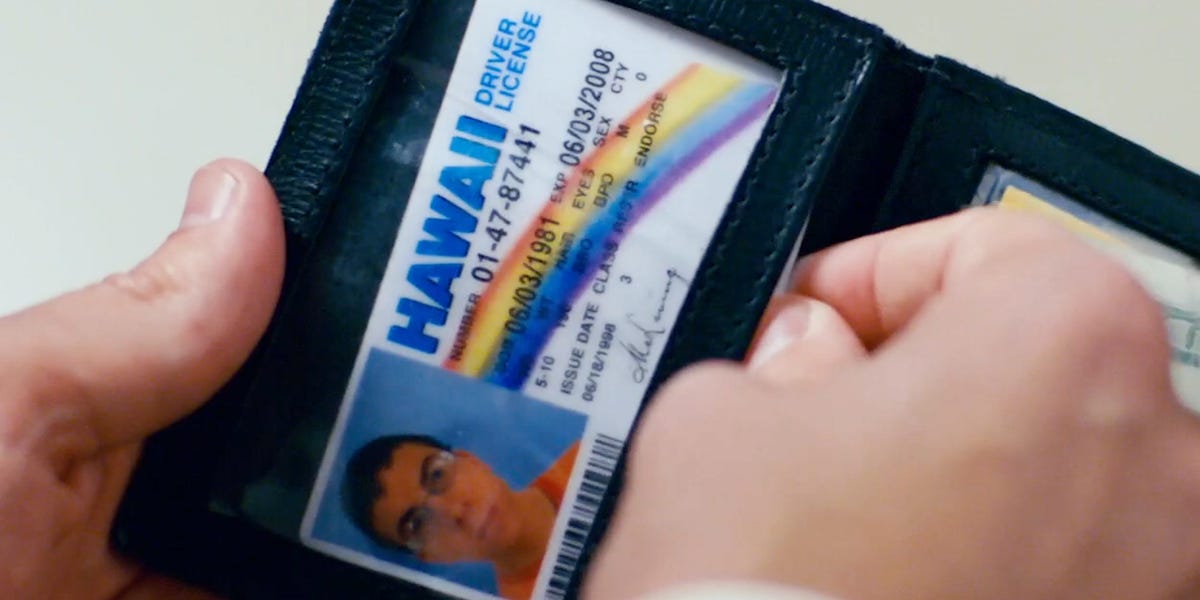 Here is a transcript of the video:

Officer Michaels: Can I see your ID?

McLovin’: Yes, I think I have.

Narrator: This is perhaps the most famous fake ID in all of the movies – so famous that someone tried to use it as a fake ID in real life. That’s why prop makers need to be extra careful when making fake IDs for movies and TV shows. Too well, and they could be in legal trouble. We stopped by The Hand Prop Room in LA, which created the McLovin ID, and graphic prop artist Ross MacDonald’s studio to see how Hollywood crafts its prop IDs.

When creating fake IDs for production, agencies may limit their clients to major studios. It’s the accessory maker’s job to make these identifiers look as real on screen as possible without crossing any legal gray areas. Like with this New Mexico driver’s license, which The Hand Prop Room did for “Black Widow.” Scarlett Johansson’s photo has been swapped for a stock photo, and the hologram, which in real IDs would be 3D, is actually 2D.

Jacob Kubon: There are lots of tricks you can use in the graphic itself to make it look like it catches the light and has a bit of shine.

Narrator: For a special close-up, they can physically simulate the hologram using a silk screen and iridescent powders mixed with transparent ink. Luckily, according to graphic prop artists Ross MacDonald, simplifying things like holograms and shadow images can make the ID look better on screen, because it won’t be so stuffed with small details.

Ross: The golden rule is more convincing than precise.

Narrator: To nail the aesthetic, accessory makers often focus on the sparkle of the ID.

Jacob: A lot of driver’s licenses that you see, especially now, have that kind of matte, but also a bit shiny. And that’s what we’re going to get from the rolling process.

Narrator: The lamination will also give it the weight of an actual driver’s license, so when the actor holds the card, it not only looks, but looks like the real deal. For projects that require close-ups, they use this old-fashioned embossing machine to make sure the lighting reflects correctly on the numbers on the card. And for special forms of identification, like those of the US military, accessory makers might have to imitate metal chips. For these, props can make fake vinyl chips to stick on the ID card, or they can print it on a card that already has the fake chip embedded in it. But specialized IDs pose another problem.

Ross: They are often very, very simple. Military IDs, police IDs, even FBI IDs, they’re supposed to be scrutinized very closely. But on a TV screen, they could kind of hold it up, and we’re watching them from eight feet away.

Narrator: As a prop, perhaps you could spice things up with a flashy gold badge or that kind of giant FBI logo you often see popping up on shows and movies.

Ross: And often, the frame of reference for viewers is other shows. The “X-Files” is the one you see copied a lot.

Narrator: The ID should also play well in the scene.

Narrator: Like the 1920s one Ross did for a Prohibition agent in “Boardwalk Empire.” He first produced an ID true to what officers were wearing at the time. But after a few rehearsals, the filmmakers asked him to add space for a badge inside, so the agents had something to flash.

Things get more complicated when it comes to passports, which are generally much more difficult to forge than identity cards due to all the details involved on multiple pages. To create a current US passport, The Hand Prop Room must print and cut the pages, make a clear overlay on the photo page, and screen print the cover to give it that authentic shine. After sewing the pages together, the prop makers assemble the passport and make a final cut. To avoid legal problems, prop houses sometimes deliberately alter the look, like on this Dutch passport for “Madame Secretary”. The show’s legal team asked The Hand Prop Room to make the passport less accurate by revamping the layout and changing the color scheme.

With historical ids, legality is not an issue, so prop artists can become much more authentic on period shows. That’s what Ross did when he created this 1920s passport for Steve Buscemi’s character in “Boardwalk Empire.”

Narrator: Ross first had to track down a 1921 passport to use as a template, then digitally erase the existing information and recreate the background pattern so he could go in and write the new material over it. He had to find the red legal seal in Europe, since the US no longer uses that type, then engrave the seal and photo, fabricate, print and punch the adhesive stamps, and recreate all the rubber stamps to match those of the period. He was lucky to have an example to work on. It can be much more difficult to find reference documents for more mundane forms of identification, such as a driver’s license from a specific year and state.

Ross: Especially from before 1980, there’s no reason for anyone to digitize this.

Narrator: For this one, the closest reference Ross could find was a photo of a 1923 New Jersey license. He scanned it and built all this type on top of it in the computer to recreate a version high resolution. Since this material is so hard to find, Ross keeps files of all the reference material he has compiled across the more than 100 films he has worked on. When working on a pixelated photo like this, the hard part is recreating the actual document part of the ID. Ross needs to identify all the typefaces, so he places different fonts over the original text to find the ones that match. It is useful to have a library of old fonts used in different periods.

Ross: You can date this particular cut of this typeface between 1815 and around 1825.

Narrator: Sometimes, however, you have to recreate an entire alphabet. For this 1960 passport made for a never-before-seen project, Jacob scanned six or seven real passports from the era to capture every letter of the alphabet, then cleaned up the letters and vectorized them to create an all-new font just for this particular year of passports. His team also had to recreate the blue-red effect of this special stamp from the 1960s by hand. Replicating the look of old printing tools requires creative problem solving. The Hand Prop Room used printing tricks on this 1967 California license for the character Chris Pine in “I Am the Night” to make the text look like it came from a typewriter. Whenever possible, it helps to use the real deal. Ross prints all sorts of seals and fonts on his old-fashioned letterpress, which is operated by a foot pedal. Then there is the question of what to write. Ross created these Illinois licenses for a scene where the police raid a crowded speakeasy, which meant a bunch of background characters had to show ID. So Ross had to make up a bunch of names, addresses, exact heights, weights, etc.

Ross: After about the 10th, you think to yourself, have I ever used John Smith?

Ross: This guy is Aloysius Sawicki.

Narrator: And for the main characters, all this information must be confirmed with the production. These are passport instructions for Owen Sleater in “Boardwalk Empire”, providing details such as the character’s full name and hair color, but omitting other pertinent information.

Ross: Many other documents require things like dates of birth. You know, the writers never even considered the character’s age or birthday.

Narrator: Ultimately, however, designers like Ross and Jacob don’t always know how the prop will be used when they create it. Sometimes these props are highlighted in action, but sometimes you do a lot of research and work for an ID that can only be displayed on screen for a fraction of a second.

Ross: So incredibly elaborate prop, which we see in the episode like this. He just passes it on the counter.

There were no pictures of criminals on wanted posters in the 19th century. It’s something that comes from cinema. Most people didn’t have pictures of themselves.