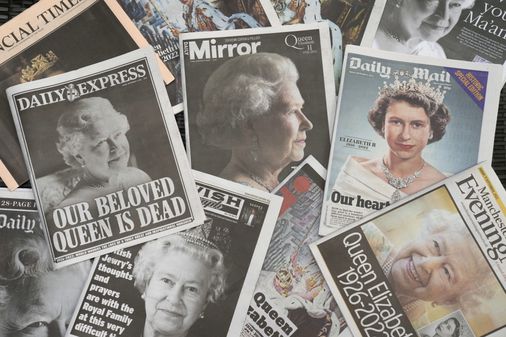 After the news of Queen Elizabeth II’s death sent shockwaves around the world on Thursday, prompting an outpouring of emotional responses, publications around the world commemorated her decades-long reign with special front-page tributes.

From small towns and villages in England to countries like Japan and France, newspapers and magazines have recalled the Queen’s dedication to a lifetime of service.

Although the pages spanned continents, there were some similarities. Many used a portrait of the Queen in full regalia at her coronation, or displayed an older image of her after years of experience on the throne. Others, meanwhile, showed her smiling or gazing solemnly into the distance, without the usual characteristics of royalty.

Displays highlighted her dedication to Britain and her Commonwealth, with titles like ‘A Life of Service’, ‘The Queen and Spirit of Britain’ and ‘A Pillar of Duty and devotion” splashed on the pages.

The Daily Mirror had only two words: “Thank you”.

Britain is currently in mourning as the country prepares for a new era under King Charles III. On Friday, people around the world continued to remember the Queen as the monarchy entered its next stage.

Here’s a look at how some of the front pages honored Britain’s longest-serving monarch.

A Tribute to the Queen is the full front page story on this morning’s cover @HoustonChron.

A demonstration of the importance of his reign… not just in the UK, but around the world, here in Texas. pic.twitter.com/N4vRSSgDab

A day that we knew one day we had to cover. Today’s front page of The News. The photo is from Her Majesty’s visit to HMS Queen Elizabeth in Portsmouth last year. pic.twitter.com/P2c9bevCPP

Tribute on the front page (and many inside pages) of NI’s leading nationalist newspaper today.
The first visit by a reigning British monarch since Queen Victoria, when all of Ireland was then part of the United Kingdom. pic.twitter.com/N2MuD1Fd3L

Media Web homepages are the contemporary equivalent of the front page of newspapers.

This is what the homepages of the BBC, CNN, Guardian and New York Times currently look like when Queen Elizabeth II died. pic.twitter.com/4lJsiZ93MA