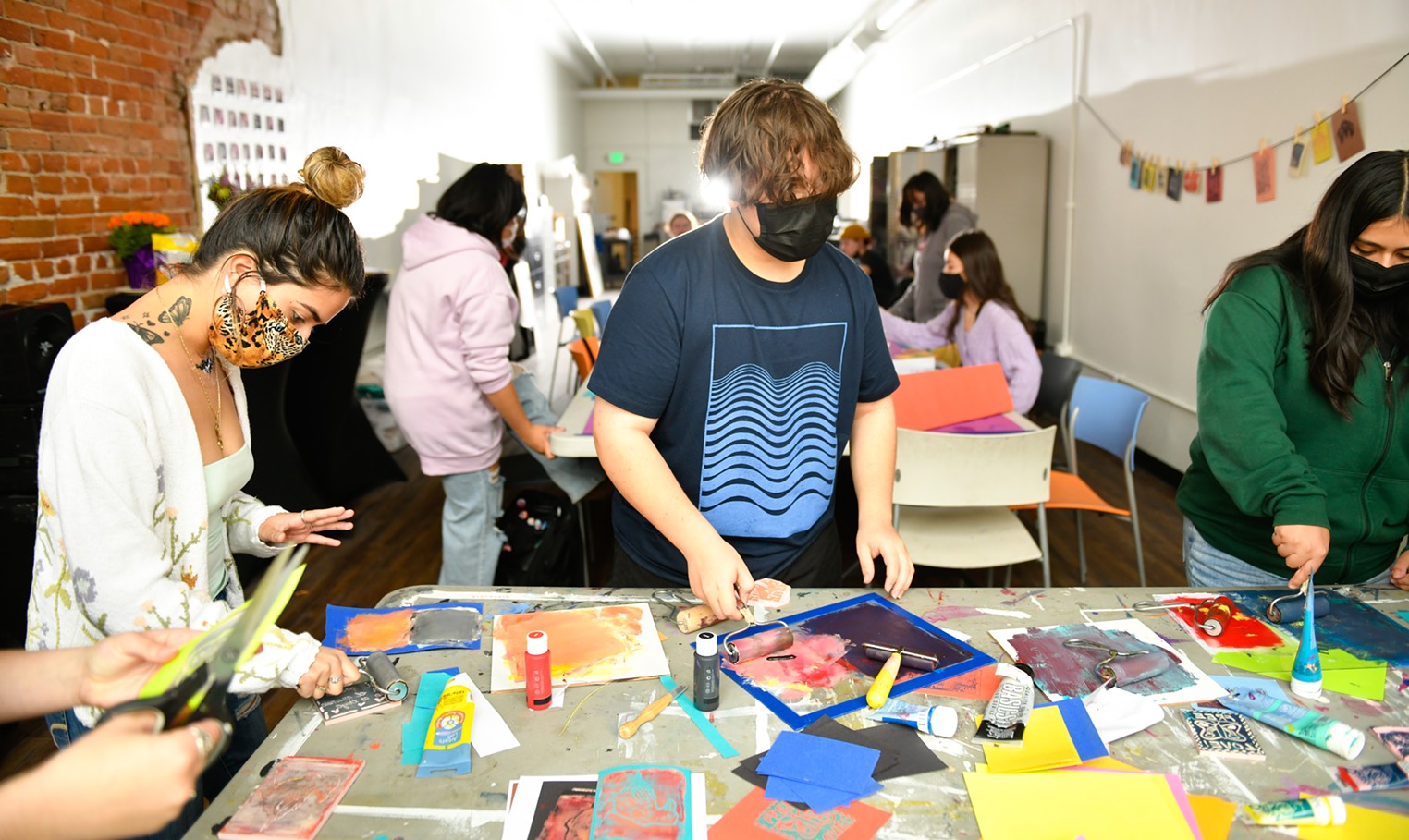 PlatteForum’s ArtLab program offers studio internships for select Denver-area high school students to develop their artistic sensibilities through workshops and projects with professional artists. The program encourages interns to explore social issues through works of art; the most recent internships will culminate in the exhibition Hear our cries, which is now visible until Friday, March 18.

Gun violence, climate change and persecution of identity are among the issues depicted through the thirty rooms. Topics are decided by the ArtLab 2021 class, which includes thirty teenagers between the ages of fourteen and eighteen. Ai, 17, says the interns researched their subjects by talking to local political activists, other artists and members of the civil service, such as the police.

Both works by 16-year-old Nevaeh focus on gun violence and its identity. “And Now They Can’t” was painted in two weeks to channel anger over his concerns about the ignorance of gun violence. It’s a problem she says ‘regularly leads to children dying’ in schools across the country. The piece is also meant to comfort his younger sister, making her feel less alone in the face of such a struggle, while simultaneously unnerving those who are old enough to vote to use their political voice.

Hear our cries sees such stories behind all the works on display. The majority of fundraising is done by those who believe they have no say in the political system. Ultimately, the exhibition is a battle cry, a call for help and a manifesto of autonomy.

“Our generation has a lot to say,” says Ai. “It’s important to see how teenagers view the world today compared to our parents.”

Ai’s “Rainbow Flow” centers on her immigration to the United States as a child. The multimedia work brings together a fairy tale, a promised land of brightly colored grass, miniature houses, oversized furniture and an abundance of plants and animals.

Nevaeh’s expression of her identity involved “Catholic trauma” about the repression of her sexuality while in a church-run school. Inspired by a traditional Mexican ofrenda, “Stepping Out of the Box” depicts a disembodied hand adorned with crosses clutching a lantern. It’s something she wouldn’t have had the courage to create outside of ArtLab, or before transferring to a public high school.

“I’m very vocal at ArtLab, and I’m not usually like that outside of ArtLab,” she explains. “[Seeing] people who are like me are open about their sexuality, their experiences, their race — [it] made me realize that I was not alone. And they make art.”

But more than anything, Nevaeh’s most inspiring takeaways from ArtLab and Hear our cries was the fact that permission is not needed to talk about what matters to her.

“Fractured Perceptions” and “Distortion”, both by David.

Seventeen-year-old David understands this statement better than anyone. He orchestrated a large-scale collaborative piece within the class to encapsulate identity, which felt like a better encapsulation of the original theme of LGBTQ+ issues as well as other universal self topics. A torso, arms, hands, lungs and other body parts are displayed throughout the gallery, each themed around a trainee’s struggle with their identity.

Both of David’s paintings focus on the head – a focal point of people’s self-perception. In ‘Fractured Perceptions’ and ‘Distortion’ heads are broken into small pieces, the latter being a startlingly realistic self-portrait. The portrait was where David found most of his resources over the past few months, in part a sign of newfound strength.

“I was given a lot of freedom to express myself, to become more confident in who I am,” he says of his ArtLab experience.

David prides himself on the class and political nature of his show. But he is also disappointed that such topics have even become political, especially in recent years. Still, he hopes this collection of “multiple perspectives” will underscore for viewers the importance of listening to one another.

“Young people should be listened to more. What the younger generations are saying should not be ignored,” says David, adding that visitors should “make an effort to understand and understand. This is what our future looks like, what our present looks like “.

Hear our cries, on view through Friday, March 18 at PlatteForum, 2700 Arapahoe Street, Unit 102. For more information, visit the PlatteForum website.