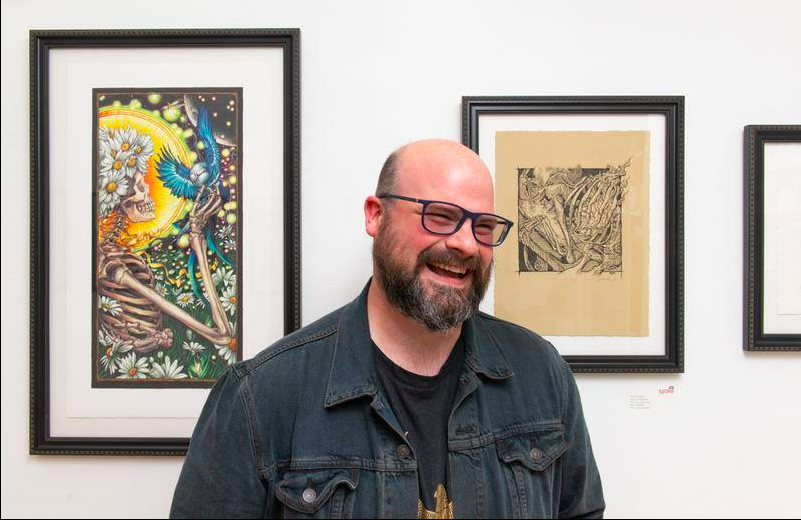 For concert poster collectors, perhaps no artist has influenced the culture of the medium as much as Alton Kelley. The Connecticut-born artist, who worked for a time as a welder at Sikorsky in Stratford, helped define the visual aesthetic of the 1960s counterculture with his psychedelic-inspired posters and artwork .

At the time, Kelley’s work with fellow artist Stanley Mousse became synonymous with the Haight-Ashbury neighborhood of San Francisco and his styles would be consistently employed by musicians like Jimi Hendrix, Big Brother and the Holding Company and the Grateful Dead, who he worked extensively with – designing the cover for the band’s 1971 self-titled live album as well as the oft-reproduced concert poster for the band’s September 1966 shows at the Avalon Ballroom in San Francisco.

Kelley’s artistic influence extended to a whole legion of legendary modern concert poster designers, including Emek Golan and Chuck Sperry. Although Kelley has since passed away, one concert poster artist from Connecticut keeps alive the ingenuity of New England-raised concert artists: AJ Masthay.

Masthay is a lifelong Connecticut resident who operates out of his workshop in West Hartford called “The Furnace”. He’s worked with some of the biggest bands on tour, including Black Sabbath, Grateful Dead, Foo Fighters and Dead & Company, for whom he recently produced 2022 tour posters. Plus, a one-of-a-kind guitar designed by Masthay and performed live by Bob Weir of Dead & Company on its last release fetched $300,000 at a charity auction, with proceeds going to nonprofit HeadCount and the environmental organization. REVERB.

For Masthay, seeing Weir perform charity guitar with his design on their last show at Citi Field in New York was “surreal to say the least.”

Fans will have the chance to view Masthay’s artwork during an open house at his West Hartford studio on November 5 – the first since 2019. There, Masthay will sell new artwork, customize prints and give demonstrations on the way his printing press works.

Graduating from Hartford Art School in 1997 with a degree in printmaking, it wasn’t until 2001 that Masthay set up his own typography studio and began testing the waters of the concert poster scene.

“I have been an artist all my life. My parents have little drawings I did in kindergarten and stuff like that,” Masthay said. “It really clicked for me back in the late 90s, 99 or so, seeing one of Jim Pollock’s plays on a Phish show and being like, ‘Wow, that’s a real impression. It’s not a digital thing. I am an engraver. I love music. Hmm, maybe that could be something.

Masthay had been in the jam band scene since the early 90s when he started following the Grateful Dead in 1992. “I pretty much spent all my money my first semester of freshman going to see the dead “, did he declare.

His love for jam bands would continue with the band Phish, which he saw about 240 times. Masthay said he will be selling prints on what’s called “Shakedown Street,” a place where vendors sell everything from grilled cheeses to necklaces outside of the concert. And since Masthay sold posters, he collected just as many.

“I collected concert posters before I got into it. I was grabbing old Dead posters and more specifically Phish stuff back in the day. Back then, in the mid to late 90s, you weren’t guaranteed a show every night. This was before the internet, so there was no posting posters online or anything like that,” Masthay said. “You had to arrive and get there early, and we would literally run to the merchandising tables to see if there was even an impression and if there was, it was like winning the lottery.”

As the appetite for concert posters grew, bands began to take notice and employed different artists to design tour posters and, in some cases, individual posters for specific shows.

Masthay said things really picked up for him after he was asked to design posters for Fare Thee Well, the final series of shows by members of the Grateful Dead in 2015. Since then, Masthay has been printing thousands of posters a year ever since. his West Hartford studio. for legendary musicians and upcoming artists.

The artist describes his medium of relief poster printing as “analog” and “old school”.

AJ Masthay can be followed on Instagram and Facebook, where updates are often shared regarding upcoming concert lineups.

“It’s literally me carving sheets of linoleum and inking them. The best way to describe it is like a giant rubber stamp on steroids,” Masthay said. “You’re talking about two weeks of printing and carving , not to mention the design time and original drawings. It’s very time consuming [and] labor intensive, but the results are unique and I think they speak for themselves. »

The relief printing process involves a reduction print in which Masthay has to “re-engrave the plate several times”. Masthay explained that as the editing of a given poster progresses, he actually destroys the plate with which he presses the poster. This removes the ability to return to the plate to add new items or attempt to reprint the poster.

One of Masthay’s most recent pieces, a limited-edition poster for The Black Keys show in Las Vegas, involved him sculpting each plate, running the prints through the press, then letting the posters dry for a while. at night – and that’s for each color out of the seven -color poster. Fortunately for this series, the poster was limited to 250 copies. Some posters, notably for Dead & Company, can go up to 15,000 prints.

ThougRe-Submit to Writingh Masthay specializes in analog media, he said editions of this size require him to use digital archival prints. However, the ability to work with digital media allows Masthay to do more artistically with his ideas and let them breathe as he designs them.

Speaking of poster design, Masthay said it was both his favorite and least favorite aspect of creating concert posters. “I often tell my wife that I don’t know what it’s like to give birth, but sometimes I compare concept development to giving birth. It can be incredibly painful and taxing at times and at other times it becomes very easy,” Masthay said. “Most of the time it’s painful.”

AJ Masthay can be followed on Instagram and Facebook, where updates are often shared regarding upcoming concert lineups.