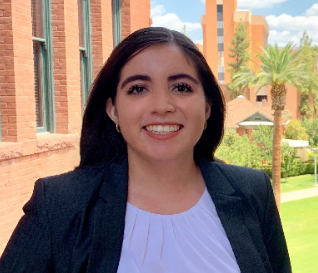 Editor’s note: This story is part of a series of profiles of notable Spring 2022 graduates.

Valeria Valdes Cosillion’s earliest memory of falling in love with the arts dates back to age 3 when she attended her uncle’s performance in “Cats” for her local university in Guadalajara, Mexico.

“I appreciated what you could do with the medium that transported you to a whole new world and what that entailed, but I knew I couldn’t be an actress because I had so much stage fright growing up,” she said. “Then I started looking behind the scenes of the movie, and I really love how you can put multiple things together into something really magical and the limitless possibilities.”

Her long-term goal is to work in the production management of animated feature films.

When she graduates this spring, she will earn a bachelor’s degree in film and media production from the Sidney Poitier New American Film School and a diploma in business management from the WP Carey School of Business.

“My mother was a business administration student,” she said. “She was always talking to me about her experiences and how it was like the mystery side of HR, and I always appreciated that somehow. I thought I could do both, so I did.

She is also a Barrett, the Specialized College student and doing a minor in international trade. She was awarded the New American University Fellowship to be a National Hispanic Scholar and earned several different scholarships from the WP Carey School.

Here, she answers some questions about her time at ASU.

Question: What did you learn at ASU – in class or otherwise – that surprised you or changed your perspective?

To respond: You feel like you’re going in one direction, but then you hit things and pivot, and I think that’s what I appreciate the most about my time at ASU – having all these different possibilities and having the freedom to try new things. As I leave with my cohort and other ASU alumni who have learned from their experiences, I keep this mindset open to being okay with the unexpected, because you might not know not where you’re going and that’s OK. There’s a pressure to know, as soon as you graduate, where you’re going and what job you’re getting, but I feel good not knowing, because I’ve done so many things, and what college has The takeaway is to make it a meaningful work to live on. As long as you keep moving forward, keep learning, you will be where you want to be.

Q: Which teacher taught you the most important lesson at ASU?

A: Without a doubt, Dr. Jason Scott was the biggest influence and impacted me the most. TheyScott prefers the use of neutral pronouns. are very eloquent and really cared about the students. They ensure that the film school lives up to its mission statement, making the school a more diverse place where everyone can create what they want, without limiting people’s creativity. I had the good fortune to work with them on multiple occasions, and each time we spoke, they always had a deeper insight into how I could broaden my perspective on things.

I feel like it’s hard to identify one thing because there were so many. It’s really inspiring to see how they cultivate a good environment not only for students to be comfortable, but also to work well with other teachers. I feel like they really shaped my idea of ​​what a good leader is and how to take care of the people around you. I know I’ve struggled with taking care of myself and finding work-life balance, and seeing other people in leadership positions and thinking about how they might live that has really learned to care. These are some of the good lessons I learned from them. I really admire them.

Q: What is the best advice you would give to those still in school?

A: Get involved on campus, take on these leadership roles and attend club meetings. I think that’s the main reason my college experience was more meaningful than my high school experience. In high school I always attended class, focused on grades, hung out with friends once in a while, but in college I made an effort. I was like, ‘OK, I’m going to get involved, I’m going to have these leadership positions’, and I think that’s what made this experience the most meaningful, because I got to meet people. It was by getting involved in clubs that I connected. I was able to get on set and learn earlier what it was like to work in a film.

Q: Where was your favorite place on campus, whether to study, meet friends or just think about life?

A: As I am also at Barrett, we have a Leader’s Academy lounge at McCord Hall. It’s nice and private. It’s one of the places I really like to go.

Q: What are your plans after graduation?

A: My ultimate long-term career goal is to work in the production management of animated feature films. I realized that I love the lifestyle and what it’s like to do an animated feature film versus live action, and also I’ve been a big fan of animation for a long time, d first with Disney animated features growing up, and I was big on anime. I also noticed it was easier to dub in Spanish – you wouldn’t get the weird lip disjunction, so it didn’t really drag you out of the moment like it sometimes did with the action live. My mom was not fluent in English so it was always nice to watch these movies with her and we were able to watch them in Spanish. Because of that, I feel like I turned to animation, and I’ve been part of two leadership programs involving animation where I learned what production management was like, so I realized that was really what I wanted to do.

Q: If someone gave you $40 million to solve a problem on our planet, what would you tackle?

A: There’s so many things, but I feel like the current thing, just through what I’ve been involved in, is nurturing those countries that need a lot of support. I participated in Feed My Starving Children, and just seeing the small impact of making sure someone has enough nutrition and food to get through their day and make new changes is, in my opinion, the one of the most useful things. So I feel like if I have that amount of money, that’s what I want to focus on – to be able to support those organizations that already have connections to continue to do their operations.