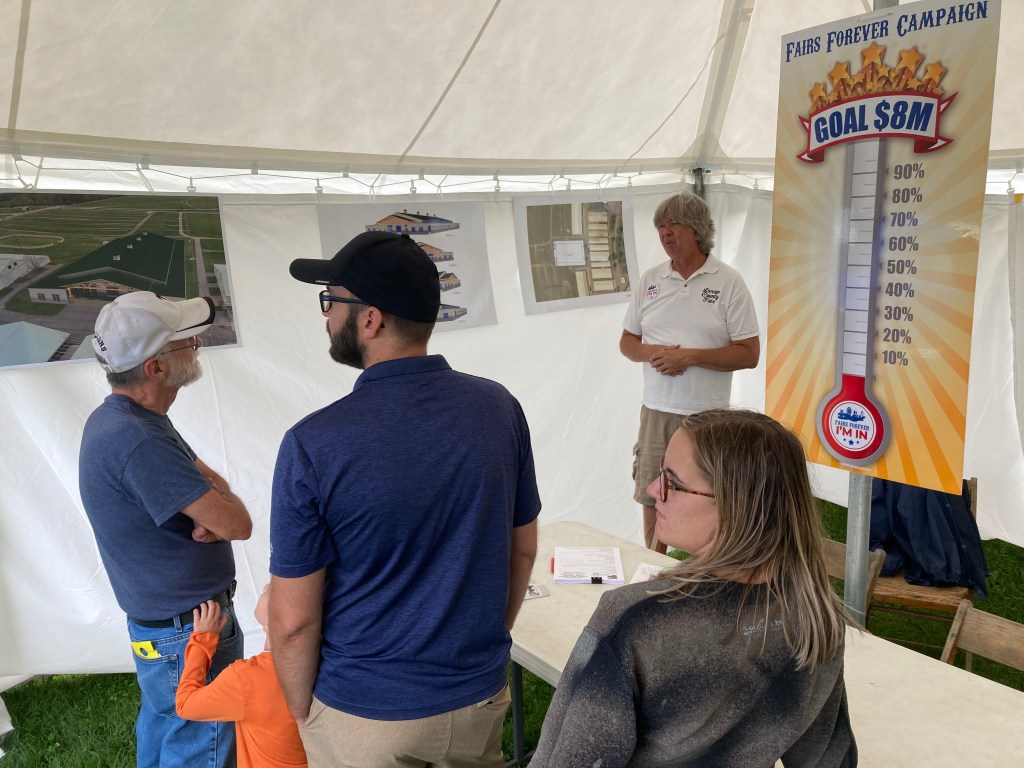 Just hours after the doors opened on August 21 for the week-long fair, fair director Kim Meyers said he had already spoken with several people about the project inside a tent. near the front door of the fair, installed specifically for the fundraising headquarters. effort.

Photos from a 45,000 square foot air-conditioned exhibition center worth $5 million were on display in the tent. Brochures describing the project and giving more details about what is planned for the exhibition center were also available. Pledge forms were also neatly placed on a table, along with buttons reading “Fair Forever I’m In” which were distributed to those who made a financial contribution.

There was also a fundraising thermometer poster on display, to track the progress of the campaign. Although fair organizers say they have raised 40% of the $8 million goal, the thermometer has yet to be updated.

“People stop and are interested and pretty excited about the project,” Meyers said of his first interactions with fair attendees.

Fair officials announced the plan for the fairground improvement project earlier this month and secured a $1.5 million contribution from Lorain County Commissioners on August 16. The plan includes the air-conditioned exhibition center, which can be used all year round. This would allow the fairground to be used for more than one week of the year it is currently in use. Fair organizers said it was not financially feasible to use the fairgrounds for just one week and expected to remain profitable. The project, which would take place in three stages, also includes the construction of an $800,000, 14,000 square foot display barn; a one-acre performance arena and parking improvements.

Renovations are expected to begin in 2023.

“People are curious for details,” about the project, Meyers said.

Wristbands will also be distributed to donors, Meyers said.

Demolition could begin as early as this fall, said Meyers, who served as the fair’s director for 18 years and participated for 20 years before that.

The fair, which is the second-largest county fair in the state, according to organizers, typically draws 120,000 people a year. Last year, the first year after a reduced version due to COVID in 2020, the fair drew 90,000 in the seven days it was open, Meyers said.