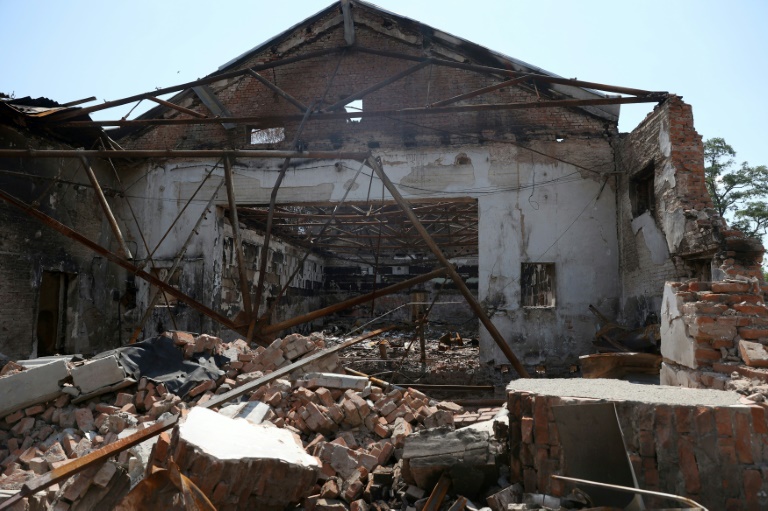 There is little Soledar left. A church, a few food shops and a hardware store in the basement.

Located right next to the frontline, this mining town in the Donetsk region in eastern Ukraine, where several thousand people still live, has been constantly bombarded for more than three months.

The terrifying sounds of explosions break the silence at regular intervals in the now ghostly town, whose name translates to “Gift of Salt” after a giant salt mine on the outskirts.

The mine, run by Ukrainian company Artemsol, normally produces millions of tonnes a year and is also a tourist attraction known for its “fairytale salt sculptures” according to brochures.

Soledar, which had a population of 15,000 before the war, is also known for an underground sanatorium to treat lung diseases.

It was before the invasion.

Soldar found himself in the path of Russian troops trying to take over the Donetsk region and came under fire from both sides.

The mine, struck several times, is now closed.

Many residents fled. According to local residents who remained, only some 2,000 people are left to fend for themselves.

The houses along the main street are half destroyed or blackened by smoke.

The cultural center was destroyed and its ruins still smell of smoke. Papers can be seen strewn about the ruins and a telephone handset sits on a desk.

“It happened on the night of July 9-10. That night a dozen missiles hit Soledar,” said Tetyana, a woman walking past with her five-year-old daughter and 67-year-old mother.

The center burned for several days without firefighters to put out the flames.

“There are no more local authorities, no more police, no more doctors, no more pharmacies. Everybody is gone. We have been abandoned,” Tetyana said.

Like an apparition, an elegant woman with short white hair walks down a deserted street with five cats.

Smiling but scared, Lyudmyla explained that her husband is disabled and cannot move.

“And then there are the abandoned cats. I can’t leave them, ”says the former teacher, heading to one of the few food shops still open.

The store is supplied by volunteers who come twice a week, braving bombardments and missile fire.

Beneath the shop in the basement is a large hardware store that has become a relatively safe meeting place for the townspeople.

The inhabitants come to buy gas canisters, nails, crockery and bed linen. It is one of the few places where neighbors can interact.

Yury, the 59-year-old shopkeeper, who has a long gray ponytail and wears a baseball cap and overalls, leans on his cane behind the counter.

Despite everything, his eyes still sparkle.

“If I let myself get depressed, it’s not good for my old bones,” he said.

But his gaze darkens when he mentions his two grandchildren aged 8 and 12 who still live in Soledar.

What do they do with their days? “They create stress,” sighs the grandfather.

He says he is keeping them occupied by building a heating unit with zinc plates “to prepare for winter”.

As in all frontline towns in eastern Ukraine, those who remain are unable or unwilling to evacuate.

Regional authorities regularly urge people to evacuate and those who remain are often seen as harboring pro-Moscow views and awaiting the arrival of Russian troops.

Sitting outside her home, Liya Cherkashyna, 84, doesn’t care about either side – she just wants someone to fill her with five bottles of water from the only working pump in town.

Yesterday someone promised to bring her water in exchange for a bottle of vodka which she doesn’t have.

From her balcony, Larysa said: “We just want peace. And silence”.