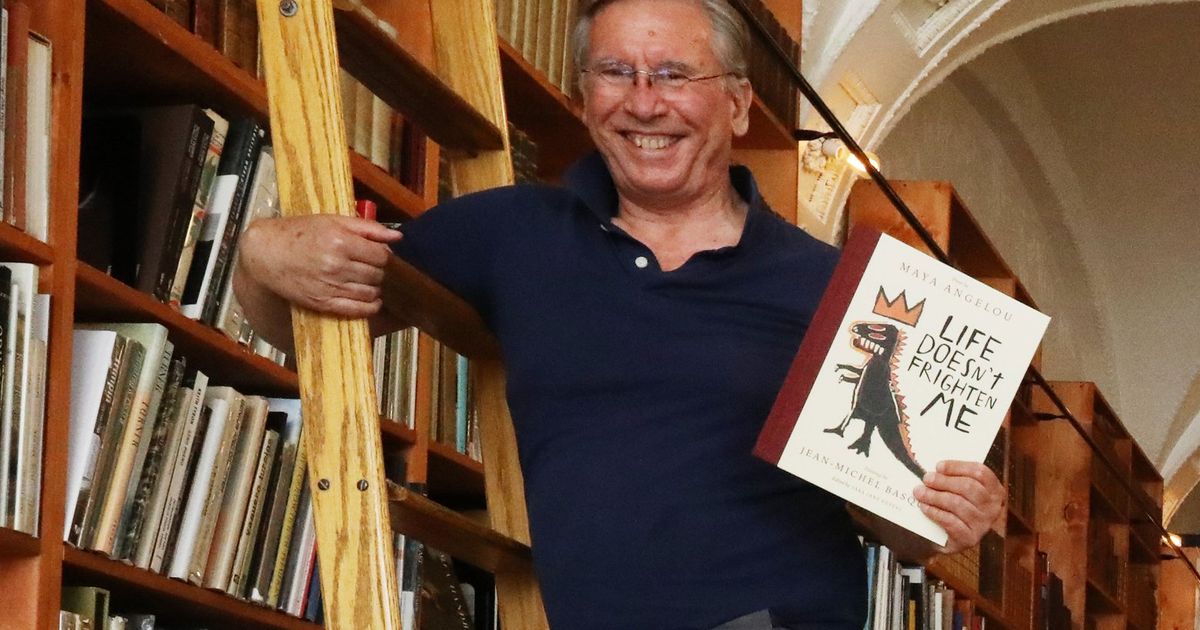 About a month after the coronavirus pandemic began to spread in Washington state, in the midst of that grim first winter lockdown, just about every business in Pioneer Square closed their windows.

No one knew exactly how long the lockdown would last, or how people would react on empty streets. Murals began to appear on the windows and boarded up doors, adding much needed color to the largely abandoned neighborhood.

One magnificent mural, in particular, stood out: Painted in soothing baby blue and a few shocking gold shocks by Amanda Joyce Bishop, the barricaded facade of Arundel Books on First Avenue showed a pair of hands, a ball of crystal, clouds and a seeing eye high above, staring at a book with floating pages. Written in large letters spanning the entire fresco is a quote from bestselling author Neil Gaiman: “A book is a dream you hold in your hands.

To Arundel Books owner Phil Bevis, that sounded like the right statement for the time: hopeful, literary, serious. The mural has become a bit of an international sensation, shared on Twitter and Reddit countless times.

When Arundel reopened under COVID-19 security protocols, Bevis kept the mural intact and hung it in the store. He contacted Gaiman’s representatives to request permission to sell prints of the limited edition mural. “They were so generous,” Bevis recalls. “When they said yes, it was the worst day of the pandemic, and that put a bit of air under our wings.” Arundel has since shipped copies of the print worldwide.

Born in Pullman, Bevis has been selling and publishing books since the mid-1980s. He opened his own new and used bookstore, Arundel Books, in Los Angeles in 1987, and in 1995 he opened a second branch in Seattle. . After more than a decade dividing his time between LA and Seattle, Bevis returned in 2010 and made Arundel a Seattle exclusive.

Arundel offers around 35,000 titles, a vibrant mix of old, used and new books. Bevis explains that “the oldest book we have in stock right now is from the 1520s, and the most recent is a book that came out yesterday.” The staff of eight booksellers follow their interests, from science to science fiction to literature in translation and a growing children’s section.

Arundel also sells prints by local artists and the shop serves as a showroom for Chatwin Books, the publisher of which Bevis co-owns. Chatwin publishes an electric array of authors, from collected works by former Seattle poet Maged Zaher to an investigation of Vashon Island-themed impressionist paintings by local artist Pam Ingalls and a new anthology documenting some of wall art displayed on Seattle storefronts during the pandemic.

Arundel lives at the intersection of Bevis’ many interests – visual art, the entire life of a book, and high quality letterpress printing. “If I was just printing and publishing, I wouldn’t be happy,” says Bevis. “And if I was just running a bookstore, that wouldn’t work either. I didn’t expect to have so much fun at this point in my career.

Like a literary glacier of sorts, Arundel slowly descended First Avenue throughout his existence. It debuted across the street from the Seattle Art Museum, but moved a few blocks south when its building was demolished to make way for the Harbor Steps. Its next location had the best balcony in all of Seattle, but a new location in the Grand Central Building in Pioneer Square was too good to be turned down.

Last February, in the middle of a snowstorm, Arundel once again moved into a beautiful and bright space at 322 First Ave. S. At 2,000 square feet, the new excavation looks roughly the same as when it was built in 1900. A series of friezes lining the vaulted ceilings depict the immigration story of the Schmidt family, the first tenants of the space and the creators of Olympia Brewing Company. Admiring the awe-inspiring view from the storefront, Bevis looks like a teenage boy in love. “Our space in Grand Central was beautiful, but there is something about this space that really makes it a pleasure to work. He has a real lightness of mind.

From launch parties of new Chatwin titles to celebrations of Seattle artist’s career milestones, Arundel is famous for his bookish, wine-fueled celebrations. Bevis looks forward to hosting readings in this new space: All of the shelves in the center of the store can be pushed apart, creating a narrow reading space with towering white columns that resembles a church lined with books.

Pioneer Square has been Seattle’s literary heart for decades. During the second half of the 20th century, Seattle readers flocked to the neighborhood to find treasures at beloved institutions like Seattle Mystery Bookshop, David Ishii, Bookseller, and Bowie & Weatherford, Booksellers. The new location in Arundel is a continuation of this tradition. Located on the corner of First and South Jackson Street, it is at the other end of the block from the original Elliott Bay Book Company location. Bevis swears the southward migration from Arundel is over.

What books do Arundel customers read?

“Our bestseller over the past few years, across the board, has been ‘Feeding Seven Generations,’ says Bevis. Captioned “A Salish Cookbook,” Elise Krohn and Valerie Segrest’s collection of Indigenous recipes using local ingredients taught readers how to cook seasonal and geographically appropriate dishes that have been prepared in the Pacific Northwest for centuries. hundreds of years.

Arundel’s second best-selling author in the past three years has made a remarkable resurgence in the charts, considering he’s been dead for nearly two millennia. Marcus Aurelius’ “Meditations” have proven popular with sailors, “which is just a delicious surprise,” says Bevis.

“Because Pioneer Square has become a hotbed for the knowledge economy, our science and science fiction sections have grown,” says Bevis. The shop sells a lot of Gaiman titles – no surprise, given the now world famous mural with Gaiman’s quote – but no author has gained popularity among Arundel’s clientele other than NK Jemisin. “We can barely keep it in stock,” he says.

Arundel has always attracted customers who love visual art. And one of the most popular artists in the store is illustrator Shaun Tan. “People are captivated by his work,” says Bevis. “He makes adult books that bring out the child in all of us, even when they’re dark enough.” Bevis is particularly intrigued by Tan’s mastery of emptiness: “He’s not afraid to leave space in an image for someone to enter.

[email protected]; on Twitter: @paulconstant. Paul Constant is a Seattle-based writer and co-founder of The Seattle Review of Books. His Neighborhood Reads series appears monthly in the Seattle Times.
Letterpress printsletterpress printing