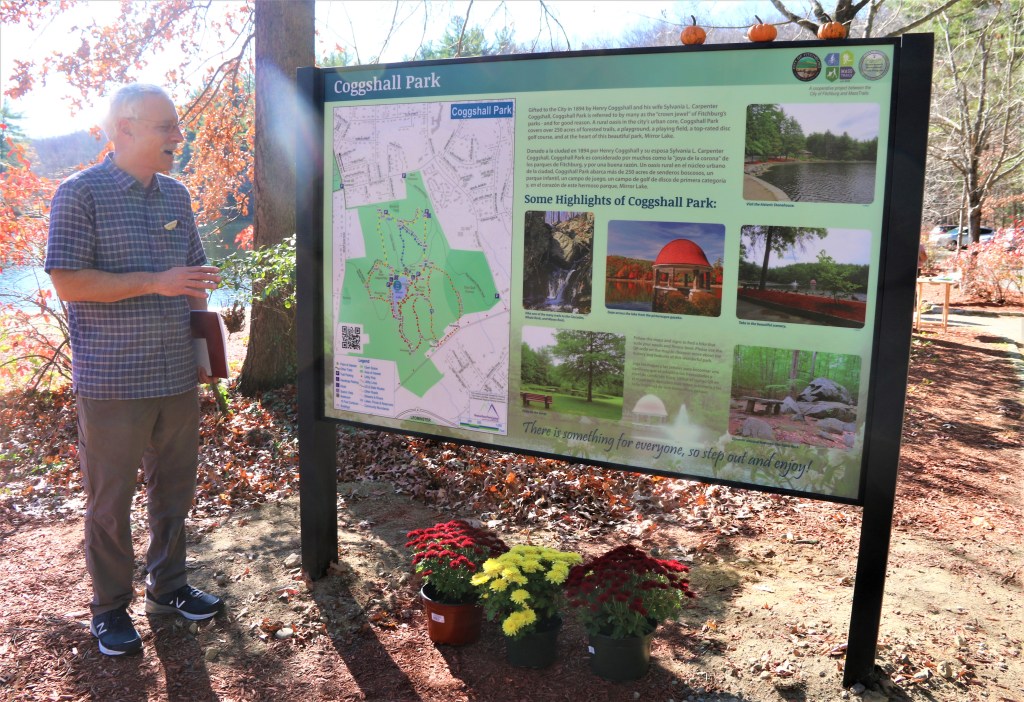 FITCHBURG — Dozens of people gathered at Coggshall Park on Monday morning to celebrate the official launch of the Fitchburg Trails wayfinding project.

“The trails are amazing,” said Mary Cringan, secretary of Friends of Coggshall Park, who grew up near the scenic open space. “We’re thrilled to bring people here, the jewel in Fitchburg’s crown.”

Fitchburg Trail Stewards volunteers installed seven kiosks and 56 wayfinding posts across the city’s extensive trail system, including nearly a dozen pressure-treated wood posts and two kiosks in Coggshall. The project is the result of a collaborative effort between the Trail Stewards and several other entities in and out of town.

Mayor Stephen DiNatale joined the group and congratulated everyone involved in the project.

“There were so many people involved in making it a reality, but no more important than Mr. Ralph Baker,” he said of the Fitchburg Trail Stewards president. “It’s a great day and a great opening.”

DiNatale called out the names of others involved in the project and noted that the stations and booths add “so much to the fact that this is one of the biggest amenities in Fitchburg.” It is one of the finest examples of the importance of community in the city of Fitchburg.

Baker humbly said “all the trails were here, we just put the signs up.”

“We don’t even know all the people who left us this legacy and what it took to create it,” he said of those who came before them to establish the trail network.

He pointed out that “if you’re on the trail system, you can find your way” through poles and kiosks, the result of a survey that informed them that people were asking for more signage on the trails.

Cringan handed out stained glass windows adorned with suncatchers with the Coggshall sign surrounded by pink and white rhododendron flowers to attendees. She said the Friends are “raising money for a handicap-accessible boardwalk” that will connect the stone house and gazebo to the park, making it ADA-accessible for concerts, weddings, and more.

Additionally, City Trails brochures have been created by the Montachusett Regional Planning Commission which lists the top ten trails in the city in both English and Spanish.

Baker thanked the city’s water and parks departments and many others who helped with the project.

“Our hope is to provide better access to these trails,” he said. “We hope more people will come out and enjoy it.”

Funding for the project came from a $40,000 MassTrails grant purchased and administered by the city and $22,000 in matching volunteer time required, which Baker says ended up amounting to well over 500 hours. Trail Stewards volunteer Jen Barlow showed off the signpost she and her boyfriend dug the hole for and set it up and talked about them removing several large boulders in the process.

New Town Parks and Recreation Director James Bunnell presented Baker and the other trail keepers with a citation to recognize their efforts. There are only a few wayfinding signs left to install, which the city’s public works department will take care of.

“I don’t know what I’m going to do with my life now,” Trail Stewards member Larry Casassa joked after sharing that he and many other dedicated volunteers spent several Saturdays digging post holes and install the panels.

A new large colorful sign placed near Mirror Lake shows a map of the Coggshall trails on one side and the town’s trail network on the other, in English and Spanish.

Leominster Trail Stewards’ Stewardship Co-ordinator Dick O’Brien also praised all the people and organizations involved in the wayfinding project and noted that most people who visit Coggshall just walk around the water.

“It’s a wonderful thing to get people to understand that it’s not just the trail around the lake,” said O’Brien, who arrived in Coggshall an hour and a half before the rally to “enjoy the paths”.

“You’ve done a wonderful job of organizing and implementing the plan,” he told stewards of the Fitchburg Trail and encouraged them and the city to apply for more grants in the future. “You are on the right track, keep it up.”