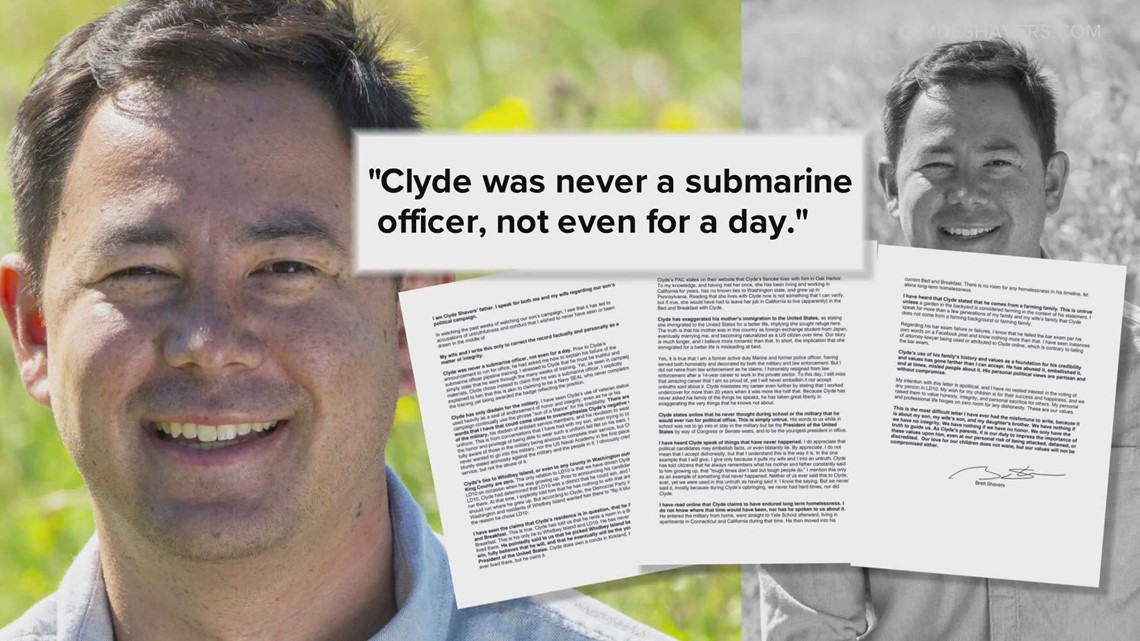 Clyde Shavers is running for a State House seat in the 10th Legislative District. Her father wrote a letter to the newspaper saying Shavers had made misleading statements.

OLYMPIA, Wash. — The editorial board of the Everett Herald newspaper overturned the endorsement of a candidate for state legislature after the newspaper said it found “serious misrepresentations” in the candidate’s work history.

On Tuesday, the board changed the paper’s endorsement from Democratic nominee Clyde Shavers to current Rep. Greg Gilday, a Republican.

Gilday is up for re-election to represent the state’s 10th Legislative District, which includes Whidbey Island, Camano Island and Stanwood.

The board said it determined in campaign materials that Shavers claimed he worked as a lawyer, although he never passed the state bar exam.

The Herald also questioned posts on Shavers’ campaign website, citing an earlier claim that he served as a naval submarine officer. The newspaper revealed that Shavers had not completed training to serve on a submarine, but instead served as a public affairs officer.

The website currently reads Shavers’ “commissioned into the nuclear submarine community” before accepting a position as a public affairs officer.

Shavers’ own father, Brett Shavers, wrote a letter to his son’s opponent about these and other claims.

In the letter, which Brett Shavers said was the “most difficult” thing he had ever written, he said he wanted to correct his son’s record “factually and personally” as a “matter of integrity “.

“Clyde was never a submarine officer, not even a day,” Brett Shavers wrote, adding that his son had “nothing but contempt for the military.”

Brett Shavers said his son failed the bar exam and shouldn’t run as a lawyer while making other false claims about his upbringing and family.

“He abused it, embellished it, and sometimes misled people about it,” Brett Shavers wrote.

In a written statement, Clyde Shavers said his father’s letter was “inaccurate and personally very painful to me as his son”.

The statement read: “To be clear, this letter is about politics only. Although I haven’t spoken to my father in some time, I know he was at the Capitol on January 6 (2021) – At the time of these texts, I was on military service in Bahrain. I contacted my dad to let him know I was safe, and he told me of his plans to go to Washington, D.C. on January 6 – This is the kind of politics that tears families apart and communities, and my campaign is about healing and moving forward.

A lawyer for Brett Shavers confirmed that Brett Shavers attended the rally in Washington, DC, but said he did not enter the US Capitol.

A spokesperson for Clyde Shavers said the candidate never identified himself as a practicing lawyer.

The spokesperson said that when Clyde Shavers registered with the Public Disclosure Commission as a candidate, he tried to enter “lawyer” on the digital form, but only “lawyer-lawyer” showed up as an option.

Clyde Shavers is a graduate of Yale Law School and “fully intends to be called to the bar next year and become a practicing attorney,” the spokesperson said.

The spokesman also said Clyde Shavers never said he was deployed on a submarine, only that he was made a nuclear submarine officer.

In a written statement, the spokesperson said: “Clyde was commissioned into the nuclear submarine community after graduating from the US Naval Academy in 2013. After graduating from Nuclear Power School in 2014 and upon completion of NPTU Prototype in 2015, he recognized that his interests lay in a different path in the Navy. After facing challenges and realizing he was not a good fit for this community towards the end of the program (because he was assigned a submarine), he discussed with his supervisor the transfer procedure in another naval community. He served 6 more years in the Navy as a public affairs officer.

Shavers’ opponent Gilday said he had never heard of a newspaper overturning an endorsement.

“I think it was the right thing to do,” Gilday said, “And because I think the letter from his dad, especially from his parents, is, you know, it’s an indictment scathing of his character.”