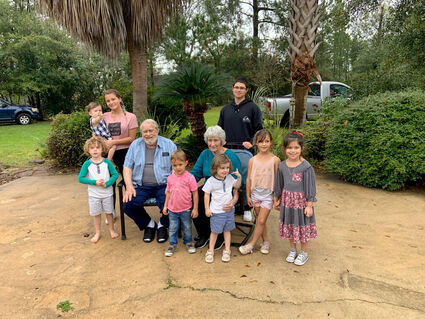 On December 31, 2021, New Years Eve, Phyl and I will be celebrating our 67th wedding anniversary. During the Thanksgiving holiday, we had our three children, five grandchildren, and eight of our nine great-grandchildren with us. Our oldest great-grandson Nate, in the Air Force, is stationed in South Dakota. It was such a joy to be with the little ones. There are four who are five years old and under. Each of them has its own personality.

When our grandchildren arrived, we were fortunate that they were raised around us. Some of the best times I’ve had was helping raise them. I used to say that I just wanted to stay long enough to see what was to become of them. I am proud to say that they are all doing well. As for the great grandchildren, I can’t hang around long enough to see what happens to them but I’m sure they will be okay. They are scattered all over the country.

What’s amazing about the nine, there isn’t a Dunn in the peloton. There will be no Dunns in the future. There are only six of us with the name Dunn, Mark, Allen, Karen, Amber, Jenna and me. Our daughter had boys and our son had girls.

Here’s how it started all those years ago. Our wedding day, December 31, 1954, was a beautiful morning and we had agreed to meet down the street from Phyl’s house at a certain time. We picked up a friend, Margaret Hunt, who had agreed to be a witness or maid of honor. She would accompany us to Kountze where a lady JP would marry us. Clarence McNelly, the clerk, would issue the license. We needed a blood test to get a permit so several days before, not knowing where to go, I stopped at Hamilton’s Clinic in Beaumont. The doctor and the employees were surprised at our request. No one married ever chose their location for a blood test because it was a hemorrhoid clinic. How the hell could this marriage ever fail with this good start. We got married and returned to Port Arthur.

Phyl attended Bishop Byrne Catholic School and had it been found out that she was married she could not have graduated in May. For the next few months, we lived apart with only Margaret aware of the marriage. Phyl has finished school and 10 months to the day. On October 31st our first child Mark was born. Two more followed, Allen two years after Mark and finally four years later, Karen, the girl Phyl was expecting. Five grandchildren and nine great grandchildren followed.

What is most surprising is how quickly these 67 years have traveled. The odds for a couple to make this many years are not very good, not only because of divorce, but also because of illness and death. If it ends tomorrow, it has been a great adventure.

Over the years, we have lost hundreds of friends, each very special. When we got married all those years ago we both had a lot of parents, today they are almost all gone.

As hard to believe, it’s been 67 years. It’s also amazing that we’ve put so much in one lifetime. This crazy start had all the elements to fail. It was really beating the odds.

Those times will pass but until then Phyl and I will enjoy the time we spend together and take one day at a time. We are truly blessed and despite some health issues we both have our mental facilities in working order. We are thankful that the Lord allows us to continue working. I write the words, she types them, and like our long marriage, one day at a time, we pull out a piece of paper and look forward to the next. It keeps us sharp and although we’re over 80, it gives us a sense of accomplishment. We would both be unhappy to be useless.

We’re just going to move on to the next chapter and hopefully another year rolls around. I don’t know what the record for being married is, but it’s something to aim for. Family, friends and being together is a good life.