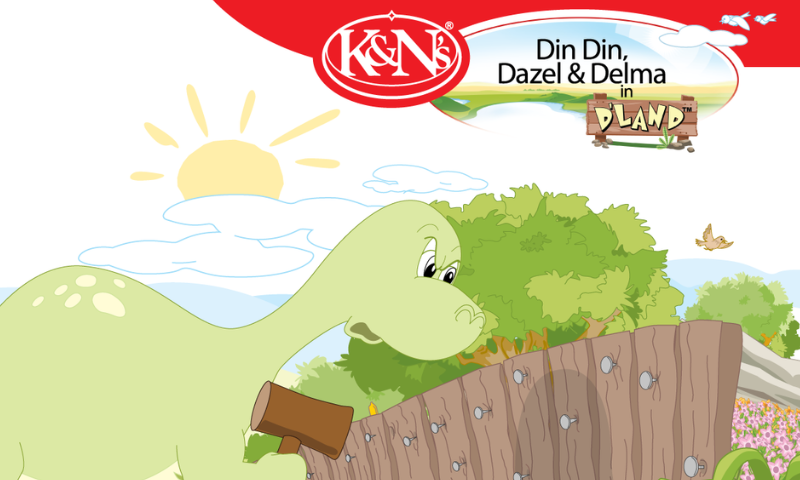 Let’s find out what Din Din is up to this week.

I can’t believe you left the Astilbe plants in the sun. They’re supposed to be planted in the shade,” growled Din Din the dinosaur.

Her younger brother Derek lowered his head, “Oh! I forgot to move them to the shade last night before I got home.”

“Just watch how its flowers start to wilt,” Din Din fumed. “It’s such a delicate plant with such feathery flowers. They’ve been in the hot sun all morning.

“I said I was sorry!” Derek repeated “I can make a mistake you know!”

“You make mistakes all the time!” cried Din Din. “Just get out of my precious garden. I thought you liked gardening, so I let you help me. If I had known how irresponsible you are, I would never have let you near my well-loved plants and flowers. beloved.”

Derek wanted to blurt out several answers but none of them would have been the appropriate thing to say to an older brother.

Instead, he just stomped towards Fruit Park where the dinosaurs lived.

His mother made him famous chocolates and the irresistibly familiar and comforting smell of chocolate melting over a fire greeted Derek as he entered her cave home.

“Hello, my dear Derek. Come and taste my chocolate. This is a new recipe I tried with hazelnuts,” his mother offered happily.

“No thanks, mother,” Derek muttered.

Mrs. Dee turned, surprise written on her face. “Are you refusing the chocolate? Something wrong, dear?”

“It’s Din Din again. He got mad at me again today because of a mistake I made helping him tend to the plants in his garden,” Derek explained tearfully. “Mother, why does Din Din get angry so easily. Every little thing seems to upset him these days. He takes his anger out on me, Don or Dave,” Derek added, mentioning his younger brothers.

Mrs. Dee came to sit next to Derek on his bunk bed which was a shelf in the wall of the cave. “I’m sorry you’re upset, my dear. Quarrels do happen between siblings. But I agree that Din Din’s temper has flared up a lot these days.”

That night when Din Din returned home, he was still in a bad mood. He refused to sit down with the rest of the family for dinner and fell asleep after taking a bath. Din Din’s father disapproved. “It’s so important for the whole family to sit together for dinner. It’s the only time of the day when we can talk peacefully and bond as a family. It’s very wrong of Din Din to turning his back on a meal like this as well as fleeing his family.”

Later, when the brothers were asleep, Mr. D and Mrs. Dee got together to discuss what exactly was bothering Din Din.

“It’s his teenage phase,” justified Ms. Dee. “There is so much pressure on children today, especially at school and with their peers.”

“I’ll talk to him tomorrow,” Mr D reassured his wife.

The next day was a Saturday and there was no school. Din Din had been in his garden since dawn weeding his plants, when his father approached him.

“You left home very early and I couldn’t meet you, so I thought I’d pay you a visit. I thought maybe you were there,” his father smiled.

Once the father and son were sitting under a shady oak tree, Mr D said, “You know Din Din, I had a bad temper when I was younger, but I worked very hard to control it. because my anger got into a lot of trouble for me. . I had started losing my close friends and my family members were starting to be embarrassed by my outbursts,” MD revealed

Din Din’s father sighed, “I don’t want you to go through the same problems. I want you to learn from my experience.

Din Din lowered his head, “But how, Father? When I get angry, I can’t control my tongue or my reactions!”

“I get it. I see you made a fence around your garden. Promise me one thing, just drive a nail through the fence every time you get mad,” MD said.

Din Din looked taken aback. How would that help him control his temper, he wondered, but he nodded in agreement. “I promise.”

That day, when he got mad at Derek for forgetting to trim the hedges in his garden, he drove a nail into his fence with all his might instead of going after his brother.

When his mother served him a beet stew he hated, he rushed into his garden and drove in another nail.

On Sunday, when Dazel doused him with water by the lake, even though he was in no mood to get wet, he kept his composure with all his will and ran for the fence to drive another nail.

By the end of that week, his fence was full of nails, but Din Din was exhausted from the effort it had taken to rush into his garden and drive a nail.

At night, his father came to Din Din’s bedside to wish him good night. “So, my son! How many nails did you manage to drive into the fence?

“Why are you congratulating me? asked a surprised Din Din.

“You see the 50 nails in the fence, but for me that’s 50 times this week that you controlled your anger and instead of going after another creature and hurting a relationship, you just ruined a fence,” Mr. D explained with a warm smile.

Din Din felt all his aggression melt away as he basked in his father’s proud smile.

“All you have to do is think before you speak and express what upset you when you are calmer. Vent your frustration in some kind of physical activity and you will definitely feel much better. And the last but not least, don’t hesitate to apologize if you’re wrong. Remember that everyone can make mistakes, including you,” said MD

“Father, thank you,” Din Din said humbly. “I don’t know what got into me lately. I was just angry at everything around me. But knowing that I can control my anger and not let it control me, makes me feel stronger. “

And that night, Din Din slept more soundly than he had in weeks.