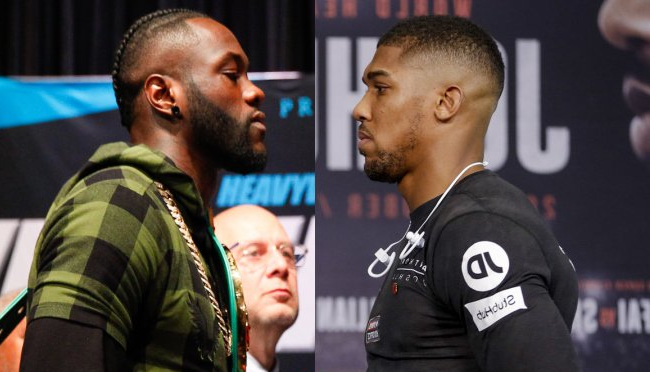 It comes after Wilder’s spectacular triumphant comeback, knocking out Finland’s Robert Helenius in the first round of their fight on Saturday night.

It was Wilder’s first fight in over a year, since suffering his second straight knockout loss to Tyson Fury.

After the fight, the “Bronze Bomber” told Fox Sports he would be interested in fighting anyone from unified heavyweight champion Oleksandr Usyk to Anthony Joshua.

His comments drew wide reactions from Nigerians on social media.

A Lagos-based OAP, Buchi Laba, via @Buchi_Laba, tweeted: “Stay retired Joshua. Tyson Fury or Wilder just want to use you as a training bag. They are levels ahead.

Nigerian journalist based in France, Babatunde Ojora, via his Twitter account @Ojbsports, added: “Back strong. Deontay Wilder knocks out Robert Helenius with a massive right hand in the first round.

Under the tweet from one of Nigeria’s social media influencer accounts, @Naija_PR, the replies comically suggested charms in the fight among other trolls of who would be fighting Wilder right now.

@Ayomiplenti said in pidgin English, “How are you going to see this nice person enter the ring with me” – meaning “how would you enter the ring to fight this kind of person?”

Meanwhile, while some were singing the praises of Wilder, others were also reminding the American of the undefeated Tyson Fury.

@the_lawrenz subtly tweeted, “Deontay Wilder beat this guy up like that because he thinks he say na Fury.”

@henry_wired even mentioned Tyson_Fury and said “@Tyson Fury coming for you”, while @b_soye tweeted “best to knock nobody out”.